Marco Rubio
stated on February 6, 2016 in the GOP primary debate in New Hampshire:
Says Hillary Clinton "believes that all abortions should be legal, even on the due date of that unborn child."

Sen. Marco Rubio of Florida, who’s known for his strong anti-abortion views, said Hillary Clinton is the extremist when it comes abortion, not him.

"Why doesn’t the media ask Hillary Clinton why she believes that all abortions should be legal, even on the due date of that unborn child," he said during the Feb. 6 Republican debate in New Hampshire.

Is it true that Clinton "believes all abortions should be legal even on the due date"?

The Rubio campaign didn’t get back to us. So we looked at comments Clinton made on the issue over the past 15 years.

Clinton has said she could support restrictions on abortions in the third trimester (about week 28 of a pregnancy) if the mother’s life and health are taken into account. Rubio casts this position as the equivalent of supporting abortions on the due date, but that exaggerates Clinton’s position.

Clinton responded to Rubio’s attack the morning after the debate, calling it "pretty pathetic."

"I think that the life and health of the mother, obviously, rape and incest, have to be always taken into account," she said on ABC’s This Week. "And, you know, when he raises the very, very difficult issue of late-term abortion, he conveniently overlooks the fact that there are medical reasons, there are health-related reasons."

We found many instances of Clinton saying abortion should be "safe, legal and rare." In short, Clinton is open to restrictions on late-term abortions provided there are exceptions for the life and health of the mother. This includes both mental health and medical complications like preeclampsia, a pregnancy complication of high blood pressure that could lead to death.

We should note that those who want a total abortion ban — a position that Rubio has expressed — see exceptions made for rape, incest and health as loopholes that undermine late-term restrictions.

Advocating for exceptions could theoretically encompass a due-date abortion, but Rubio’s conclusion that Clinton supports due-date abortions is not backed by evidence and logically unsound.

Here’s a sampling of comments Clinton's made in the past:

Sept. 28, 2015, Meet the Press Daily: "There can be restrictions in the very end of the third trimester, but they have to take into account the life and health of the mother."

June 4, 2007, Democratic presidential forum: "What I have tried to both talk about and reach out about over the last many years, going back, really, at least 15 years, in talking about abortion being safe, legal, and rare. And, by rare, I mean rare."

Oct. 8, 2000, New York Senate debate: "I have said many times that I can support a ban on late-term abortions, including partial-birth abortions, so long as the health and life of the mother is protected. I’ve met women who faced this heart-wrenching decision toward the end of a pregnancy. Of course it’s a horrible procedure. No one would argue with that. But if your life is at stake, if your health is at stake, if the potential for having any more children is at stake, this must be a woman’s choice."

When abortions can be performed

According to the reproductive health nonprofit, the Guttmacher Institute, 20 states limit abortions after "viability" (which refers to the point when a fetus can survive out of the womb) and 23 states prohibit abortions between 20 and 28 weeks.

Seven states and Washington D.C., have no time restrictions, but this doesn’t mean late-term abortions are common. In fact, only 1.2 percent of abortions occur after 21 weeks, according to the Guttmacher Institute. 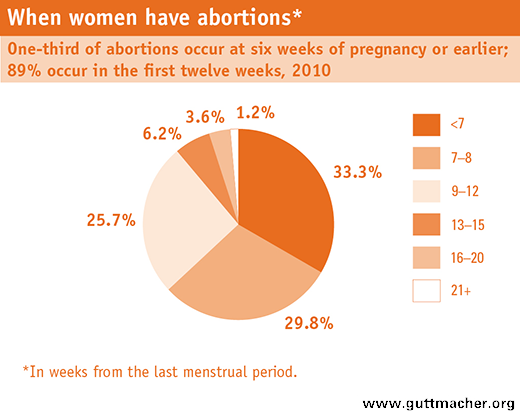 "People say we should place legal restrictions on abortion in the third trimester. The reality is the medical community is doing that in practice," said Daniel Grossman, a professor of obstetrics, gynecology and reproductive sciences at the University of California, San Francisco and an advisor at Ibis Reproductive Health. "Third-trimester abortion is very uncommon."

As for the scenario Rubio is suggesting — an abortion performed on the due date to save the life of the mother? It doesn’t exist.

"Nobody would talk about abortion on the woman’s due date. If the mother’s life was at risk, the treatment for that is delivery, and the baby survives," Grossman said. "Medically, it does not compute."

Rubio said Clinton "believes that all abortion should be legal, even on the due date of that unborn child."

Clinton does not believe that all abortion should be legal. Instead, she’s said she supports restrictions on late-term abortions except in cases of rape, incest and when the mother’s life and health are in danger. That’s not the same thing as unequivocally supporting abortions "even on the due date" of the child. Such an abortion would be a purely hypothetical scenario; doctors said such a procedure doesn't make sense medically.

Interview with Daniel Grossman, professor of obstetrics, gynecology and reproductive sciences at the University of California, San Francisco and an advisor at Ibis Reproductive Health, Feb. 8, 2016