Jason Nassour
stated on February 18, 2016 in a Facebook post:
Says Travis County Commissioner Gerald Daugherty "claims to have taken a pay cut, but for 2016, he voted to raise his salary by 19.6 percent." 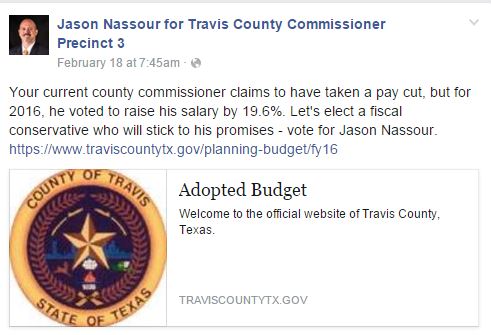 The first part of Nassour’s claim points to Daugherty touting his own fiscal frugality. On Daugherty’s campaign website, for instance, he says he has "taken an 8 percent pay decrease in each of the nine years he has been in office."

That’s nine years in two chunks: Daugherty, a businessman, recaptured the seat representing western Travis County on the five-person commissioners court in 2012 after losing the spot in 2008. The other seats, including the county judge’s post, are held by Democrats.

We asked Nassour, an Austin attorney, where he got his number for Daugherty’s vote for a steep salary increase. Nassour pointed us to a screenshot on his campaign Facebook page showing a portion of a Travis County budget document laying out the salary and benefits of the Precinct 3 commissioner in the 2014 and 2015 fiscal years and as proposed for the fiscal 2016 budget.

By phone, Nassour said: "I took this right off the county website. I’ll be the first one to come out and say I’m wrong, but I’m in the business of looking at what’s on paper."

The provided screenshot indicates $82,600 was to be spent on the Precinct 3 commissioner’s salary in 2015 and in the column for the fiscal 2016 proposed budget, the budgeted salary for the commissioner is $101,417, seemingly suggesting an even greater, 23 percent, surge than what Nassour declared. By phone, Nassour said he got the lower 19.6 percent figure by dividing $82,600 by $101,417 and subtracting the result from 1. Our sense: That’s not how to calculate the percentage difference (and by Nassour’s approach, we reached a different result, 18.6).

To get a fix on the relevant figures, we turned to county records where we couldn’t find the $82,600 salary for 2015 in posted budget documents. On the county’s website, that is, the relevant document lists the Precinct 3 commissioner salary in 2015 as $90,109, identical to what the county spent on the salary the year before.

To our request for clarification, Travis Gatlin, the county’s budget director, said it looked like Nassour compared actual amounts spent in 2014 and 2015 to the amount budgeted for the commissioner’s salary in 2016. His point: Actual amounts spent can be less than what the county budgets at the start of a fiscal year.

By phone, Gatlin also said Nassour’s source documents appeared to be out of date. While the finalized budget was posted once approved at the end of September 2015, figures showing actual spending in 2015 were updated in mid-December 2015, Gatlin said, after expenditures were finalized for the fiscal year, which ran through September 2015, and all payroll information had been  filed.

The amount budgeted  for each of the four county commissioner salaries in fiscal 2015, for instance, was $98,463. But in the 12 months, the county paid $90,109 for Daugherty’s salary, according to the budget’s 2015 actual expenditures data when we looked in late February 2016.

Even if Daugherty didn’t take all of the higher base salary, did he vote for increasing it?

When the commissioners began to consider raising their base salaries from $98,463 to $101,417, Daugherty voted against beginning the process of approving 3 percent raises for most county elected officials, according to the minutes of the body’s Aug. 11, 2015 meeting.

An Austin American-Statesman news story published about the decisive meeting quotes Daugherty saying he thought the commissioners "ought to try to lead by example in elected officials," adding he would prefer if elected officials were required to ask the county for raises rather than garnering across-the-board salary increases.

Records show, further, that Daugherty was absent from the Sept. 1, 2015, meeting at which the commissioners court set each commissioner’s 2016 salary at $101,417. Later, though, Daugherty joined his colleagues in voting for adoption of the full 2016 county budget, including the salary changes, at the body’s Sept. 29, 2015 meeting, according to meeting minutes.

"When you vote for the budget, at the end it’s sort of a formality," Daugherty told us by phone. "The budget is done at that stage … It’s one of our responsibilities, and that happens every year. You don’t vote against the budget because there’s one thing you voted against."

We shared the figures we found with Nassour, who said by phone that he believes he was misled by budget information posted by the county in September 2015. With regards to Daugherty’s reasoning on his vote for approval of the budget, Nassour said, "If you vote for the budget, you vote for what’s in it. I know that’s hard, because when you’re looking at the budget you’re looking at a lot … If there are things in the budget I don’t approve of, it’s my job not to vote for it" or "say I stand by it."

Nassour said Daugherty "claims to have taken a pay cut, but for 2016, he voted to raise his salary by 19.6 percent."

It looks to us like Daugherty initially opposed certain pay raises for 2016 including those penciled in for commissioners. Still, he later voted for the budget including the raises. However, he personally set his own increased salary at an amount some $8,400 less than the newly authorized salary for commissioners. His pay went up 3.2 percent, not nearly 20 percent.

Gerald Daugherty
stated on October 17, 2016 his campaign website:
Says he’s "taken an 8% pay decrease in each of the nine years he has been in office."

David Holmes
stated on October 17, 2016 a Facebook post and video:
Says Gerald Daugherty advocated lowering the penalty for crimes like strangulation in domestic violence cases because "they just ‘throw more people into the’" jail "‘system."

Jason Nassour
stated on February 18, 2016 a Facebook post:
Says Travis County Commissioner Gerald Daugherty "claims to have taken a pay cut, but for 2016, he voted to raise his salary by 19.6 percent."