Andrew Cuomo
stated on June 22, 2016 in a press conference in Buffalo before signing legislation to combat heroin addiction.:
"We’re losing as many people to heroin and opioid overdoses as we lost to the AIDS epidemic at its peak."

Before signing legislation to combat New York State’s growing heroin and opiate addiction problem, Gov. Andrew M. Cuomo compared the epidemic’s death toll to the number of people who died during the peak of the AIDS crisis.

"Over the past 10 years we’ve lost 10,000 people to heroin overdoses and the numbers are increasing exponentially. It is spiking. It is becoming more and more available, especially among the younger community, it’s becoming more and more accepted, and it is truly, truly a frightening and staggering increase. We’re losing as many people to heroin and opioid overdoses as we lost to the AIDS epidemic at its peak. That’s how bad this is. Think about that: The AIDS epidemic – one of the worst things that society has had to deal with, and the loss of life is just about the same with this heroin epidemic. So the numbers are staggering, and it’s frightening, and it’s getting worse," Cuomo said, referring to the country’s growing problem with heroin and opiates.

So did the number of deaths from heroin and opioid overdoses actually match AIDS at its peak?

The number of people in the U.S. who died from a drug overdose in 2014 was 47,055, which rivals the worst year of the AIDS epidemic. But only about 60 percent - 28,647 - were from heroin and opioid overdoses, according to 2014 data from the Centers for Disease Control. The federal agency hasn’t finished compiling 2015 numbers yet, and no other government entity has released anything more recent. 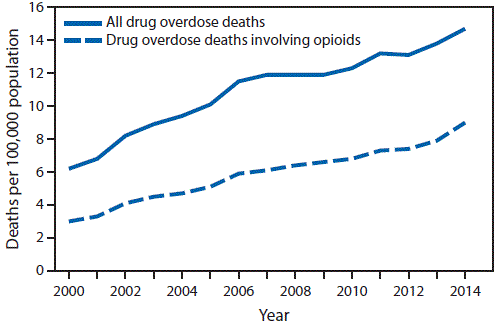 That doesn’t come close to the deaths from AIDS at the peak of the AIDS epidemic in 1995. The CDC’s mortality database, confirmed by a CDC representative, shows 43,115 deaths directly caused by AIDS that year. That’s different from the number of people who died with AIDS, which counts people who died following an AIDS diagnosis regardless of whether their deaths were related to the disease or not.

Rob Astorino
stated on June 13, 2022 in a debate
“We’ve got a parole board right now that has released 20 cop killers in the last two years under Hochul.”

What about overdoses after 2014?

From 2014 to now, have the number of people who died from a heroin or opiate overdose increased to match the number of deaths from AIDS in 1995?

To reach that level, data would have to show an increase of about 50 percent in the number of deaths from heroin and opioid overdoses between then and now. When contacted, the CDC would not speculate on whether such an increase was likely.

In Erie County, deaths from heroin or opioid overdoses more than doubled between 2014 and 2015, according to the Erie County Health Department. Dr. Gale Burstein, the Erie County health commissioner, attributed the spike partly to what’s now being dealt on the streets. Dealers now often mix fentanyl, a painkiller, with heroin to increase potency.

Cuomo’s office confirmed he was referring to the latest national data in his claim. In a phone conversation, a representative from the CDC said the agency has not finished compiling data for 2015. We base our ruling on the 2014 heroin and opioid overdose numbers.

Cuomo, in a press conference in Buffalo, said, "We’re losing as many people to heroin and opioid overdoses as we lost to the AIDS epidemic at its peak."

If he had been referring to the total number of drug overdoses, his claim would have been fine. There are more people dying from drug overdoses overall than the number who died from AIDS at the peak of the AIDS crisis. But the number of deaths from heroin and opioids alone continues to rise, more than doubling in Erie County alone between 2014 and 2015.

Email and phone conversation, Donnica Smalls from the Centers for Disease Control and Prevention, June 23, 2016

Email conversation, Courtney Lenard from the Centers for Disease Control and Prevention, June 23, 2016