Rudy Giuliani
stated on October 2, 2016 in an interview on "Meet the Press":
"The 'New York Times' writes this long story" about Donald Trump’s tax returns but "didn't point out there was no wrongdoing" until paragraph 18.

Making the rounds on the Sunday shows, Rudy Giuliani defended Republican presidential nominee Donald Trump in the wake of a New York Times story detailing how Trump reported a $916 million loss on his 1995 income tax returns and potentially avoided having to pay income tax for 18 years.

"This is perfectly legal, and the Times makes that point about 26 paragraphs into the opinion." Giuliani said on CNN’s State of the Union.

On Meet the Press, Giuliani made the same point.

"The New York Times writes this long story, and then somewhere around paragraph 18, they point out there was no wrongdoing."

So did the New York Times bury the news that what Trump did was legal?

No. Here’s the first sentence of the story.

"Donald J. Trump declared a $916 million loss on his 1995 income tax returns, a tax deduction so substantial it could have allowed him to legally avoid paying any federal income taxes for up to 18 years, records obtained by The New York Times show." 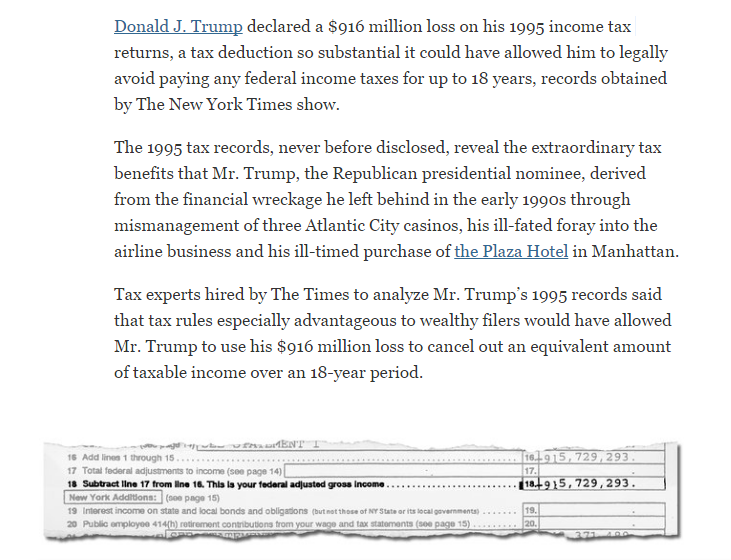 We’ll keep this short and sweet.

Giuliani’s claim is not accurate. It rates False.