David Price
stated on March 22, 2017 in a report from his Congressional office:
"Under the Republican health care repeal proposal North Carolina faces the 2nd highest premium increase in the nation. North Carolina residents will face an average cost increase of over $7,500."

As the U.S. House of Representatives prepares to vote on a plan to repeal the Affordable Care Act, North Carolina Rep. David Price said few people in the country will fare worse than North Carolinians if the repeal plan passes.

"Under the Republican health care repeal proposal: North Carolina faces the 2nd highest premium increase in the nation," according to a report released by Price’s office. "North Carolina residents will face an average cost increase of over $7,500."

The Republicans’ American Health Care Act would repeal the ACA (also known as Obamacare) and would, among many other changes, replace Obamacare’s income-based tax credits for health insurance with flat tax credits. More on all that later.

It’s no surprise that Price, a Democrat who represents a liberal area of the Triangle, is against the AHCA. But the numbers he threw out were a bit surprising.

They could also have big political consequences for the state’s 10 Republican members of the House of Representatives – if Price’s price is right.

Price’s office repeated the claim nearly verbatim in a press release and took to social media urging people to read the report.

Which version of the bill is Price talking about?

Price made this claim Wednesday, when he shared his office’s report on social media, calling the bill, "devastating for lower-income and older North Carolinians."

Note: We’re fact checking Price’s claim based on the original GOP legislation, since that was what his claim referred to. Shortly after Price made this claim, the GOP canceled a planned vote on the AHCA and re-wrote some parts of it; those changes have yet to be studied in-depth.

For a breakdown of the AHCA’s proposed tax credits and other changes, see this primer from PolitiFact or this fact-check on how it affects different income levels.

Price is talking about the effects on the more than half a million North Carolinians who buy their health insurance individually – not people who get it through their work or through government programs, like the VA or Medicaid.

Those people on the individual marketplace are about 5 percent of the state’s population. So when Price says "North Carolina residents will face an average cost increase of over $7,500," that’s a bit misleading.

The numbers are right – as we’ll explain shortly – but they don’t really apply to the average person, as Price insinuates. People who are insured through work or through government programs would see different effects than the average person buying insurance individually.

Now let’s take a look at that "more than $7,500" average increase in costs under the AHCA.

Price said that includes increases in both out-of-pocket expenses (by $5,921 on average) and insurance premiums (an average of $1,628 more).

A premium is the cost of health insurance. Out-of-pocket expenses include copays, coinsurance and deductibles.

And Price's math is solid. It’s been backed up by research by the nonpartisan Kaiser Family Foundation, a health care think tank, and by the liberal-leaning Center on Budget and Policy Priorities.

"Kaiser tends to be mechanically very sound," said David Anderson, a researcher at Duke University’s Health Policy Evidence Hub. "So if you see something from Kaiser, you can trust it."

Anderson said the number Price cited on premium increases checks out, and the out-of-pocket expense figure is either correct or maybe slightly high. He said it’s "in the ballpark … maybe a little aggressive."

Price is also correct that North Carolina’s increase would be the second-highest in the country. 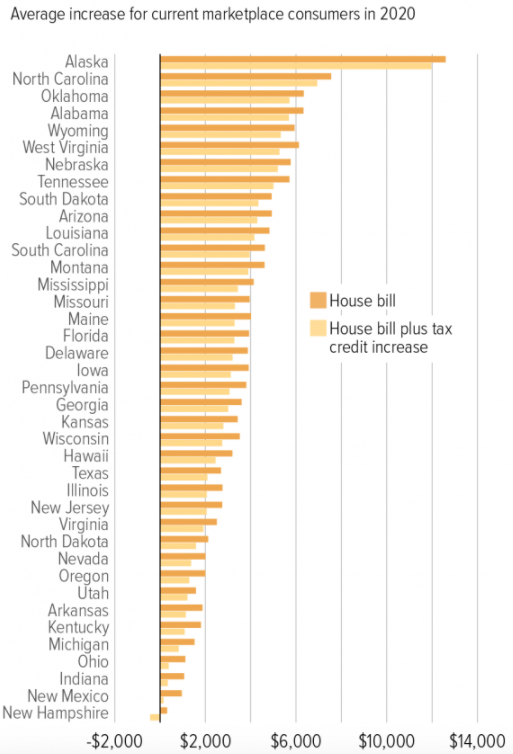 Alaska is first by a long shot, but North Carolina’s average cost increase would be about $1,000 more than in the next state, which is Oklahoma. Alaska and North Carolina are No. 1 and 2 in both average increases and average total costs, the Center on Budget and Policy Priorities found.

Why is North Carolina’s cost so high?

North Carolina also has some of the highest costs under Obamacare. Part of the reason is that it has the country’s second-largest total rural population, as well as the highest percentage of rural residents among the 10 largest states.

In rural areas where there tend to be fewer hospitals, Anderson said, insurance costs are higher. Urban areas, with more competition among hospitals, have lower health care costs.

Obamacare controls for variations like that with tax credits based on income levels and local health care costs. The AHCA would instead give flat tax credits, which would cause wide variations everywhere – especially in North Carolina.

So it’s hard to describe what would happen to a "typical" person if the bill becomes law. But here are a few examples of what could happen, as of 2020, if Obamacare is replaced by the AHCA, according to the Kaiser report. The figures include the final costs, after tax credits, for both health plans.

Those findings are in line with research from Avik Roy, a conservative health care analyst.

Roy was a health care policy advisor to the Republican presidential campaigns of Mitt Romney in 2012 and Rick Perry in 2016. Last week he wrote that "the AHCA’s approach, if left unchanged, would lead to significant spikes in net insurance premiums for lower-income participants in the individual insurance market, with particular problems for those in their fifties and sixties."

He added that North Carolina is one of seven states where customers will fare the worst under the AHCA, due to its switch from an income-based tax credit to a flat tax credit.

"A means-tested credit ... has one additional advantage over the method used currently in the AHCA," he wrote. "It does a better job of protecting those who live in high-cost states … like Alaska, Nebraska, Arizona, North Carolina, Oklahoma, Wyoming, and Louisiana."

The studies we’ve examined so far evaluate what would happen between now and 2020. That year is the turning point, according to the nonpartisan Congressional Budget Office, for when nationwide premiums might start to become lower on average.

And why would premiums, on average, go down after 2020? The Congressional Budget Office estimated 14 million people will drop their health insurance next year if the AHCA passes, and there will be 21 million fewer insured people by 2020. Many of them would be older people with high costs, so their dropping insurance would drive average costs down.

But those are national estimates. We wondered what would happen specifically in North Carolina after 2020.

Unfortunately, we don’t really know. The bulk of state-specific research into the AHCA so far has focused on its immediate impact, pre-2020.

David Price said that if the AHCA passes in its current form, "North Carolina faces the 2nd highest premium increase in the nation. North Carolina residents will face an average cost increase of over $7,500."

Price’s numbers are accurate, at least in the short term as it applies to people buying insurance on the individual market.

However, we don’t know what might happen after 2020. And the wording of Price’s claim is misleading in describing average "North Carolina residents" with no qualifier. In reality, the changes apply only to the 5 percent of people buying health insurance on the individual market.

For those reasons, we rate this claim Half True. 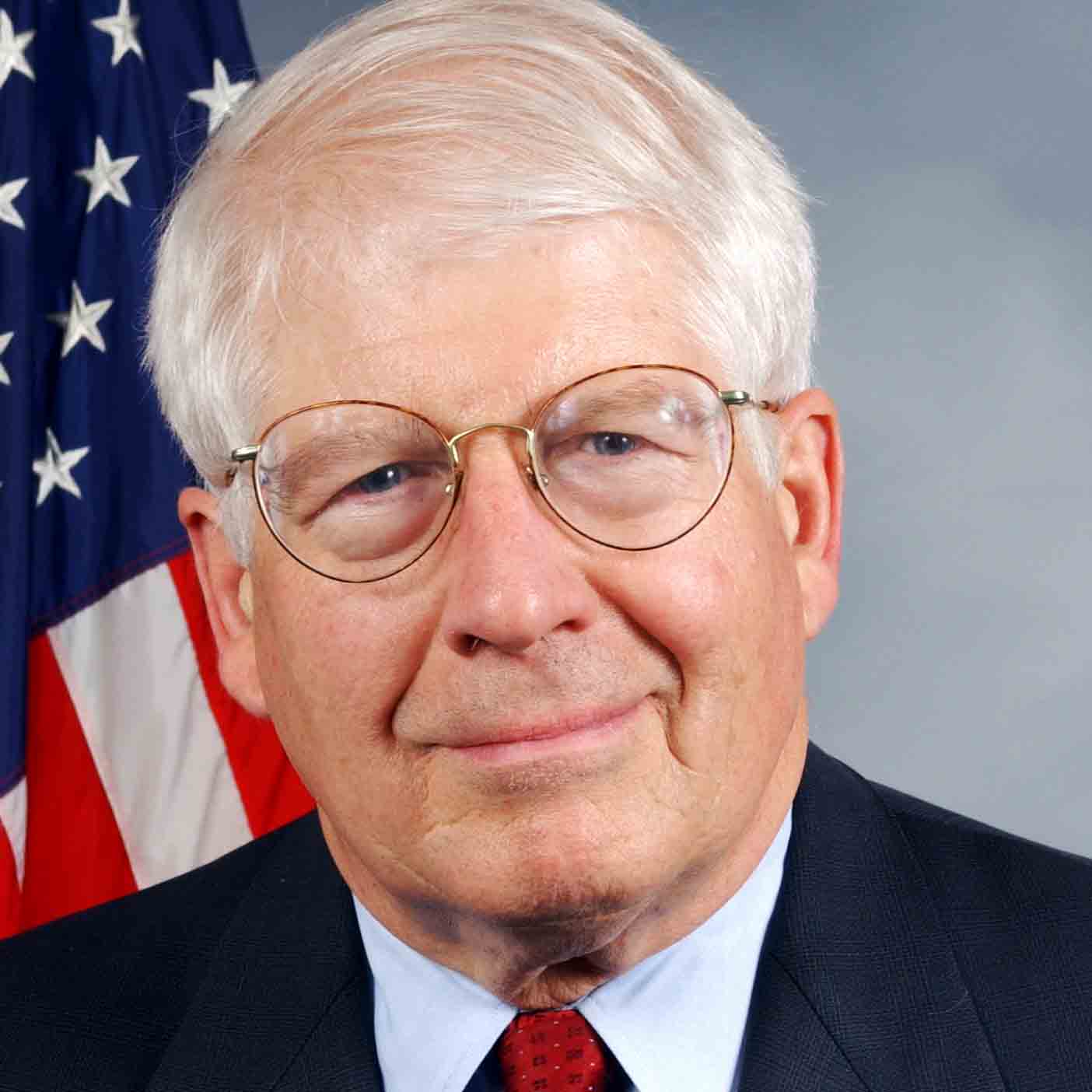 US Department of Health and Human Services, 2015 Obamacare updates, "5 Years Later: How the Affordable Care Act is Working for North Carolina"

Avik Roy, the Foundation for Research on Equal Opportunity, March 19, 2017, "How to Make Ryancare Premiums Affordable for the Near-Elderly: Means-testing the American Health Care Act’s tax credits, and adding a standard deduction, would nearly eliminate the bill’s net premium increases."