John Chiang
stated on August 13, 2017 in a Facebook live video:
"Since I’ve been the state treasurer, we’ve increased the building, construction of affordable housing by 80 percent."

State Treasurer John Chiang has made boosting California’s supply of affordable housing a key talking point during his run for governor.

Chiang, one of several Democratic candidates in the 2018 race, claimed at a recent campaign event in Santa Monica that he’s helped greatly expand that supply.

"Since I’ve been the state treasurer, we’ve increased the building, construction of affordable housing by 80 percent," Chiang said in a Facebook live video on August 13, 2017, joined by Congressman Ted Lieu. 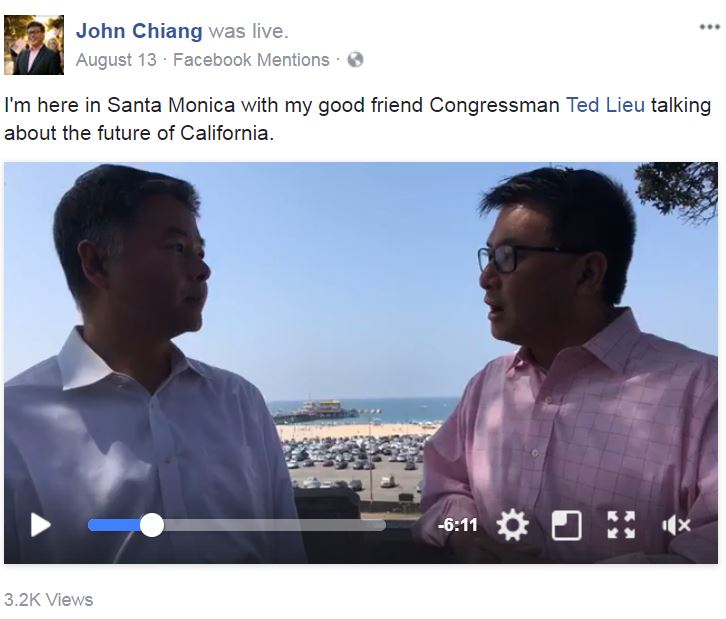 We wanted to know, however, whether Chiang was right about the pace of this construction upswing and whether he left anything out.

We asked his office for information supporting his statement about the 80 percent growth in construction since that time.

It provided data showing the number of low-income housing units constructed -- or rehabilitated -- by developers receiving one of two types of federal tax credits.

These tax credits are awarded by the California Tax Credit Allocation Committee, headed by Chiang, and are a catalyst for building affordable housing.

Matt Schwartz, president of the nonprofit California Housing Partnership, told us these credits are the driving force for as much as 95 percent of the state’s affordable housing construction each year. One type can cover more than half the cost of developing a unit while the other can cover a quarter of the cost, Schwartz said.

Schwartz clarified that these tax credits are only used on affordable rental properties.

But given that some of the construction was for rehabilitation -- something Chiang did not make clear in his statement -- we wanted a deeper look at the data.

"Most of the rehabilitations are of existing affordable housing units. That’s different than actually adding brand new units to the housing stock. That quote (from Chiang) is not spliced in a way that that’s obvious," said Carol Galante, a professor of affordable housing at UC Berkeley.

A treasurer’s office fact sheet promotes the same 80 percent increase in affordable housing units, but clarifies that those are "built or rehabilitated." 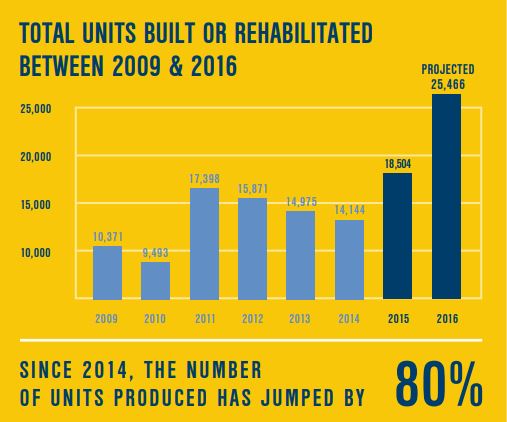 Not just a coat of paint

Representatives for the treasurer told us they’ve always interpreted the term "building, construction" as including both new and rehabilitated units.

Mark Stivers, who heads the state tax credit allocation committee, said rehabs involve far more than "just slapping paint" on an old apartment. The use of the federal tax credit for rehabilitation, he said, locks in that unit at an affordable rate for 55 years through a deed restriction.

Schwartz, of the nonprofit housing partnership, added that rehabilitation is a key part of preserving California’s limited affordable housing stock.

He added that Chiang has shown strong leadership in expanding affordable housing in the state.

Data from the treasurer’s office show an 83 percent increase in the construction -- and rehabilitation -- of affordable housing units from 2014 through 2016.

But Chiang’s claim omits the fact that less than half were new units added to the housing supply. The majority were rehabilitation projects on existing homes. Experts told us such improvements help preserve affordable housing, but don’t necessarily expand it.

A fact sheet on the treasurer’s website gets the details right.

But Chiang's statement in a campaign video and later in a Facebook post leave out this important context.

For this reason, we rate Chiang’s claim Half True.

The Los Angeles Times, "Housing construction is on the rise in California, but it's still not enough," May 1, 2017

California Department of Finance, "E-5 Population and Housing Estimates for Cities, Counties, and the State," 2011-2017