A screenshot of the ad released by Stop Deceptive Amendments, a group that aims to raise awareness about and oppose two proposed Constitutional Amendments that would limit the governor's powers.

There are six proposed amendments that would change the state Constitution.

One would require voters to show photo ID to participate in future elections. Another would enshrine the "right to hunt and fish" in the Constitution. Others would cap the state income tax rate at 7 percent and grant victims of crime the right to know specific legal information.

Then there are the pair of proposed amendments that would reduce the governor’s power by limiting his or her authority to fill judicial vacancies and shifting the responsibility for appointing elections board members from the governor to the legislature.

In the commercial, a narrator opens by asking viewers to "take a closer look at constitutional amendments Raleigh lawmakers put on the ballot this fall."

"Every former chief justice and every former governor — Democrats and Republicans — all recommend voting no," the narrator continues.

"They say these amendments are purposefully vague, a blank check for politicians who could block corruption investigations and strip all of our courts of independence, permanently. The closer you look at these misleading amendments, the worse they get. Vote no."

Each of the amendments was put on the ballot by the legislature, which is controlled by Republicans. The commercial was paid for by the Stop Deceptive Amendments political committee, which is treasured by Michael Weisel. Weisel is an elections attorney who the Associated Press recently described as a prominent figure on the political left.

The group bought airtime with WRAL-TV in Raleigh and Charlotte’s WSOC-TV, the Charlotte Observer reported Tuesday.

Given that most North Carolinians are likely more familiar with governors than former chief justices, let’s turn our attention there. Is it true that every living former governor — including Republicans Pat McCrory and Jim Martin — opposes each of the six amendments?

While all former governors made news recently for opposing the amendments that affect the governor’s office, McCrory reaffirmed his support of the voter ID, victims’ rights, tax cap and hunting and fishing amendments during his radio show Monday morning. "It’s a false and misleading ad," McCrory said on WBT Radio in Charlotte.

He also said he sent a letter to various media stations asking them to stop airing the ad, and threatened legal action if they don’t.

"I demand that you immediately take down these advertisements, since they falsely impute to me a position which I have vocally opposed in the media, and further because such falsehoods inflict ongoing damage both to my reputation and to the campaign to pass Marsy’s Law, on which I am a prominent supporter and endorser," the letter says.

Marsy’s Law is another name for the victims’ rights amendment. Chris Sinclair, an advocate for the proposed amendment, emailed PolitiFact a photo of McCrory speaking at a Marsy’s event at Latta Park in Charlotte on Sept. 10. 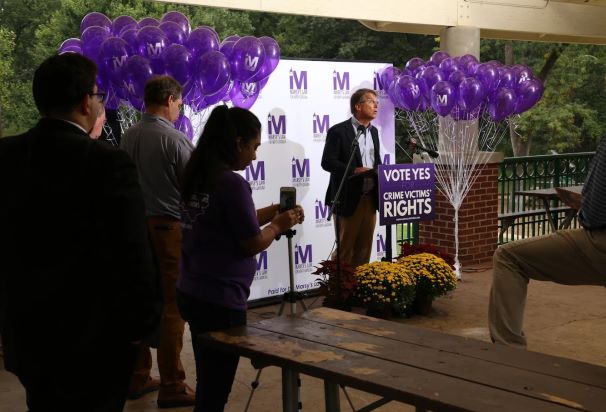 Martin, for his part, told us in an email that he holds the same view of the amendments that McCrory does.

"Personally, I am opposed to the two previously identified amendments that remove appointive authority from the governor and transfer it to the legislature (for all practical purposes, to its leadership)," Martin’s email says. "They appear to be the last two of the referendum amendments on all ballots. I am not opposed to the other amendments."

Weisel, when contacted by PolitiFact, referred us to Stop Deceptive Ads spokesman Justin Guillory. Guillory said Tuesday the ad doesn’t, in fact, suggest that all former governors oppose all of the constitutional amendments. 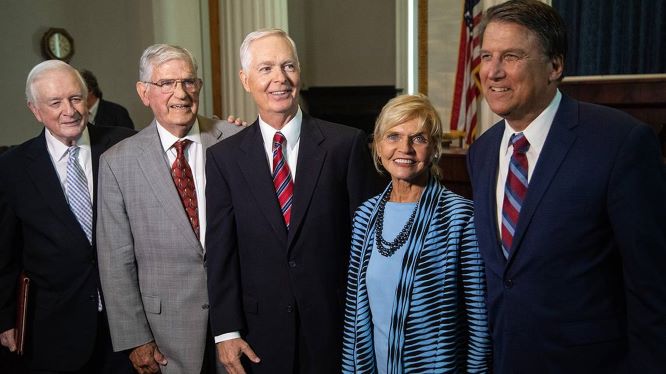 "We appreciate Gov. McCrory’s bipartisan leadership in opposing these two amendments and that’s why we chose to feature the five former governors in our ads," he continued. "Part of what is confusing about these constitutional amendments is that the legislature didn’t allow titles or any other identifiers on the ballot. There are no titles for us to reference in an ad."

Guillory has a point: The amendments on the ballot will lack numbers or titles. (Read them on the N.C. Secretary of State website.)

What the ad says

Let’s look again at what the narrator says.

Guillory says the ad is talking only about the two amendments related to gubernatorial powers. He says the narrator alludes to those two when saying they would "block corruption investigations and strip all of our courts from independence."

But the ad makes no clear distinction between the two amendments affecting the governor’s powers, and the four others.

The narrator says, "Take a closer look at constitutional amendments Raleigh lawmakers put on the ballot this fall." There’s no reason viewers would think to look at only two of them, specifically.

Immediately after that, the narrator says: "Every former chief justice and every former governor — Democrats and Republicans — all recommend voting no."

Wednesday evening, Guillory sent an email announcing that the group had changed the ad.

In the new version, the narrator begins the ad specifying the amendments that affect the governor’s power.

"Take a closer look at two constitutional amendments Raleigh lawmakers put on the ballot this fall," the narrator says.

Guillory says Stop Deceptive Amendments stands by its original version, but that "defeating these two amendments is more important than a political spat.

"We’ve sent a revised version of the ad to TV stations that clarifies which two amendments the five governors oppose," Guillory said.

"We continue to appreciate Gov. McCrory’s bi-partisan leadership in opposing these two amendments and the courage it takes for him to confront the legislative leaders of his own party. We look forward to working with leaders of both parties to defeat these two dangerous and misleading amendments."

The original Stop Deceptive Amendments commercial suggests that every former North Carolina governor opposes all six constitutional amendments. That’s not true. McCrory and Martin (the only two former Republican governors who are still living) oppose the two amendments that affect the governor’s powers, but support the other four amendments. While PolitiFact appreciates the group’s effort to be more accurate, we must set the record straight for those who have already seen the original ad and rate this claim False. 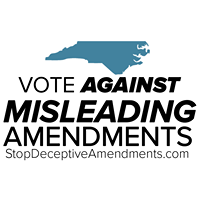