Rep. Tom McClintock, R-Calif., is a strong supporter of President Trump and his efforts to build a wall along the U.S.-Mexico border.

The congressman, who represents the suburbs east of Sacramento and much of the Sierra Nevada, says building a wall is a necessary step to achieve border security.

He made that argument during a speech on the U.S. House floor last month, which PolitiFact California readers suggested should be fact-checked.

One statement in particular stood out:

We fact-checked that startling claim.

Immigration researchers say there is no comprehensive national database or study tracking how many people have been killed by undocumented immigrants or the nationality of their victims. Law enforcement officials in many states do not ask suspects for their immigration status.

An estimated 10.7 million unauthorized immigrants lived in the United States in 2016, according to a report this month from the Pew Research Center. That figure was the lowest in a decade and represented about 3.3 percent of the country’s population. Certainly, some undocumented immigrants do commit violent crimes.

Asked to support the claim of 1,800 murders, McClintock’s office pointed, without explanation, to a report by the U.S. Immigration and Customs Enforcement, or ICE, titled Fiscal Year 2017 ICE Enforcement and Removal Operations Report. 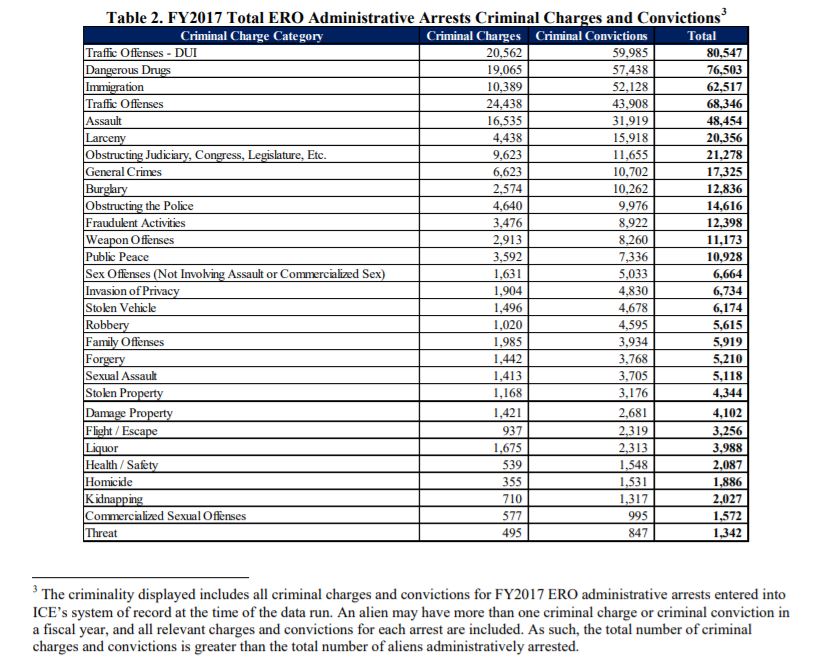 McClintock’s office pointed to a 2017 ICE report, which includes the above data on homicide convictions and other offenses by "arrested aliens." The crimes listed, however, did not necessarily take place in 2017, but instead over many years, according to immigration experts.

The document summarizes ICE’s deportation efforts, including removing people in the country illegally following their prison terms for crimes from traffic offenses to homicide.

We asked several immigration experts to assess the report with a special focus on a chart that McClintock likely used for the 1,800 figure. The experts said that number is greatly inflated and that a closer inspection shows it does not represent murders in 2017, as the congressman claimed, but instead represents homicide convictions amassed over a much longer period of time.

"1,800 murders by illegal immigrants is insanely and outrageously high," Alex Nowrasteh, a senior immigration policy analyst at the Cato Institute, a Libertarian think-tank, wrote in an email. "Illegal immigrants, about 3.75 percent of the population, did not commit 10.4 percent of murders in the U.S.," in 2017.

There were 17,284 homicides in the United States in 2017, according to FBI crime data, which does not include information on immigration status.

‘Not a definitive source’

Nowrasteh said McClintock’s 1,800 figure (actually 1,886 in the report) represents a combination of homicide charges (355) and homicide convictions (1,531), mostly for people who were released from prison and taken into ICE custody in 2017 for deportation. But the homicides, he said, took place "over the last several decades," and not in a single year.

An ICE spokeswoman said she had no information about when the crimes occured. She also could not say how many of the 355 homicide charges resulted in convictions.

"It’s not really a definitive source," added Louis DeSipio, a professor of political science at University of California at Irvine, who specializes in immigration.

The tally of 1,886 homicide convictions "doesn’t necessarily mean the people committed the crime in 2017," he said.

DeSipio added that the report appears to include not just unauthorized immigrants, or "illegal aliens" as McClintock described them, but also potentially the much larger group of legal permanent residents.

Asked about this, the ICE spokeswoman said the vast majority of individuals taken into custody by the agency are in the country illegally.

Charis Kubrin, a criminology professor at University of California at Irvine, questioned whether the report lumped in lesser crimes with homicides, given footnotes that discuss "the criminal background" and "all criminal charges and convictions."

The ICE spokeswoman said that was not the case.

"It’s a muddling kind of way to present the data," Kubrin said. "And I can see why someone would look at 1,886, go over (in the report’s same table) and look at ‘homicide’ and want to make that claim. But that claim is incorrect."

A spokesman for McClintock said the congressman "stands by his speech." He noted that Vice President Mike Pence made the same claim last July.

Looking at past fact checks, McClintock isn’t the first to distort the facts on this topic.

In December, PolitiFact National fact-checked a viral Facebook post that claimed: "2,000 illegal aliens were arrested by ICE in 2017 for murders committed here in the United States!" PolitiFact rated that claim False after finding it also misinterprets ICE data, and noting the offenses in the agency’s report could have been accumulated over many years.

In that case, immigration experts told PolitiFact there is no comprehensive data on homicides committed by unauthorized immigrants.

"There is no way to count it because no one keeps track," Jessica Vaughan, director of policy studies at the Center for Immigration Studies, a think-tank that favors low levels of immigration, told PolitiFact.

Randy Capps, director of research for U.S. programs at the Migration Policy Institute, also told PolitiFact "the homicides could have been committed at any time, not in a single year."

There is no comprehensive database that tracks these figures.

Immigration researchers said the 2017 ICE report McClintock relied on does not support his claim and that the 1,800 figure is greatly inflated.

The report tallies 1,531 homicide convictions and 355 homicide charges for people taken into ICE custody in 2017 for deportation, some after completing prison terms for their crimes.

The convictions, however, represent crimes that took place over potentially several decades, and not necessarily in 2017, according to immigration experts. There’s also no accounting for how many of the homicide charges led to convictions.

Additionally, the figures may also include some legal permanent residents, a group that’s much larger than those who are in the country illegally.

Overall, we found McClintock’s claim is a severe exaggeration and misrepresents the information in the report.