When Chris Wallace of Fox News asked Democratic presidential candidate Kirsten Gillibrand what can be done to stop shootings like the one in Virginia Beach, she wasted no time in laying blame on President Donald Trump.

Gillibrand focused on bump stocks, the gun accessory that uses recoil to effectively turn a semi-automatic rifle into a fully automatic one — that is, from a weapon that requires a trigger pull to fire each round to one that shoots a steady stream of rounds with one trigger pull.

Bump stocks gained wide attention after they were cited as a major reason why a shooter in Las Vegas on Oct. 1, 2017, was able to kill 58 people and injure almost 900 attending a music festival.

In the June 2 town hall, Gillibrand said, "Stop being beholden to the (National Rifle Association), like President Trump is. … Remember after the shooting in Las Vegas, he said, ‘Yeah, yeah, we’re going to ban the bump stocks.’ Did he ban the bump stocks? No, because the NRA came crashing down and said, ‘Don’t you dare do any restrictions on our guns around this country.’"

A reader asked us to fact-check Gillibrand’s statement. We found that Gillibrand’s statement flagrantly disregarded the facts. Asked in the town hall about how to curb mass shootings, her answer was to attack — incorrectly — an instance in which Trump actually accomplished a goal that gun critics had sought, and where the administration directly disregarded the NRA, which had opposed an all-out ban.

Bump stocks are now illegal in the United States, and it’s directly because of actions by the Trump administration. "The senator is wrong," said Harold Corzine, a University of Central Florida sociologist who has studied gun policy.

Once the role of bump stocks in the Las Vegas shooting became clear, Trump said he’d be open to banning the device. Just over two months after the Las Vegas shooting, the federal Bureau of Alcohol, Tobacco, Firearms and Explosives began the formal regulatory process of reviewing whether bump stocks should be banned. Trump publicly reiterated his support on Feb. 20, 2018, signing a memorandum "directing" the attorney general to propose regulations to ban all such devices.

The final rule was published on Dec. 18, 2018, with acting Attorney General Matthew Whitaker announcing that bump stocks "fall within the definition of ‘machine gun’ under federal law, as such devices allow a shooter of a semiautomatic firearm to initiate a continuous firing cycle with a single pull of the trigger."

The NRA issued a statement after the final rule saying that it opposed an outright ban and had asked for an amnesty period in the rule. Neither request became part of the regulation.

The Firearms Policy Coalition and individual pro-gun critics (but not the NRA) challenged the new rule in court, but the critics of the ban lost at the U.S. District Court level in February 2019. The following month, the Supreme Court declined to hear the case, allowing the ban to go into effect.

The ATF has a web page on how to destroy bump stocks in a way that satisfies the new rules, and one major seller of bump stocks, RW Arms, turned over its remaining inventory to the ATF to be shredded on March 26, 2019. 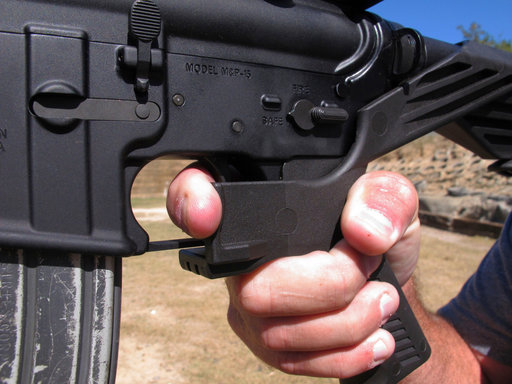 A shooting instructor demonstrates the grip on an AR-15 rifle fitted with a "bump stock" at a gun club in North Carolina in 2017. (AP)

Groups that favor stronger gun laws applauded the move, though some criticized how long it took and the fact that the ban was done through the regulatory process rather than by a law passed by Congress.

Gillibrand’s national press secretary Evan Lukaske said the senator was referring to the NRA’s opposition to — and seeming ability to block — congressional legislation on bump stocks, and the 10-month lag between Trump’s expression of openness until the final rule was published.

"Sen. Gillibrand acknowledges that five months after the Las Vegas shooting, President Trump issued a ban that was enacted in December 2018, much to the NRA's chagrin," Lukaske said. "Her statement supports the larger point, that the NRA uses money and influence to control members of the Republican Party, and prevent common sense gun reforms that the vast majority of Americans and gun owners support."

Such concerns, however, do not get at the point of her town hall remark. She left the strong impression that bump stocks are still legal, and that Trump went back on his word. Both assertions are flatly incorrect.

White House, "Presidential Memorandum on the Application of the Definition of Machinegun to ‘Bump Fire’ Stocks and Other Similar Devices," Feb. 20, 2018

Federal Register, "Application of the Definition of Machinegun to ‘Bump Fire’ Stocks and Other Similar Devices, a Proposed Rule by the Alcohol, Tobacco, Firearms, and Explosives Bureau," Dec. 26, 2017

Knoxville News-Sentinel, "Bump stocks, which allow rifles to mimic automatic weapons, are now illegal to own, buy or sell," March 26, 2019

CNN, "Virginia Beach victims: One had four decades with the city; another was filing for a permit," June 3, 2019