Gavin Newsom
stated on June 18, 2019 in a tweet:
Says "For the first time in our state’s history, the Pride flag has been raised at our State Capitol!!"

The rainbow flag, a symbol of LGBTQ pride, flies over the California state Capitol in Sacramento on June 18, 2019 / Capital Public Radio

Gov. Gavin Newsom claimed his administration raised the rainbow flag, a symbol of LGBTQ pride, at the state Capitol "for the first time in our state’s history" this week.

But a front page newspaper photo and article from 1990 show otherwise.

To clear this up, we set out on a fact check.

The San Francisco-based Bay Area Reporter, which serves the gay, lesbian, bisexual and transgender communities, published the article on October 18, 1990. It shows the rainbow Pride flag flying over the Capitol on National Coming Out Day, on the main pole below the national and state flags, one week earlier, on October. 11, 1990 . 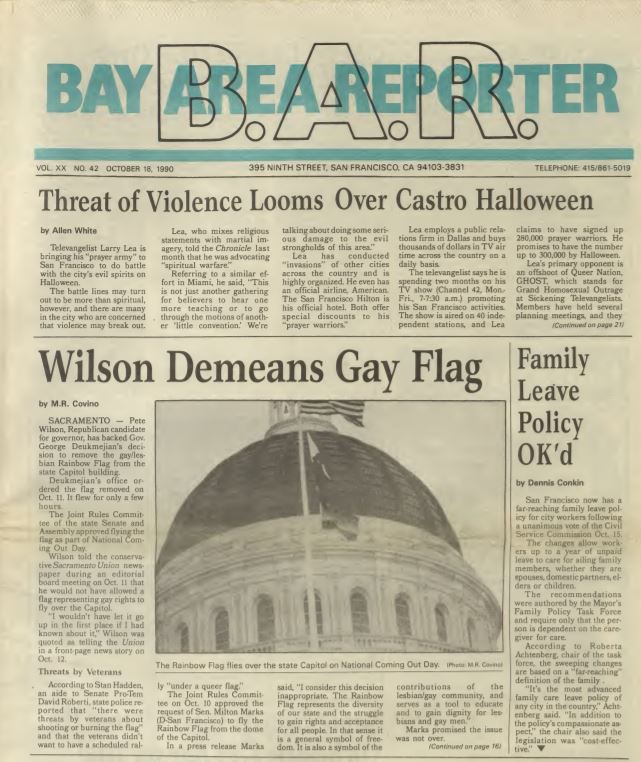 "The flag ended up being flown for only a few hours that day," an article in the Reporter reads this week. It cites its own report from three decades ago: "Then-governor George Deukmejian ordered the flag to be taken down shortly after it was raised." The article states that police received threats from veterans who said they planned to shoot or burn the flag.

The Pride flag that was raised in 1990 wasn’t a stunt. It was sanctioned by the Joint Rules Committee of the California Senate and Assembly, and was the result of work by LGBT state Senate staffers and activists.

"We followed all protocols," Ken Topper, who worked at the time for then-state Senate Leader David Roberti, told PolitiFact California.

"It wasn’t an easy thing to do," added Michael Bosia, who also worked in the state Senate at the time and is now a political science professor at Saint Michael’s College in Vermont. "It was something that was really powerful and evocative and hopeful."

The Reporter announced in an article one week before the raising that the Rules committee approved the decision. 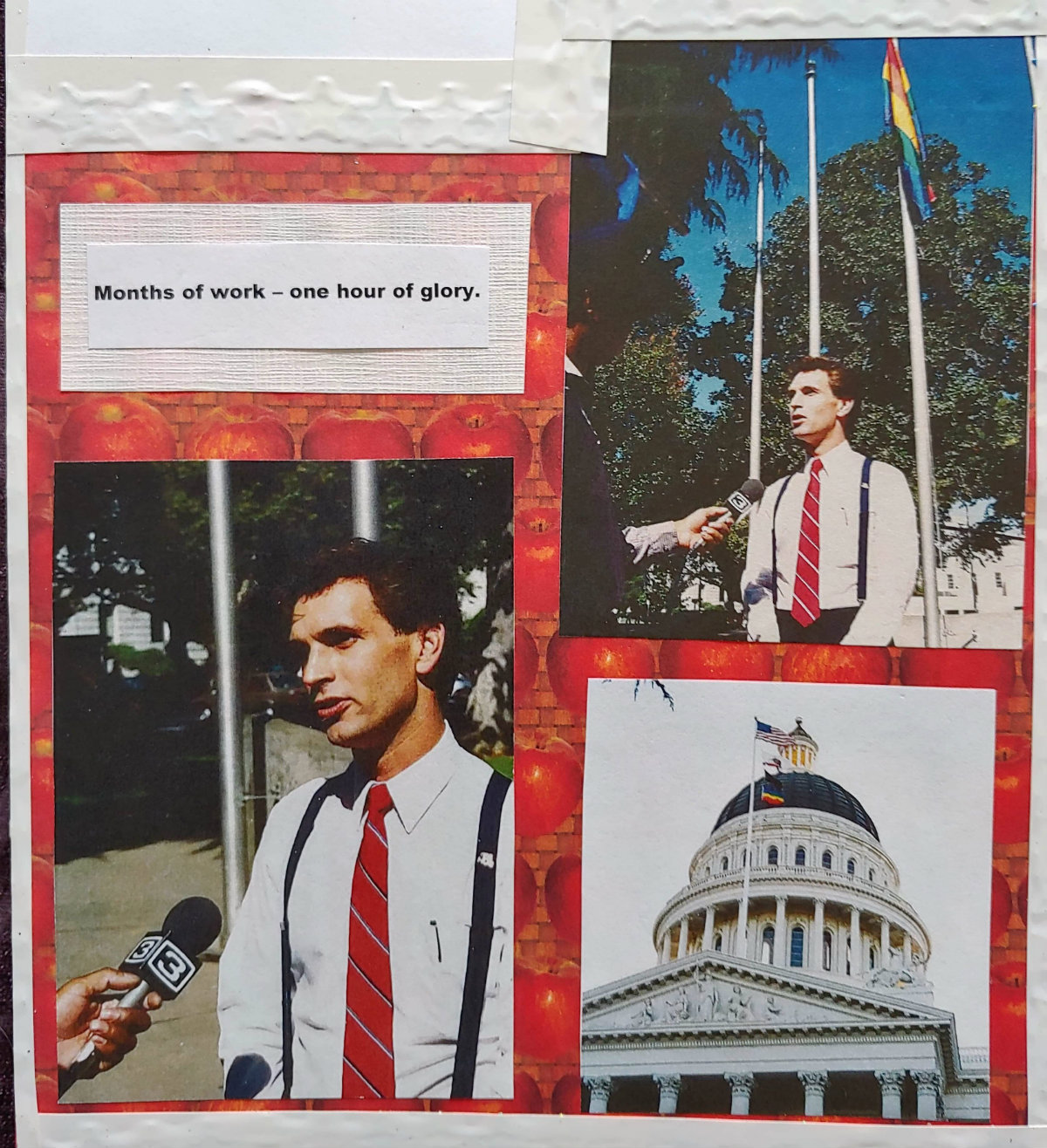 Aaron Lieberman
stated on April 28, 2022 in an ad
"Kari Lake has been appearing at rallies with neo-Nazis," while "two federal juries have found" Katie Hobbs "guilty of racial discrimination."

In a written statement, Newsom said he had been unaware of the 1990 episode.

"While this is the first time the LGBTQ Pride flag has been flown above the Capitol to commemorate June as LGBTQ pride month, I have learned that there were three hours in 1990 where the flag flew there previously. This piece of our state’s history deserves to be called out and recognized.  News reports from the time tell of a group of activists and legislators who quietly orchestrated the flag to be flown to commemorate National Coming Out Day. It was an act of visibility and defiance. After a short time on display, Governor Deukmejian was alerted to the flag’s existence and ordered it to come down, telling media it was "mistakenly" raised."

Earlier this month, U.S. embassies were denied permission by the Trump administration to fly the rainbow flag in honor of the LGBTQ Pride Month, according to CNN.

Support for flying the flag is far greater in California. Newsom said he fully supported the effort, in contrast to Deukmejian three decades ago.

"In California, we celebrate and support our lesbian, gay, bisexual, transgender and queer community’s right to live out loud — during Pride month and every month," Newsom said in a news release. "By flying the pride flag over the State Capitol, we send a clear message that California is welcoming and inclusive to all, regardless of how you identify or who you love."

The news release acknowledged this isn’t the first time the rainbow flag has appeared at the Capitol. "The flag has previously been hung over balconies both inside and outside of the building and the Capitol dome was illuminated in rainbow colors in June 2015," it read.

Newsom said the rainbow flag will fly atop the Capitol through July 1.

Newsom claimed his administration raised the rainbow flag at the state Capitol "for the first time in our state’s history" this week.

A newspaper photo and article from 1990 show the flag flew atop the Capitol three decades ago, for a few hours. Two former state Senate staffers told us a joint Senate and Assembly committee authorized the move.

Newsom was wrong about this being the "first time in our state’s history" that the flag flew atop the Capitol.

The raising in 1990 went through protocols, was sanctioned and announced ahead of time in a Bay Area newspaper.

Newsom acknowledged in a subsequent statement that this "piece of our state’s history deserves to be called out and recognized."

Even so, we rate his initial claim False.

PolitiFact Rating:
False
Says "For the first time in our state’s history, the Pride flag has been raised at our State Capitol!!"
Gavin Newsom
California governor
https://twitter.com/GavinNewsom/status/1140671980900769794