Facebook posts
stated on January 15, 2020 in a Facebook post:
Sex traffickers are using a zip-tie contraption on the door handles of vehicles “to trick females into looking down and digging for something in their purse to cut with ... Once they’re distracted, boom! They are quickly forced into another vehicle, never to be seen again by their people.”

Social media users are warning women to be careful if they discover zip ties looped around the door handles of their cars and the cars parked nearby.

"Sex traffickers are using this contraption to trick females into looking down and digging for something in their purse to cut with after returning to their vehicle and seeing this," the posts, including one posted to Facebook on Jan. 15, say. "Once they’re distracted, boom! They are quickly forced into another vehicle, never to be seen again by their people."

Human trafficking is a legitimate threat that affects millions of people. But the method isn’t as widespread as the social media posts make it out to be.

The posts are similar to another alarmist hoax we debunked related to zip ties and sex trafficking. 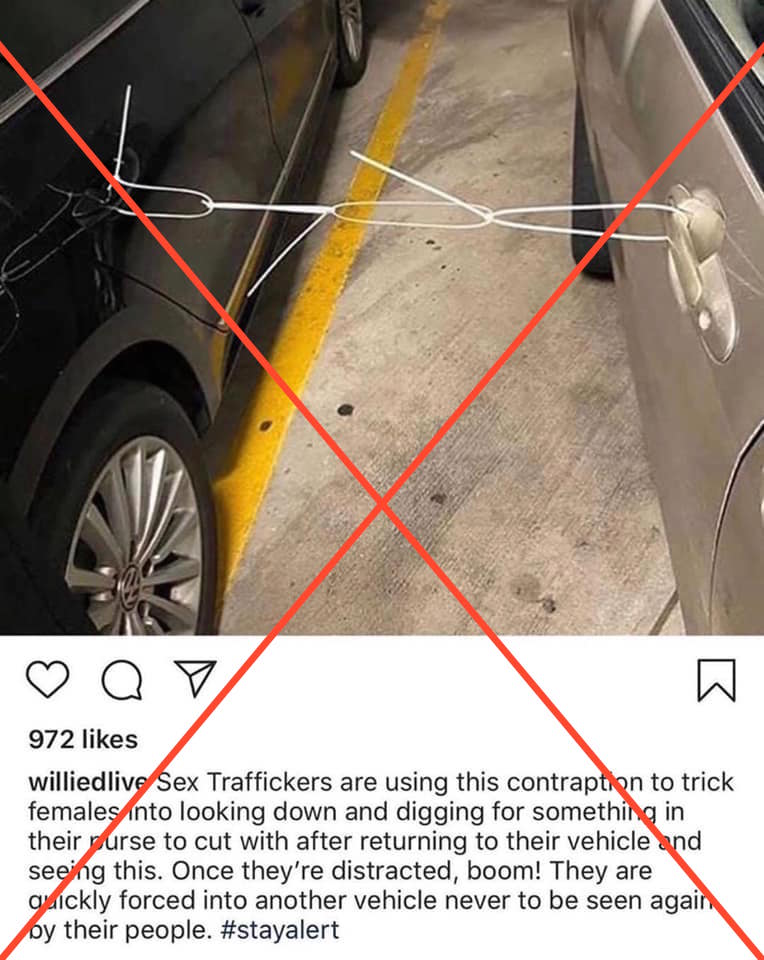 A screenshot of a viral Facebook post warning women about a zip-tie contraption allegedly used by sex traffickers to distract women.

We searched news archives for reports of sex traffickers using zip ties and found no record of the contraption described in the social media posts being used to distract women at their cars.

We read about these posts in multiple reports from news outlets in Canada. According to those reports, the image started making the rounds in January, with posters claiming an incident occurred at a mall in the city of Burnaby. A separate post circulating at the same time said sex traffickers were also placing $100 on car doors as a different form of distraction.

Burnaby police said on Twitter that they were aware of the posts and that they were "unable to find any report or investigation that fits this criminal activity." They said the information in the posts was causing "unnecessary concern" to city residents.

The FBI declined to comment when asked if incidents involving the zip-tie contraption had cropped up in the United States.

The Polaris Project, a nonprofit organization that works to combat human trafficking, said they haven’t identified the method as a trend.

Human trafficking often occurs between people that know each other, rather than complete strangers, and it doesn’t always involve a form of physical restraint, the group said.

"By far the most pervasive myth about human trafficking is that it always — or often — involves kidnapping or otherwise physically forcing someone into a situation," the Polaris Project said. "In reality, most human traffickers use psychological means such as tricking, defrauding, manipulating or threatening victims."

Shared Hope International, a nonprofit, Christian organization with a similar mission, told us that "trafficking victims are generally not kidnapped or taken away from their families abruptly."

The bottom line: It’s important to stay aware of your surroundings, and should you want to report or seek services related to a case of human trafficking, you can contact the National Human Trafficking Hotline at 1-888-373-7888 or email [email protected].

But the Facebook posts about zip ties — like similar posts before it — are an example of an unsubstantiated warning.

Narcity, "Viral Social Media Posts About Human Trafficking In Canada Are Fake According To Police," Jan. 19, 2020