Facebook posts
stated on June 6, 2020 in a social media post:
California’s registered independent voters “will not be able to vote republican come 2020.”

A Facebook post that gained traction ahead of California’s presidential primary in March has new life, but spouts some of the same misleading information.

The post — reposted to Facebook June 6 — claims California’s registered independents must re-register with the GOP "to vote republican come 2020." It also alleges, without evidence, that the state came up with this requirement "hoping no one figures it out in time." 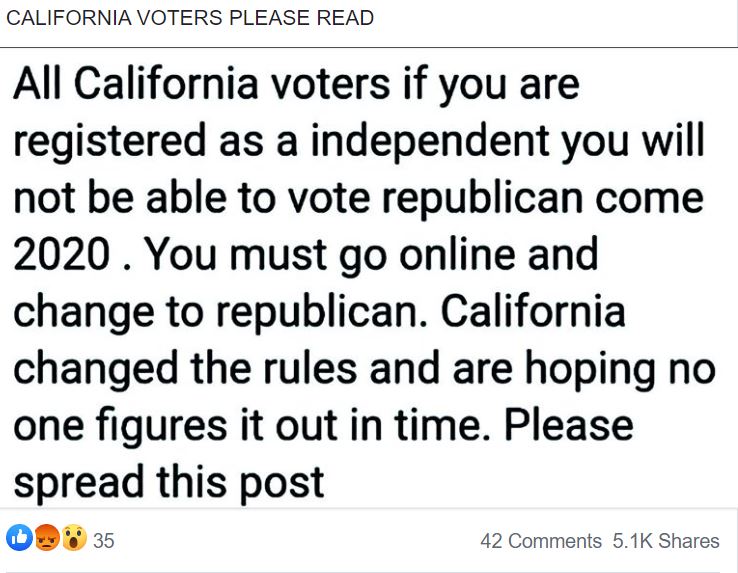 It was flagged as part of Facebook’s efforts to combat false news and misinformation on its News Feed. (Read more about PolitiFact California’s partnership with Facebook).

We fact-checked similar misinformation ahead of the primary. But with this post re-circulating, we decided to set the record straight, again.

According to the California Secretary of State’s Office, political parties — not state officials  — decide whether and how the state’s independent voters, also known as No Party Preference voters, can participate in each party’s presidential primary election.

The restrictions make it more difficult but not impossible to vote for your favorite candidate. For example, the Democratic party required California’s more than 5 million registered independents to request a "crossover ballot" in March to vote for a Democratic presidential candidate. But it did not force them to re-register.

By contrast, the Republican party required independent voters to register with the GOP to participate in its primary. So, the warning in the first part of the Facebook post was correct — for the March primary.

These requirements, however, do not apply to California’s November general election.

"The assertion in that Facebook post is absolutely not true," Sam Mahood, spokesperson for the California Secretary of State’s Office, wrote in an email this week. "In a General Election you can vote for any candidate, regardless of the voter’s party."

"All voters, regardless of the party preference they disclosed upon registration, or refusal to disclose a party preference, may vote for any candidate for a voter-nominated or nonpartisan office."

A resurfaced Facebook post claims California’s registered independents must re-register as Republicans to vote for GOP candidates "come 2020." It also alleges that California came up with this rule "hoping no one figures it out in time."

The first part was correct for the March primary. But it doesn’t apply to California’s November general election, when voters can select the candidate of their choice, no matter their party affiliation.

The second part is false. The political parties, not the state, set the rules for participating in presidential primaries.

This post was partially-wrong the first time. Now, the whole thing is wrong.