There’s A Lot Of Misinformation About California’s March Primary Election. Here Are The Facts.

California's No Party Preference voters must request a partisan ballot to vote for a presidential candidate.

Some on Twitter have falsely claimed that millions of voters won’t be able to choose their favorite presidential candidate because they’re registered as No Party Preference. Others have suggested that Vermont Sen. Bernie Sanders’ name was intentionally placed last among presidential candidates on the ballot, fueling mistrust over the election process.

Rick Hasen, a UC Irvine professor who specializes in election law, said social media has contributed to a rise in election misinformation nationwide.

"It’s just much easier for someone who has a mistaken idea to be able to put it out there and if the idea is popular enough or interesting enough, even if it’s false, it might get spread virally," said Hasen, noting the complexity of California’s election laws add to the confusion.

PolitiFact California examined several topics with the goal of knocking down election misinformation. But we want to do more. Is there a confusing or misleading claim about the election you want us to fact-check? If so, send us your request through our Ask PolitiFact California form below. We’ll consider it in future updates to this article.

Here's are the topics and claims we've looked into:
No Party Preference Voting Rules

Perhaps no other topic has led to more confusion than the rules for No Party Preference voters — and for good reason. More than 5 million Californians are registered as NPP, making it the second largest party behind Democrats and ahead of Republicans.

Here are the basics: If you’re registered as NPP and want to vote for a Democratic presidential candidate, you’ll need to request a Democratic Party ballot from your county elections office. If you want to vote for President Trump or any other Republican presidential candidate, you’ll need to re-register as a Republican because the GOP requires it.

To register to vote, re-register or check your registration status, visit registertovote.ca.gov. A complete guide for how to vote for president in the California primary is at HowToVoteForPresident.sos.ca.gov.

Every four years in California’s presidential primary, the political parties put these restrictions in place, making it more difficult but not impossible to vote for your favorite candidate. Voters in the general election can vote for any candidate no matter their party affiliation.

The rules have led to false claims about Californians being blocked from voting for their preferred candidates. They even inspired Vermont Sen. Bernie Sanders’ campaign to hold a press conference in Sacramento last week to explain how the process works.

In January, a researcher for the Pod Save America HBO TV show falsely claimed on Twitter that millions of Californians were being removed from the voter rolls and that you could not vote for a Democratic presidential candidate unless you are registered as a Democrat. The claim was retweeted by some influential accounts before the researcher deleted it and corrected the information. 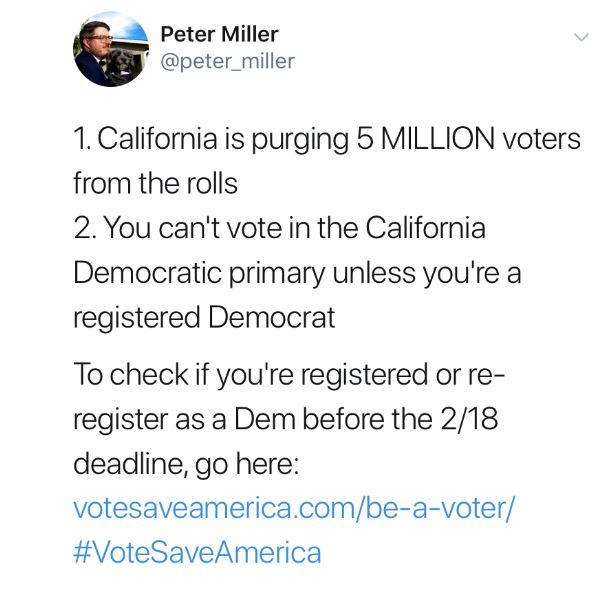 The uncertainty spiked early this year after county elections offices mailed postcards to No Party Preference voters asking them which party ballot they wanted. The cards had just three options: The Democratic Party, Libertarian Party and the American Independent Party. Again, the GOP refuses to give ballots to NPP voters in presidential primaries unless they re-register.

Last month, a reader registered as NPP emailed us a photo of her postcard and asked "Where is the option for Republican????!" She then claimed President Trump had been "kicked off" the ballot. That’s simply false.

The 5.3 million Californians registered as No Party Preference represent 26 percent of the state’s total, according to a report released this month by the Secretary of State’s Office. Democrats top the list at 9.1 million and 44.6 percent, while Republicans are third with 4.8 million registered voters or 23.7 percent.

Vermont Sen. Bernie Sanders has enthusiastic support in California. But one of his backers recently spread misleading information across social media. She suggested in a video on Twitter that Sanders’ name was intentionally placed near the bottom of the candidate list on the California ballot. That false claim was retweeted more than 1,000 times, according to a Sacramento Bee fact check.

The Secretary of State’s office responded to the video with its own tweet:

There are 80 assembly districts across the state, each with populations of about 465,000.

In the video, the Sanders backer said "the establishment is going to do everything it can to stop Bernie Sanders." She corrected her comments in follow-up tweets. By that time, however, the video had caused Sanders supporters to respond on Twitter that party leaders were rigging the election by discouraging people from voting for him.

The reality is voters across California will see Sanders’ name sometimes near the top of the ballot, including in Sacramento region’s 7th Assembly District. In other regions his name might be near the middle, or in Solano County — where the ballot from the concerned Sanders supporter was received — it will appear second from the bottom.

If you did a double-take when you saw the name on March’s only statewide ballot measure, you’re not alone. It’s called Proposition 13. But, no, it’s not connected to the historic property tax initiative from the 1970s with the same name. The number 13 has simply cycled through again.

That’s despite a failed effort to ‘retire’ the number and prevent it from being used with any future propositions.

This year’s Proposition 13 would help pay for repairs and upgrades to K-12 schools, community colleges and public universities. CapRadio took a close look at arguments for and against the measure here.

Earlier this year, posts shared thousands of times on Facebook falsely claimed California "is putting together plans" to eliminate the historic Prop. 13.

The reality? There is an effort to qualify a November ballot measure to undo some of Prop. 13’s tax protections. This so-called "split-roll" measure would remove protections for commercial and industrial properties with a value over $3 million. It would be a major change to the law.

But homeowners, small businesses and agricultural properties would not lose their Prop. 13 tax safeguards. That’s spelled out in the measure’s official state title and summary document.

In the end, the Facebook posts captured the real concern about possible changes to Prop. 13, but they also greatly misrepresented what the November measure would do. We rated their claims False.

Knocking Down The Myth That Provisional Ballots Don’t Get Counted

There’s a persistent myth that California doesn’t count the provisional ballots placed in special pink envelopes. Those ballots are handed out at polling places to voters whose names don’t appear on voting rosters, as a fail-safe in case there’s a clerical or computer error that keeps a person’s name off the list.

But based on recent reporting by the Secretary of State’s Office, that myth doesn’t stand up to the facts. In the November 2018 midterm, 91.7 percent of the nearly 1 million provisional ballots cast were counted toward the final tally after election officials processed them to ensure they were valid, the office reported in a news release last year.

"All provisional ballots are carefully checked by county elections officials to confirm that the person who voted provisionally is both registered and that they did not cast a ballot by mail or at another polling location on Election Day," the office said.

Trump has repeatedly, and without evidence, claimed "serious voter fraud" took place in California during the 2016 presidential election. The allegations, which Trump resurfaced on Meet the Press last June, have been widely debunked by elections officials, fact-checking organizations including PolitiFact and PolitiFact California, and other media outlets. We have three times rated Trump’s claim on the topic Pants on Fire.

Elections officials and nonpartisan observers in California said after the 2016 election there were no widespread reports of voter fraud. The state has some of the most stringent voter verification laws in the country.

"No matter how much he repeats them, Trump's lies about voter fraud are patently untrue," California Secretary of State Alex Padilla said of Trump’s claim last June, describing it as "yet another distortion aimed at undermining confidence in our elections."

If you spot election information that needs a fact check, send us a request through our Ask PolitiFact California form. We’ll consider it in future updates.

California Secretary of State website, How to Vote for U.S. President, accessed February 2020