Facebook posts
stated on November 27, 2021 in a Facebook post:
"Don’t be fooled by the next ‘Variant’! There are actually 1000’s of them. They just will pick the next one to keep the fear going."

Social media users are sharing a misleading post that claims public health agencies have thousands of fake COVID-19 variants lined up and are revealing them one by one to stoke fear.

The Facebook post is the latest version of the conspiracy theories about the coronavirus being planned, or faked, or a hoax. It follows similar internet rumors that claimed, also falsely, that the name of the new omicron variant is evidence that the pandemic is a hoax, and that the variant was timed to distract from the sex trafficking trial of Ghislaine Maxwell. 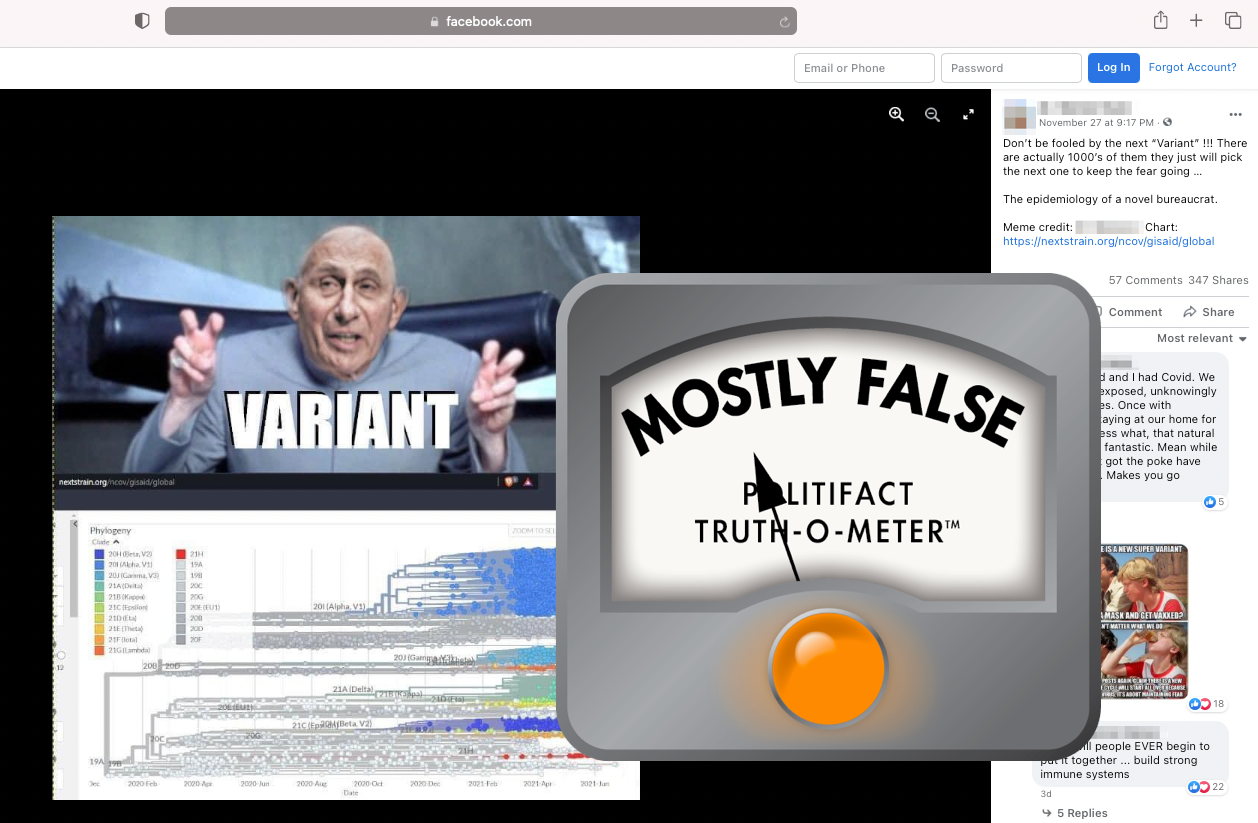 A Nov. 27 Facebook post wrongly suggested that the COVID-19 variants are fake and systematically revealed to stoke fear.

The post includes an altered image that shows the face of the White House chief medical adviser Dr. Anthony Fauci on the body of Dr. Evil, the villain in the "Austin Powers" movie franchise, whom the post depicts as making an air-quotes gesture with his hands around the word "variant."

The post also shows a screenshot of a visualization from Nextstrain, an open-source bioinformatics project run by a team of researchers.

But in a statement to PolitiFact, Nextstrain said the post is an example of its charts being distorted by "a few people who want to interpret them to further their misinformation claims."

The post makes it sound like public health officials are sitting on a long list of fake variants and announcing new ones every time fears about the others subside. That’s not the case.

There are thousands of COVID-19 variants in existence, as is to be expected with any virus that mutates. But that doesn’t mean omicron and the other named variants that public health agencies have sounded alarms about are fake or planned. The variants that get elevated in this way are not selected at random or "to keep the fear going," experts said.

Why we only hear about some variants

Viruses, including the one that causes COVID-19, can evolve over time.

A variant of the coronavirus is one that differs from the original strain that emerged in Wuhan, China. The changes arise via random mutations, especially when circulating at high rates.

The chart featured in the Facebook post "plots the data we have on SARS-CoV-2 genetic code sequences over time," Nextstrain said in its statement. "It's a little like a virus family tree."

But while there are thousands of coronavirus variants, most fade out over time or never become widespread strains, so they are not concerning in the context of the pandemic.

"New variants of the SARS-CoV-2 virus are detected every week," Johns Hopkins Medicine’s Dr. Stuart Ray added in an article on the university’s website. "Most come and go."

Public health agencies like the Centers for Disease Control and Prevention and the World Health Organization monitor mutations and watch for changes that could make evolving strains more transmissible, dangerous, or resistant to testing, vaccines and treatments.

These are the variants scientists warn about — like the delta variant, which has for months accounted for more than 99% of all coronavirus infections in the U.S. The WHO currently lists five variants of concern: alpha, beta, delta, gamma and omicron.

"The reason that we only hear about a few of the variants is because they are not all of equal importance," said Cindy Prins, a clinical associate professor of epidemiology at the University of Florida. The ones we hear about on the news "are the ones that have the potential to have a greater effect on public health."

Despite the Facebook post’s claims, the variants are not rolled out at random or to "keep the fear going."

Instead, they are designated as variants of interest or concern according to public health agencies’ working definitions and a process that is "scientific, well thought-out, and designed to focus only on those that need to be prioritized," Prins said. Omicron is only the 13th variant to receive a Greek alphabet name under the WHO’s classification system.

"They are very much not picked at random," Nextstrain said in its statement.

A Facebook post said, "Don’t be fooled by the next ‘Variant’! There are actually 1000’s of them. They just will pick the next one to keep the fear going."

There are thousands of coronavirus variants, but they are not fake, or planned, or being systematically revealed to "keep the fear going," as the post suggests.

The handful of variants that have been named variants of interest or concern were classified as such because they met criteria that gave public health agencies reason to raise alarms.

U.S. Centers for Disease Control and Prevention, "What You Need to Know about Variants," Nov. 27, 2021

Johns Hopkins University, "COVID Variants: What You Should Know," Oct. 5, 2021

PolitiFact, "The new coronavirus variant is named for a letter in the Greek alphabet," Nov. 30, 2021

PolitiFact, "Omicron and other coronavirus variants: What you need to know," Nov. 29, 2021

Email interview with Cindy Prins, clinical associate professor of epidemiology and assistant dean for educational affairs at the University of Florida, Nov. 30, 2021