Alma Adams
stated on July 14, 2021 in a committee meeting:
"Lumber prices can be tied to the (Trump) administration’s actions."

A North Carolina congresswoman says former President Donald Trump is partly to blame for an increase in lumber prices.

Adams wanted to know why Powell believes the recent inflation trends are temporary. And while winding up for her question, she said a rise in lumber prices "can be tied to the previous administration’s actions."

"My local housing partnership had to pause construction of an affordable housing site because of a funding gap caused by the spike in lumber prices. And while lumber prices can be tied to the previous administration’s actions, I know that many are still concerned about the rise in core prices."

"So I’m hoping you can help us put some of these concerns to bed. So would you tell us why you believe the recent inflation trends are temporary as the economy reopens and what other factors are playing into the upward pressure on prices?"

Later that day, a Twitter user challenged Adams’ explanation. She responded by elaborating on her comments in a tweet.

"The Trump Administration's high tariffs on Canadian lumber drove prices higher. Supply chain disruptions due to the pandemic compounded the problem and drove prices even higher," she tweeted on July 14. 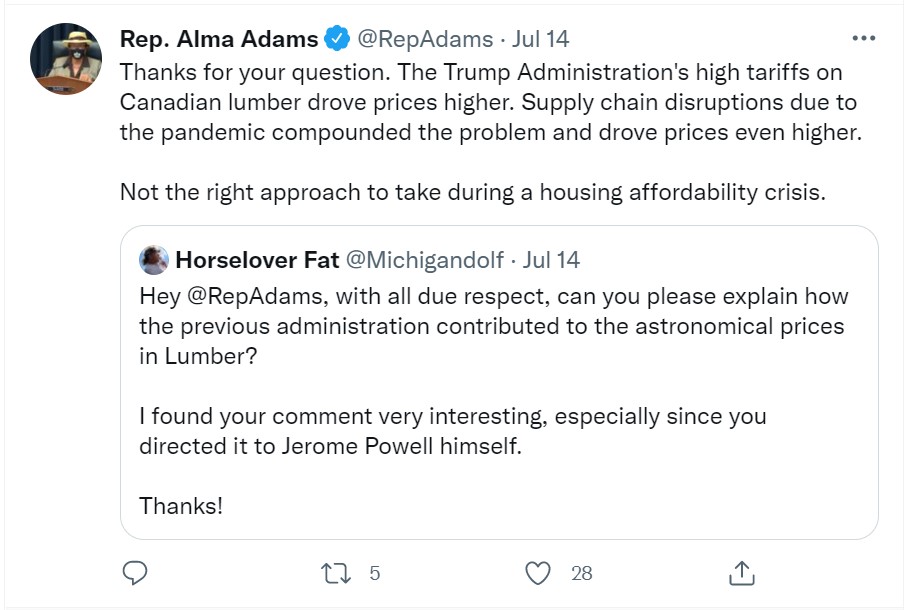 Is she right about that?

Trump did place a tariff on Canadian lumber and it’s fair for Adams to point out that it caused lumber prices to rise, experts told us. However, experts say lumber prices are more complicated than her statement suggests.

There are a number of reasons why the recent rise in lumber prices isn’t entirely — or even primarily a result of — Trump’s tariffs.

When prices started to rise

By the time Trump imposed tariffs on lumber in 2017, prices were already on the rise because of uncertainty surrounding an expired trade agreement. The U.S. and Canada had a 10-year trade pact that expired at the end of 2016.

David Logan, director of tax and trade analysis for the National Association of Home Builders, wrote in March 2017 that "failure to reach a new (trade) agreement is the primary catalyst of market-wide price increases."

A month later, the Trump administration announced tariffs of 20% on Canadian lumber and up to 24% on specific lumber companies.

Lumber prices have a history of being volatile, experts told PolitiFact. They can range from $300 to $600 per thousand board feet when in stable economic times.

It’s fair to say Trump’s tariffs contributed to that rise, experts told PolitiFact. Other factors played a role too. Lumber market expert Paul F. Jannke, a principal at Forest Economic Advisors, told the New York Times that a reduction in the supply of Canadian lumber also contributed to the rise in prices.

Fast forward to 2020. When the pandemic takes hold, some saw mills shut down or cut production as they anticipate decreased demand. But their predictions were wrong.

More Americans started to work from home and decided to undertake home renovation projects. Demand for lumber rises and prices reach $950 per thousand board feet in September, according to the NAHB.

In the meantime, the World Trade Organization ruled in August that the Trump administration’s justification for the 2017 lumber tariff was off-base. And late last year, the U.S. Commerce Department slashed the softwood lumber tariff to 9%.

Last year’s rise in prices was just the start. Lumber prices hit an all-time high of $1,670 per thousand board feet this May as demand rose for a limited supply, CNBC reported.

The lumber industry’s struggle to keep up with demand has been well-documented in American media, from Vox and CNN to Fortune and Bloomberg. Experts told PolitiFact there are many factors that determine the price of lumber. Trump’s tariff is one of those factors but isn’t the leading cause of the spike.

The price increases "can be traced back to mill closures and a massive reduction of output upon reopening based on the incorrect assumption that the housing market would indefinitely tank," Logan, the NAHB expert, told PolitiFact in April.

Sam Spencer, a spokesperson for Adams, said the Congresswoman’s tweet accurately summarized the effect of tariffs.

"The price of lumber can be tied to the tariffs: if there is a supply crunch, the fact that we’re artificially elevating the price of that specific commodity’s importation by default contributes to the rise in prices," Spencer said in an email.

While the tariffs certainly helped cause lumber prices to jump in 2018, "that second round increase isn’t related to the Trump tariff," said Vincent Smith, an expert in agricultural policy at the American Enterprise Institute. "That was a demand side driven surge."

Adams is "not wrong about the impact of the Trump tariffs in 2017," Smith said, adding: "that doesn’t explain the surge in prices subsequently."

The softwood lumber tariff "doesn't help," said Thomas A. Firey, a senior fellow at the Cato Institute and managing editor of its Regulation Magazine.

"However, the tariff is set and adjusted by statute, and it's unfair for the congresswoman to blame Trump for initiating it (or Biden, whose administration is obligated to raise it)," Firey told PolitiFact in an email.

Scott Lincicome, a senior fellow in economic studies at the Cato Institute, says the fluctuating cost of lumber in the U.S. is a result of a trade system that’s overdue for reform. The regulations affecting how much lumber is made available, who’s allowed to produce it, and how it’s taxed -- are designed to benefit the American lumber industry, sometimes at the expense of the consumer. The system’s drawbacks are exacerbated during seasons of high demand.

"It's factually true that the Trump administration’s Commerce Department applied the tariffs, but beyond that casting the blame is pretty nonsensical," Lincicome said.

Experts pointed out too that Biden was in office as lumber prices peaked, and hasn’t acted to reduce the tariffs. The Commerce Department is now proposing to double the lumber tariff to 18%. CNN and Fortune Magazine report that Biden, for his part, has yet to take a stance on the proposal.

Adams, referencing Trump’s time as president, said "lumber prices can be tied to the previous administration’s actions." She later tweeted an assertion that Trump’s tariffs were a cause.

Trump increased the tariff on Canadian lumber in 2017 and prices rose in the following year. However, prices skyrocketed even higher in the last year as a result of pandemic-era market changes. Economists say that’s largely the result of unforeseen issues of supply and demand.

Adams’ statement is partially accurate but leaves out important details or takes things out of context. We rate it Half True.

Video on YouTube, Fed Chair Powell testifies on 'Monetary Policy and the States of the Economy’," posted July 14, 2021.

Story by Forbes, Why lumber and plywood prices are so high—and when they will come down," posted May 22, 2021.

Telephone interview with Vincent Smith, an expert in agricultural policy at the American Enterprise Institute.

Telephone interview with Scott Lincicome, a senior fellow in economic studies at the Cato Institute.

Email exchange with Thomas A. Firey, a senior fellow at the Cato Institute and managing editor of its Regulation Magazine.