Viral image
stated on May 29, 2021 in a Facebook post:
Photo shows “the plane that brings our dead military home. It is made so that when they shoot their salute for their service it looks like an angel carrying them home.”

An image of what looks like a plane shooting flares mid-flight so that it appears adorned with angel’s wings is again being shared on social media with old misinformation.

"This is the plane that brings our dead military home," one Facebook post says. "It is made so that when they shoot their salute for their service it looks like an angel carrying them home. Their call sign is angel flight and they have priority in US air space."

But this is wrong. 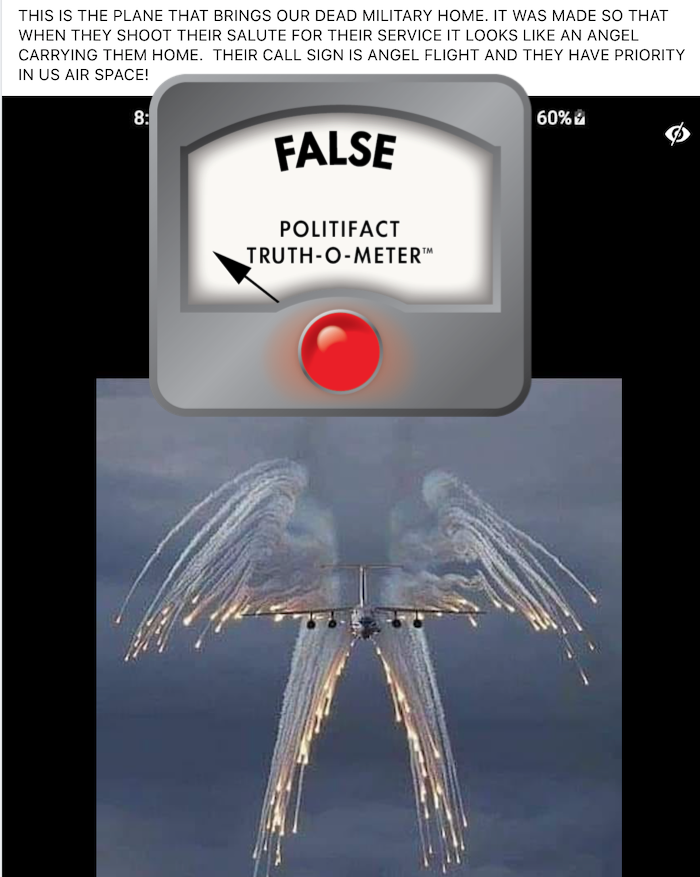 (Screenshot from Facebook)
We reached out to the U.S. Defense Department about the post. A public affairs duty officer told PolitiFact that flares aren't used on U.S. military aircraft to return fallen service members.
"They are only used for defensive maneuvers," the officer said in an email. And "Angel Flight" isn’t an official military term.
Fallen military members are returned from overseas to Dover Air Force Base in Delaware "by the most expedient means possible," according to Air Force Mortuary Affairs Operations.
In 2010, the Wall Street Journal reported that employees of the Air Force’s Air Mobility Command "function as the nation’s pallbearers, ferrying flag-draped remains" to the base. The Pentagon employs four companies, including UPS and Federal Express, to help bring bodies back to Dover, the newspaper said. Some of the dead are flown back on civilian planes while others are returned via military aircraft.
We couldn’t identify the plane in the Facebook post, but the claim isn’t a new one. Snopes looked into a similar post back in 2017. Then, the fact-checking site reported that it appears to be a Russian Ilyushin Il-76.
We rate this post False.

Email interview with the Office of the Secretary of Defense public affairs duty officer, June 7, 2021

Viral image
stated on June 15, 2021 a Facebook post:
Photo shows a semi-truck that crashed with a Chevy pickup that cut in front of it.

Viral image
stated on June 14, 2021 a Facebook post:
The FBI building in Washington is “completely closed. No one’s in there.”