2014 Lie of the Year: Exaggerations about Ebola

Eight days after that, he was dead.

Duncan’s case is just one of two Ebola-related fatalities in the United States, and since Duncan traveled to Dallas, more Americans -- at least nine, and likely many more -- have died from the flu.

Yet fear of the disease stretched to every corner of America this fall, stoked by exaggerated claims from politicians and pundits. They said Ebola was easy to catch, that illegal immigrants may be carrying the virus across the southern border, that it was all part of a government or corporate conspiracy.

The claims -- all wrong -- distorted the debate about a serious public health issue. Together, they earn our Lie of the Year for 2014.

PolitiFact editors choose the Lie of the Year, in part, based on how broadly a myth or falsehood infiltrates conventional thinking. In 2013, it was the promise made by President Barack Obama and other Democrats that "If you like your health care plan, you can keep it." While no singular line about Ebola matched last year’s empty rhetoric about health care, the statements together produced a dangerous and incorrect narrative.

PolitiFact and PunditFact rated 16 separate claims about Ebola as Mostly False, False or Pants on Fire on our Truth-O-Meter in 2014. Ten of those claims came in October, as Duncan’s case came to the fore and as voters went to the polls to select a new Congress.

Fox News analyst George Will claimed Ebola could be spread into the general population through a sneeze or a cough, saying the conventional wisdom that Ebola spreads only through direct contact with bodily fluids was wrong.

"The problem is the original assumption, said with great certitude if not certainty, was that you need to have direct contact, meaning with bodily fluids from someone, because it’s not airborne," Will said. "There are doctors who are saying that in a sneeze or some cough, some of the airborne particles can be infectious." False.

Internet conspirators claimed President Obama intended to detain people who had signs of illness. Pants on Fire. Bloggers also said the outbreak was started in a bioweapons lab funded by George Soros and Bill Gates. Pants on Fire.

A Georgia congressman claimed there were reports of people carrying diseases including Ebola across the southern border. Pants on Fire. Sen. John McCain, R-Ariz., said Americans were told the country would be Ebola-free. False.

When combined, the claims edged the nation toward panic. Governors fought Washington over the federal response. The Centers for Disease Control and Prevention stumbled to explain details about transmission of the virus and its own prevention measures. American universities turned away people from Africa, whether they were near the outbreak or not.

"Americans spent March through July thinking that the outbreak was no threat at all, then from August to October, it was the apocalypse," said Stephen Gire, a researcher who has been to West Africa and is studying the Ebola genome at the Broad Institute of MIT and Harvard. "And now in December, a year after the first case of Ebola infected a young Guinean, Americans are complaining that it was all ‘overhyped.’

"During this whole year, people in West Africa have been dying of Ebola at an increasing rate. We as Americans are so far removed from the reality of what is really going on."

From Liberia to Dallas, the facts

Duncan died at Texas Health Presbyterian Hospital on Oct. 8, but that single event was months in the making.

Health workers identified Ebola in March in the West African country of Guinea and later in Sierra Leone and Liberia. The virus didn’t garner much attention from the United States at first. But by June, the international medical group Doctors Without Borders warned that efforts to contain the disease were failing.

Their homecomings played out in front of a national television audience. News helicopters followed Dr. Kent Brantly’s ambulance on a half-hour ride through Atlanta, and watched as Brantly emerged in a protective suit, leaning on the arm of another health care worker. 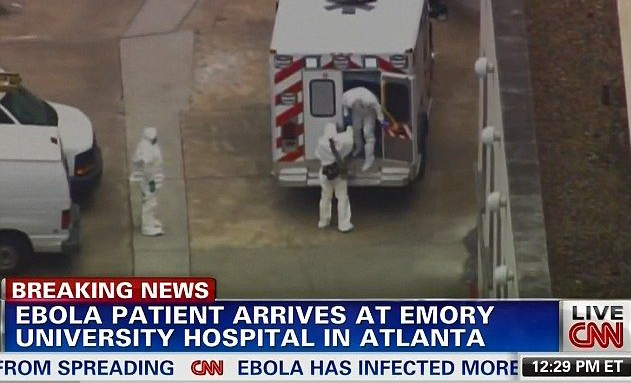 Brantly’s arrival, followed days later by Nancy Writebol, set off a frenzy of commentary, reaction, and eventually, misinformation. Websites like Infowars.com made an erroneous connection between their arrival and an executive order that the website claimed "mandates the apprehension and detention of Americans who merely show signs of 'respiratory illness.' " (Pants on Fire.)

Personalities such as Donald Trump called for stopping all flights from countries where Ebola cases had been found. Governors in New York and New Jersey moved to strictly quarantine health care workers even if they showed no symptoms, procedures that were later relaxed. 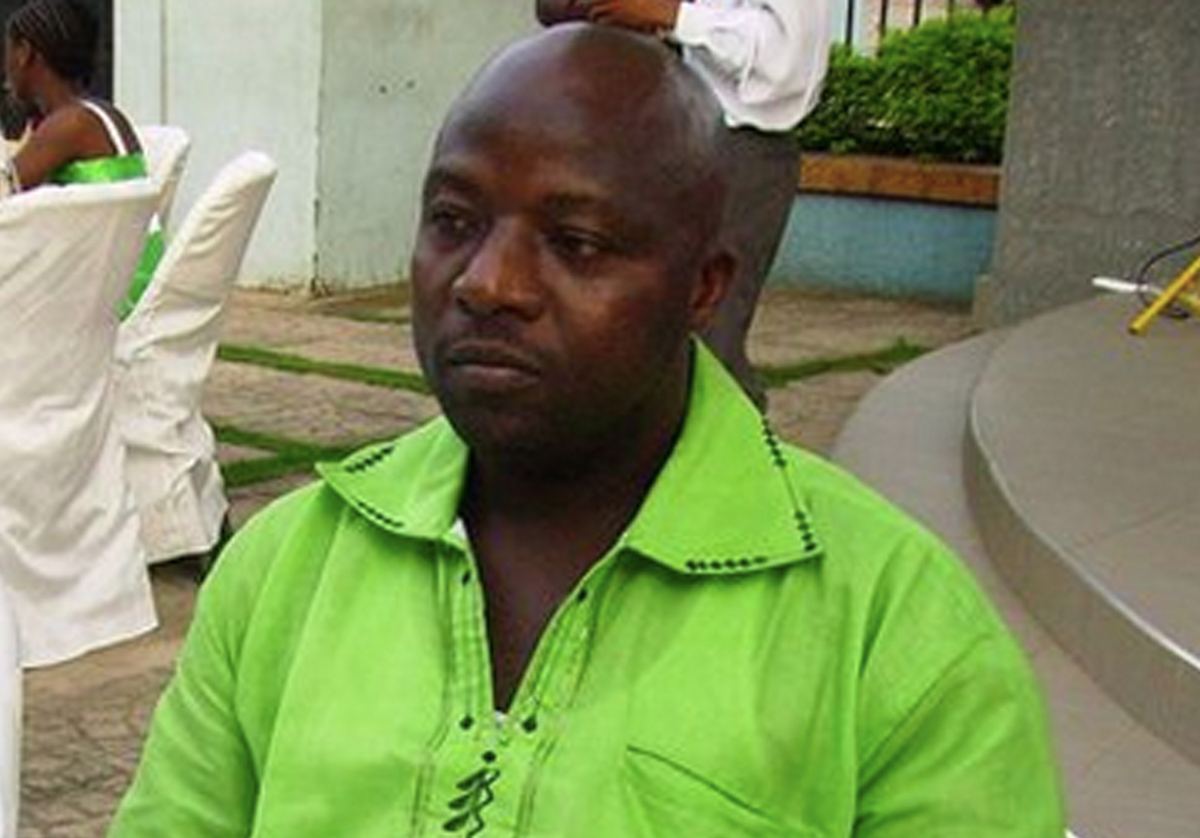 Duncan (pictured at right) was the first person to die of Ebola in the United States. A Liberian who traveled to visit relatives in the United States, Duncan flew out of Monrovia, connecting through Belgium and Dulles International Airport in Washington before heading to Dallas. Duncan went to the Dallas hospital Sept. 25 complaining of abdominal pain, dizziness, nausea and headaches. Health care workers sent him home, but he returned Sept. 28 via ambulance. He was seriously ill.

In the days after Duncan’s death, two nurses who cared for him -- Nina Pham and Amber Vinson -- contracted the virus but recovered. That scare forced the CDC to change protocols for health care workers. Before, the CDC recommended gowns, gloves and face masks, which allowed some skin, such as the neck, to be exposed. The new guidelines aimed for no skin exposure and called for use of a respirator.

The other fatality occurred Nov. 17, when a Sierra Leone doctor with Ebola died after a two-day stay at a Nebraska hospital.

The twists and turns of the story created a vacuum of reliable information.

Will’s claim that Ebola could spread through the air via a cough or sneeze shows how solid science got misconstrued. The conservative commentator suggested a thought shift about how the virus could spread. In reality, Will simply misunderstood scientists’ consistent, albeit technical explanation.

Ebola spreads through direct contact with bodily fluids such as blood, vomit and diarrhea. Coughing and sneezing are not symptoms.

Airborne viruses, meanwhile, have the ability to travel large distances propelled by a sneeze or cough. In those cases, people breathe in virus particles without even realizing it. Scientists say there is no evidence Ebola works like that.

But what is theoretically possible, and what Will failed to explain properly, is that a person with Ebola could sneeze or cough directly onto someone (likely their eyes, nose or mouth) and transmit the disease through the fluid they pass.

It’s the difference between someone coughing on an airplane one row behind you and the person in the seat next to you sneezing directly into your face, epidemiologists say.

"The whole basis of science tells us to question and keep an open mind to new possibilities, and so when a reporter asks a scientist something like, ‘Will Ebola become airborne?’, even though the scientist knows that this is biologically impossible for many reasons, the scientist can’t exactly say that without all the proper data to make that conclusion," Gire said.

"And so they often will say things like, ‘Well it’s unlikely but could be possible,’ " Gire said.  "While that response is in light of the scientific method, the media just highlights ‘it’s possible.’ " 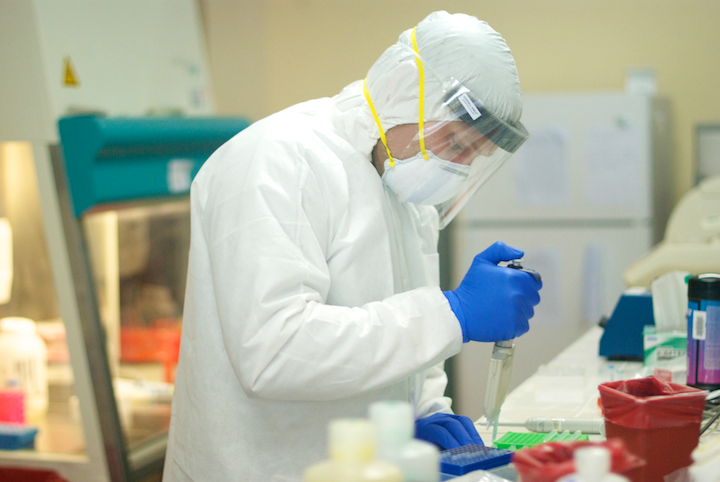 While some claims missed on the science, others were pure politics. Sen. Mark Pryor, D-Ark., argued that his opponent Tom Cotton "voted against preparing America for pandemics like Ebola." Cotton voted against one version of a 2013 bill that funded overall pandemic and emergency preparedness. But Cotton ended up voting for the final version, and the bill easily became law. The claim by Pryor, who lost re-election, rated Mostly False.

The panicked warnings that flared up in October all but disappeared a month later.

Over the course of November, Ebola mentions on CNN, Fox News and MSNBC dropped 82 percent, according to a review of closed caption transcripts. Mentions on the three cable networks dipped another 35 percent in the first week of December. 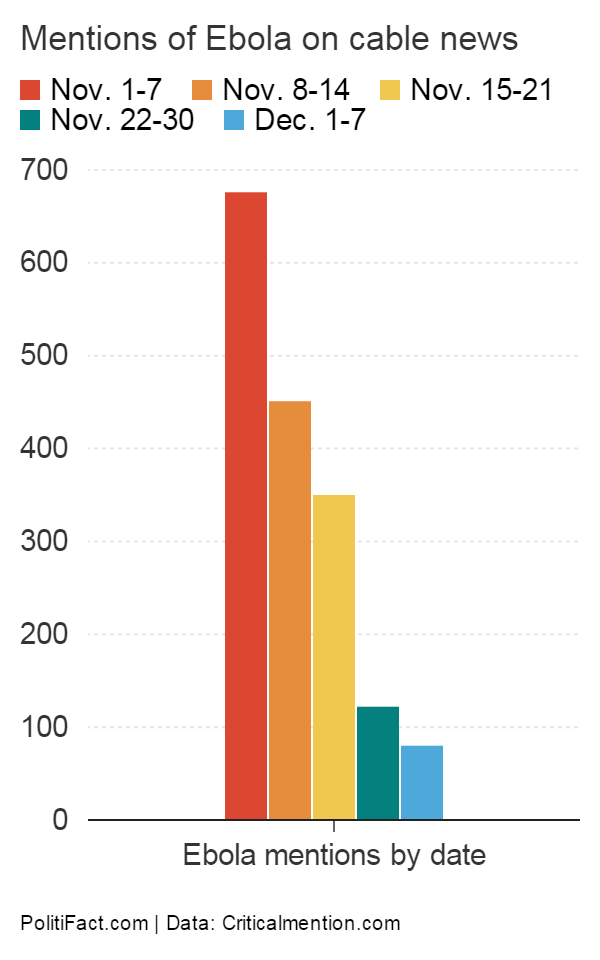 At the same time, at least 3,578 more people contracted Ebola, according to the World Health Organization, and another 1,119 people died. Overall, the death toll has crept near 6,400.

"Look where we are now, do we hear much about the epidemic in Africa any more? Do we hear about the effective measures that hospitals have put in place? The list goes on and on," said Adam Lauring, assistant professor at the University of Michigan Medical School’s division of infectious diseases. "Perhaps some of it is the 24-hour news cycle, the Twitter-verse, etc. Perhaps some of it has to do with the fact that this all hit right before the election and it was easy to politicize."

Ebola’s particular narrative helped breathe life into the fear, says Jack Z. Bratich, chair of the Department of Journalism & Media Studies at Rutgers University and author of the book Conspiracy Panics. The recipe: A mix of a far-off continent, immigration fears, terrorism concerns and the best scripts Hollywood could deliver.

Members of Congress even came up with their own scenarios, with some suggesting that Ebola could be a security threat to the United States carried in by illegal immigrants or terrorists. But such ideas contradicted basic facts about the disease.

With an incubation period of 21 days, immigrants would have to get infected in Africa, fly to Mexico, travel to the border and hope to make it across before they died themselves. Terrorists would face similar travel challenges, as well as difficulties with attempts to intentionally infect other people. Ebola is spread through bodily fluids and isn’t nearly as contagious as the flu or measles.

In early October, Fox News posted a list of the top nine scariest pandemic movies. At the top was the 1995 film Outbreak, in which a virus mutates, becomes airborne and forces the Army to consider dropping a nuclear weapon on a sleepy California town.

"Whether it's rabid zombies, Ebola-like viruses or both, outbreak films are beginning to feel a bit too real nowadays," Fox wrote.

As for the virus itself?

Experts we spoke to said there remains a possibility that isolated Ebola cases could occur in the United States. More likely is that U.S. medical facilities will treat U.S. Ebola health workers returning from West Africa.

Last week, an American nurse working in Sierra Leone was admitted to the NIH Clinical Center in Maryland after being exposed to the virus.

View the results of the 2014 Readers' Poll

A look back at PolitiFact’s Lie of the Year

Read all our fact-checks about Ebola

Questions and answers about Lie of the Year

PunditFact editor Aaron Sharockman discusses the Lie of the Year

Washington Post, Out of control: How the world’s health organizations failed to stop the Ebola disaster, Oct. 4, 2014

National Geographic, Every Newly Emerging Disease Like Ebola Begins With a Mystery, Oct. 5, 2014

Washington Post, I’m the head nurse at Emory. This is why we wanted to bring the Ebola patients to the U.S., Aug. 6, 2014

U.S. House of Representatives, Committee on Oversight and Government Reform, The Ebola Crisis: Coordination of a Multi-Agency Response, Oct. 14, 2014