Four years ago, Barack Obama made an extraordinary array of campaign promises -- 508 pledges on everything from taxing the rich to ending the Iraq war.

He vowed to get health coverage for the uninsured and to safeguard the environment by capping carbon emissions. He pledged to push for comprehensive immigration reform and help homeowners after the housing market crashed.

Above all, he would change the tenor of the debate in Washington.

"We have a chance to bring the country together in a new majority — to finally tackle problems that Washington has ignored for too long. And that is why the same old Washington textbook campaigns just won’t do in this election," he said in Blueprint for Change, a campaign document that became his presidential to-do list.

PolitiFact has been tracking all 508 promises and keeping tally on the Obameter throughout his presidency.

Our scorecard shows Obama kept 37 percent of his promises. He brought the war in Iraq to a close and finally achieved the Democratic dream of a universal health care program. When the United States had Osama bin Laden in its sights, Obama issued the order to kill.

Sixteen percent are rated Broken, often because they hit a brick wall in Congress. Global warming legislation passed the House but died in the Senate. He didn't even push for comprehensive immigration reform. His program to help homeowners facing foreclosure didn’t even meet its own benchmarks. (PolitiFact rates campaign promises based on outcomes, not intentions.)

One stands out as not only his biggest broken promise, but as an explanation for many others that have fizzled or failed: his pledge to bring people together for a bipartisan agenda.

"That, it seems to me, is the most important promise that the president has not been able to keep," said William Galston, a former Clinton administration aide who now is a fellow at the Brookings Institution and studies political polarization. "It will long be debated by historians whether he tried and failed, or didn’t really try at all."

This is an accounting of the promises Obama kept and failed to keep, and how bipartisanship eluded him at nearly every turn.

In the beginning: the stimulus

When Obama and the Democrats muscled the economic stimulus through Congress in the second month of his presidency, it contained a grab-bag of his promises -- tax credits for buyers of hybrid cars, Pell grants for low-income college students, and federal dollars for solar, wind and biofuel.

It included Race to the Top, an education grant contest among the states to encourage new testing standards, rewards for good teachers and more emphasis on math and science.

When Obama signed the stimulus into law on Feb. 17, 2009, he  said it contained the ideas of both Democrats and Republicans, and it did include a hefty portion of taxcuts.

But the stimulus ended up passing with only three Republican votes in the Senate, and none in the U.S. House of Representatives. The recriminations started.

Republicans blamed Democrats for excluding them from negotiations, said Brian Darling, a senior fellow who studies government at the conservative Heritage Foundation.

"It started out on a bad note," Darling said. "That’s when the well was poisoned, very early, during the stimulus debate."

As time went by, Democrats saw the Republican opposition as a purely political tactic: If the stimulus worked, Obama would get credit. If it didn’t work, Republicans would be able to throw their opposition back in Obama’s face during the next election cycle.

Planned or not, Republicans coalesced into a vocal, unified opposition.

"That became their strategy for the first two years of the Obama administration," noted Jonathan Alter in his book The Promise, a chronicle of Obama’s first year in office.

Republicans in Congress weren’t Obama’s only opponents. Days after signing the stimulus, CNBC’s Rick Santelli gave a commentary on the floor of the Chicago mercantile, slamming Obama’s plans to help people facing foreclosures and underwater mortgages.

"How many of you people want to pay for your neighbor’s mortgage that has an extra bathroom and can’t pay their bills? Raise your hand!" shouted Santelli. The traders surrounding him gave lusty boos.

"President Obama, are you liiiiistening?" he said.

Santelli said he was organizing an event to protest, and he called it a tea party.

Health care and other achievements

When Obama turned to health care, he got a sobering lesson in the ways of Washington.

In the Senate, negotiations started in April 2009 and then dragged on for months, sucking energy and time from his other initiatives. Meanwhile, the White House sacrificed promises on transparency and prescription drugs as it cut deals behind closed doors.

In exchange for concessions from prescription drug makers, Obama abandoned promises to allow imported prescription drugs from Canada, to give Medicare the power to negotiate for cheaper prescription drugs, and to prevent drug companies from blocking generic drugs. And the negotiations did not take place on C-SPAN, as Obama said during the campaign. PolitiFact rated all four pledges Promise Broken.

But again, the health law proved incredibly divisive. Republicans called it a government takeover of health care and worse, and the partisan lines hardened.

What didn’t get done

His success on health care came at a price. He ran out of political capital to spend on other promises.

A cap-and-trade bill to address climate change passed the House, but didn’t get a hearing in the Senate. Promises to help labor unions languished. And the administration largely ignored comprehensive immigration legislation, not even pushing to introduce the bill.

"Did Obama say he wanted to pass immigration reform? Yes, often. Did he make it a priority? No," said Frank Sharry, executive director of the pro-immigration group America’s Voice.

And Democrats were still coming to grips with the unity and intensity of Republican opposition, Sharry said, and not just on immigration, but on the stimulus and health care.

Democrats had expected Republicans to be chastened after the 2008 elections and willing to compromise. But compromise never happened.

"The way the Republicans organized to say no to everything, the way they did it so ruthlessly and effectively, it was just mind boggling," he said.

The elections of November 2010 brought Republicans back to power in the House, with strong support from the tea party movement.

After the elections, Obama managed to hammer out a rare compromise with Republicans and Democrats. They agreed to postpone the expiration of a series of tax cuts passed under President George W. Bush that were due to expire at the end of 2010.

Even as Obama won the moment of compromise, he compared his negotiating partners with hostage takers.

"I think it’s tempting not to negotiate with hostage-takers, unless the hostage gets harmed," Obama said. "In this case, the hostage was the American people and I was not willing to see them get harmed."

When the new Congress convened in 2011, almost everything on Obama’s wish list that required legislative approval came to a grinding halt.

In addition to domestic policy, Congress kept the brakes on some of Obama’s foreign policy initiatives. Most notably, Guantanamo Bay -- the detention center for terrorism suspects that Obama wanted closed -- stayed open. We rated Obama’s pledge to close it Promise Broken.

And prospects for bipartisan compromise were raised and then dashed during the battle over the debt ceiling.

Republicans wanted spending cuts in return for what in years past had been a largely symbolic vote. Budget negotiations continued right up the last minute, finally coming to a conclusion on Aug. 2, 2011, when the two sides formally agreed to punt budget cuts to a super-committee.

In the meantime, the U.S. received a historic downgrading of its credit from the agency Standard & Poor’s. Then the super-committee failed, too. Looming for 2013: automatic, across-the-board spending cuts (called sequestration) that neither side really wanted in the first place.

As the elections have approached, Congress has turned away from law-making and toward campaigning. Obama no longer speaks of bringing Democrats and Republicans together to pass an agenda. PolitiFact rated that Promise Broken.

Back in 2004, Obama famously said, "There's not a liberal America and a conservative America; there's the United States of America."

In a 2012 campaign ad, Obama sits alone in a room. He looks directly at the camera and goes through his overarching policy ideas. He wants to raise taxes on the wealthy to pay for investments in education, energy and manufacturing, just as he promised in 2008.

This time, there’s no talk of bipartisanship.

"It’s a choice," he says, "between two very different plans for our country." 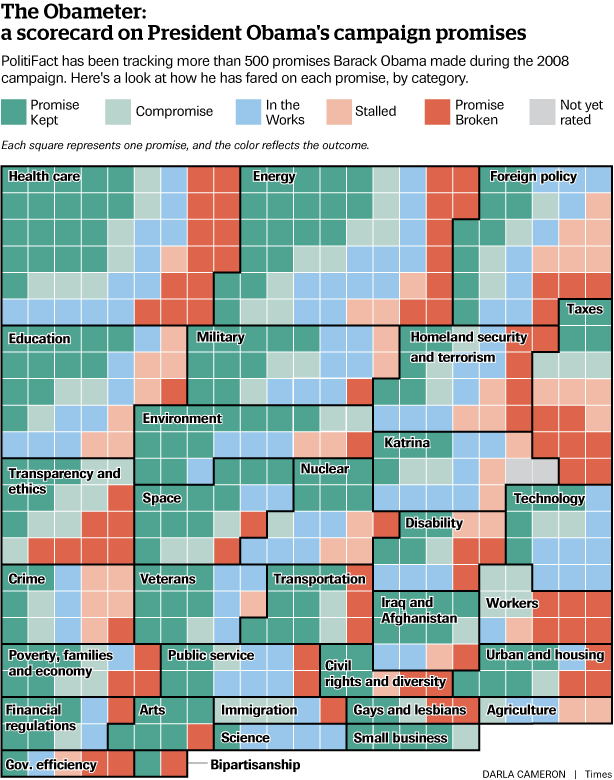