While Ben Carson faces more and more questions over his personal history and grasp of historical facts, a political group wanted to remind the public of some of the retired neurosurgeon’s more controversial policy positions.

Ultraviolet, which says it is "mobilized to fight sexism and expand women’s rights," posted an image about Carson on its Facebook page on Oct. 26, 2015 (it’s also on the group’s website). Labeled "Ben Carson is leading in Iowa: Here’s 5 things you need to know," the viral image listed five statements Carson has made, some before he declared his candidacy in May 2015.

The talking points don’t really require us to head to the Truth-O-Meter, since Ultraviolet provided proof of when each statement was made. But we did decide all of them deserved some more context. 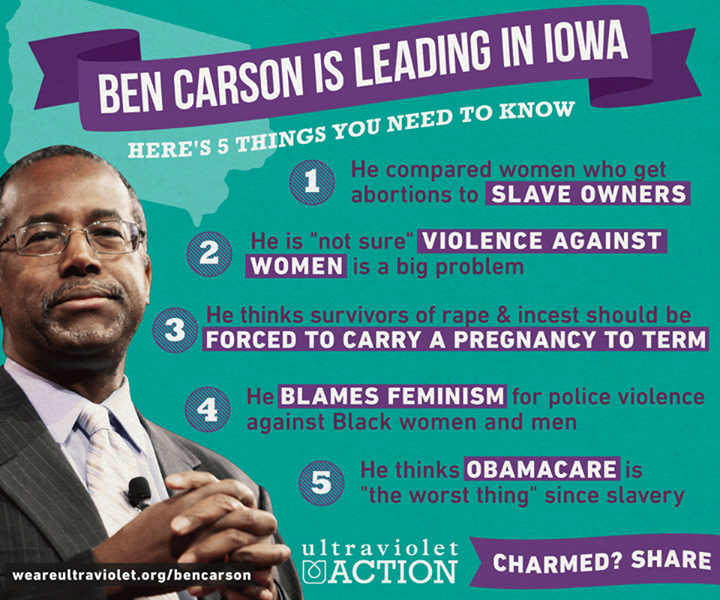 We reached out to Carson’s campaign to see if they disputed any of Ultraviolet’s characterizations but didn’t hear back. We’ll take each statement one at a time:

1. He compared women who get abortions to slave owners: On the Oct. 25 episode of Meet the Press, Carson lambasted abortion rights advocates, saying, "We’ve allowed purveyors of a vision to make mothers believe that baby is her enemy and that they have a right to kill it."

Host Chuck Todd asked Carson whether he thought a woman with an unwanted pregnancy had a right to get an abortion. Carson said no, then gave the following example to support his position:

"During slavery, a lot of the slaveowners thought that they had the right to do whatever they wanted to that slave. Anything that they chose to do," Carson said. "And, you know, what if the abolitionists had said ‘I don’t believe in slavery, I think it’s wrong, but you guys do whatever you want to do.’ Where would we be?"

He also told Todd he thought judicial candidates’ records should be examined to determine where they stood on the issue and would "love to see" Roe vs. Wade overturned.

2. He is "not sure" violence against women is a big problem: Carson made this comment but also seemed to back off of it while he was a Fox News contributor. During a Sept. 11, 2014, appearance on The O’Reilly Factor, host Bill O’Reilly asked about statements Carson made about former Baltimore Ravens running back Ray Rice.

Rice in February 2014 was caught on a hotel surveillance video punching then-fiancee Janay Palmer, who later married him. Criminal charges were dropped in favor of counseling, but Rice was cut by the Ravens and hasn’t played in the NFL since.

Carson, who had said the public shouldn’t automatically be "demonizing this guy," said the backlash had been so great against Rice because he was a public figure who was so much bigger and stronger than Palmer, calling the attack "despicable."

"You know how many millions of men do that?" O’Reilly asked. "It’s not an isolated deal. It’s a terrible plague."

"I’m not sure that’s true," Carson said. "To have a man who is an NFL star who is very, very bulked up against a –"

O’Reilly cut him off with, "I’m telling you, battery against women in this country and around the world is just out of control, doc."

Carson went on to clarify his comments, saying he meant Rice must have "some real deep psychological issues." When O’Reilly again called violence against women a plague, Carson acknowledged, "No question. It’s a big problem."

3. He thinks survivors of rape & incest should be forced to carry a pregnancy to term: Carson made comments on this topic in the same Oct. 25 interview on Meet the Press as the first statement. Todd asked Carson whether he thought there should be exceptions for abortions in the case of rape or incest.

"Rape and incest, I would not be in favor of killing a baby because the baby came about in that way," Carson said. "And all you have to do is go and look up the many stories of people who have led very useful lives who were the result of rape or incest."

4. He blames feminism for police violence against black women and men: This point may be a stretch, because Carson didn’t make a direct connection between feminism and police brutality, but he did comment on the topic.

In a widely shared post dated Dec. 1, 2014, RightWingWatch.org captured and posted video of  Carson calling into American Family Radio’s Today’s Issues show from the week prior.

While discussing the police killing of teenager Michael Brown in Ferguson, Mo., Carson, the only African-American GOP candidate, said that the lack of father figures for inner-city black children was to blame. He said part of the problem was that young people did not know how to respond to authority. Host Lauren Kitchen Stewards blamed a "sense of entitlement" among the youth, prompting Carson to suggest the root of the issue.

5. He thinks Obamacare is "the worst thing" since slavery: This comment goes back to Oct. 11, 2013, when Carson spoke at the conservative Values Voter Summit in Washington.

"You know, Obamacare is really, I think, the worst thing that has happened in this nation since slavery," Carson said. "And it is in a way, it is slavery in a way, because it is making all of us subservient to the government, and it was never about health care. It was about control."

Carson stood by his opposition to the Affordable Care Act on CNN in December 2014.

"Slavery was a horrible thing and affected many people in horrible ways, some of those effects still present today. So, no, it is not the same as slavery," he told Wolf Blitzer. "However, what needs to be understood here is that the way this country was set up, the people — we the people — were set up at the pinnacle of power in this nation. The government is supposed to conform to our will.