Seeking to stem the tide of momentum for frontrunner Donald Trump, Ted Cruz today named Carly Fiorina as his vice presidential pick -- should he get the GOP nomination.

We've fact-checked Fiorina 22 times during her runs for the U.S. Senate in California and for the 2016 Republican presidential nomination. You can see all the fact-checks here.

Fiorina's break down by rating. 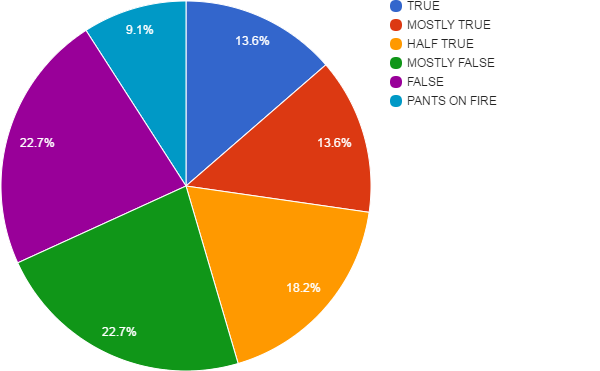 A standard attack against Fiorina is over her time running Hewlett-Packard.

Here are three fact-checks that will get you up to speed.

During her presidetnial campaign, Fiorina laid out defunding Planned Parenthood as a priority.

"I dare Hillary Clinton, Barack Obama to watch these tapes," she said on the stage at the Ronald Reagan Presidential Library Sept. 16. "Watch a fully formed fetus on the table, its heart beating, its legs kicking, while someone says, 'We have to keep it alive to harvest its brain.' "

The videos, which amount to at least a dozen hours, are produced by the anti-abortion Center for Medical Progress. They primarily show people posing as tissue brokers and talking with Planned Parenthood employees about procuring fetal tissue for medical research.

Fiorina’s claim makes it sound like there is actual footage of Planned Parenthood examining an aborted fetus whose heart is still beating, while someone says "we have to keep it alive to harvest its brain." There isn't.

Listed inside the story.