How did St. Petersburg mayor Rick Kriseman do on his campaign promises?

Mayor Rick Kriseman made several new promises for St. Petersburg ahead of his second term, including raising the minimum wage to $15 for city workers and reducing the city’s poverty rate.

Before round two as mayor starts Jan. 2, PolitiFact Florida evaluated Kriseman’s performance on 25 campaign promises from round one.

PolitiFact Florida launched the Krise-O-Meter four years ago to track Kriseman’s 2013 campaign promises about the pier, the Tampa Bay Rays stadium and a slew of local initiatives.

Our analysis shows he kept a majority of his promises, such as establishing a community policing philosophy, helping grow small businesses and expediting the demolition of blighted homes.

But Kriseman broke several major pledges, most notably on the pier, which he said would be replaced by the end of 2015.

In an interview with PolitiFact Florida, Kriseman said he knew from the start it would be difficult to make good on his promises without any challenges.

"On the day I was sworn in, in my inaugural address, I said ‘I’m going to make mistakes,’ " Kriseman said. "And certainly I’m not immune to mistakes."

By the end of 2017, 16 of Kriseman’s promises are rated Promise Kept, four are Promise Broken, two are Compromise, two are In the Works, and one is Stalled. 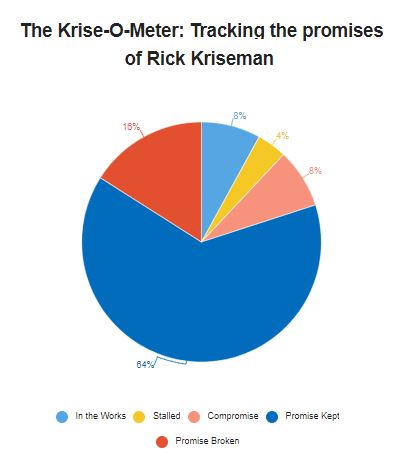 Not all promises are created equal. Some were relatively low bars to meet, such as giving a state of the city address each year or giving neighborhoods in St. Petersburg some TLC by installing signs representative of the communities in the city and making his staff available to press on a regular basis

Darryl Paulson, an emeritus professor of government at the University of South Florida St. Petersburg, said those are like saying, "I will get out of bed in the morning."

Others were more complicated to meet, and measure. He said, for example, he would improve trust between the community and the police. A few months after taking office, Kriseman hired Clearwater Police Chief Anthony Holloway to replace former Chief Chuck Harmon.

Holloway began making changes to adopt that philosophy, including a Park, Walk and Talk program that encourages officers to leave their cruisers and talk to residents. While it can be hard to assess the program's success, community leaders told the Tampa Bay Times they like the program and want to see it improve in the future.

Then there’s the construction of the new pier.

The old inverted-pyramid pier was 40 years old and crumbling when it shut down in 2013. Kriseman was eager to get the new project going, so he promised to have new task force recommendations by April 2014, submit a final design to city council by September 2014 and have the structure built by the end of 2015.

But none of that happened. We rated all three pledges Promise Broken. (Another promise to reduce or eliminate the $1 million pier subsidy is Stalled.)

Construction on the project started in the summer of 2017 after it was demolished in the second half of 2015. It is set to be finished in 2019.

Kriseman said it became obvious in the beginning that he would have to slow the process down to avoid making mistakes. By taking more time, the city was able to give residents the opportunity to voice their opinion and it gave the city time to work with contractors and architects to assure the costs stayed in budget.

"All of these things added together are why it didn’t end up being realistic," Kriseman said.

Another challenging set of promises for Kriseman had to do with negotiations between the Tampa Bay Rays and the city. The results were a mixed bag.

Kriseman promised voters that if the Tampa Bay Rays want to leave their home at Tropicana Field, they could — as long as the Rays paid the city to look elsewhere.

The city gave permission to the Rays to look elsewhere in Tampa Bay in 2016, but that agreement did not include an exploratory fee like Kriseman promised. Instead, it included other fees that will cost the Rays millions if they actually move. Overall, this promise was rated Compromise.

Kriseman also promised to protect St. Petersburg taxpayers in negotiations, which we rated Promise Kept.  If the Rays leave before 2027, they have to forfeit their share development rights to Tropicana Field. This is especially significant, since Tropicana Field's 85 acres are considered prime downtown real estate. Still, the Tampa Bay Rays haven't made a decision on a new ballpark site yet, so it is possible the rating could change.

With Kriseman’s second term, we will begin tracking 10 promises from his campaign against former Mayor Rick Baker.

Some of the promises include working to reduce poverty in St. Petersburg by 30 percent, raising the minimum wage to $15 by 2020 for city workers, redeveloping the Tropicana Field site to benefit St. Pete residents, helping transition the city into 100 percent clean energy by implementing an Integrated Sustainability Action Plan, and investing more than 300 million to upgrade the city’s sewer system.

This time around, Kriseman says his campaign promises are not just about what he can accomplish in the next four years.

"I’m OK if things that I’m working on don’t happen during my time and happen after I’m done,"he said, "as long as I create a pathway to make it happen."

Interview, Darryl Paulson, an Emeritus Professor of Government at the University of Florida - St. Petersburg, Dec. 15, 2017