UPDATE, Jan. 16, 2020: The nonpartisan Government Accountability Office on Jan. 16 concluded that the White House Office of Management and Budget violated the Impoundment Control Act by withholding security assistance to Ukraine.

"Faithful execution of the law does not permit the President to substitute his own policy priorities for those that Congress has enacted into law," the GAO wrote. "OMB withheld funds for a policy reason, which is not permitted under the Impoundment Control Act."

Read the full GAO decision here. What follows is our original post:

But the report also suggests that Trump ran afoul of the Impoundment Control Act, a 1974 law meant to reassert Congress’ power of the purse.

Not familiar with that one? Neither were we, so we decided to take a look at its history and relevance to the Democrats’ case against Trump.

The Constitution gives Congress the power to make laws and decide how the government will spend money. The president is responsible for making sure public funds actually get spent according to Congress’ wishes.

Before 1974, presidents sometimes impounded — or refused to spend — congressionally appropriated funds. But when President Richard Nixon was in office, Congress worried that Nixon was abusing that power by withholding funding from programs he opposed.

"There are many legitimate reasons that presidents might slow the expenditure of funds, but Nixon had abused presidential discretion and cancelled funds for policy, not administrative, reasons," said James Pfiffner, professor of public policy at George Mason University.

Now, whenever presidents want to rescind or freeze congressionally appropriated funds, they must first notify Congress by sending a "special message" that details the amount of money involved and the reasons to rescind or withhold it.

If the president is asking to permanently rescind money, Congress must give its approval. But if Congress does not pass a bill approving the retraction within 45 days, the money must be made available for spending, according to the law.

If the president is only asking to temporarily delay spending, then congressional approval is not required. But the president still has to send Congress a "special message" to let it know. There are other requirements, too.

For example, the act says a request to delay spending is "permissible" only if the hold provides for unforeseen contingencies, saves money or is specifically provided by law. Spending cannot be stalled through the end of the fiscal year, either.

In 2018, the Government Accountability Office ruled that a president cannot withhold funds through their expiration date, because doing so would effectively amount to rescinding them without congressional approval.

How footnotes blocked aid to Ukraine

The Democrats’ report argues that Trump defied the act by withholding assistance from Ukraine to pressure Zelensky into announcing the investigations he wanted.

"Because the aid was appropriated by Congress, on a bipartisan basis, and signed into law by the President, its expenditure was required by law," the report says.

Mark Sandy, a career official in the White House Office of Management and Budget, testified that the Trump administration never sent Congress a proposal to rescind or delay the money earmarked for Ukraine. Pentagon official Laura Cooper said the same.

Instead, the OMB implemented the hold on aid to Ukraine through footnotes in a series of funding documents, known as apportionments, sent to the Defense Department. The footnote in the first document, sent July 25, said the Pentagon couldn’t spend the money until Aug. 5.

A second line in the footnote said the "brief pause in obligations" would not prevent the Pentagon from disbursing the funds before they expired. That was meant to get "to the heart of that issue about ensuring that we don’t run afoul of the Impoundment Control Act, which means that you have to allow for the timely execution," Sandy said in his testimony. 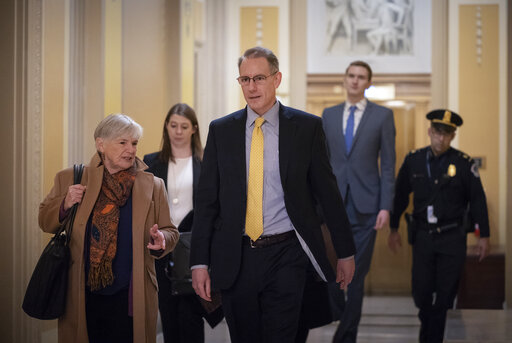 Office of Management and Budget official Mark Sandy arrives at the Capitol to testify in the House impeachment inquiry on Nov. 16, 2019. (AP/Applewhite)

After the first document was sent, Michael Duffey, a Trump-appointed OMB official, told Sandy he would handle the apportionments going forward. In subsequent documents, Duffey continued to delay the scheduled release date for the aid until the hold was ultimately lifted on Sept. 11.

Officials in the State and Defense Departments had already taken issue with the hold by this point. Cooper and Tim Morrison, then the top Russia expert on the National Security Council, both testified that impoundment concerns were raised at interagency meetings in late July.

At a July 31 meeting, Cooper told participants that the only legal options for withholding aid required the notification of Congress, and that the money would have to be released in early August if it was going to be fully distributed before it expired, she testified.

As the end of the fiscal year — Sept. 30 — drew near, this pushback intensified. 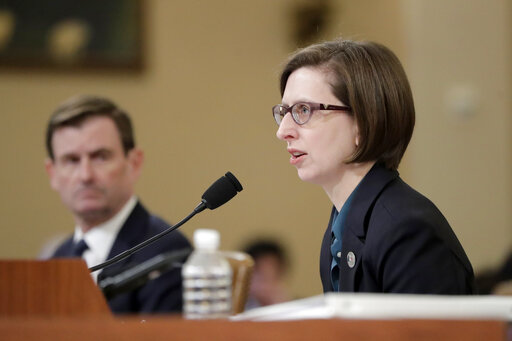 Cooper testified that in mid August, the Pentagon renewed concerns that it would not be able to get the funds to Ukraine before their expiration, prompting Duffey to remove the footnote line about a timely disbursement of funds in the funding documents he sent out in late August and September.

Meanwhile, Sandy "continued to express concerns about the potential implications vis-à-vis the Impoundment Control Act," he said, and two OMB officials resigned around this time.

Was the law broken?

The Democrats’ report suggests that the White House violated the Impoundment Control Act by failing to notify Congress of the hold on security assistance to Ukraine and by preventing the Pentagon from having adequate time to disburse all the money before it expired.

Experts told us the fact that the aid was eventually released complicates the issue slightly.

"I have every reason to think Trump and his aides violated the statute," said Louis Fisher, visiting professor at William & Mary Law School and author of a book on presidential spending powers. "Of course, the funds were eventually released."

The report notes that roughly $35 million of aid to Ukraine remained unspent as the end of the fiscal year approached. As a result, Congress passed a bill on Sept. 27 — three days before that money was set to expire — to make sure that the $35 million could still be spent.

Pfiffner, the George Mason University professor, told us that while there "seems to have been a post hoc rationalization for delaying the Ukraine funds," it would be up to a court to decide whether the near-expiration of that $35 million would constitute a violation. The hold was lifted on Sept. 11, with some time left in the year to distribute the frozen funds.

"It might be argued that the law would not actually be broken until Oct. 1, the beginning of the (2020) fiscal year," he said. "But the DOD and OMB career people know what time is necessary to actually transfer the funds, and had legitimate concerns about violating the law."

Email and phone interviews with James Pfiffner, professor of public policy at the Schar School at George Mason University, Dec. 4, 2019