The death of NBA star Kobe Bryant was followed by a slew of common hoaxes and conspiracies that follow big news about celebrities.

Bryant, a retired Los Angeles Lakers player, died in a private helicopter crash in Calabasas, Calif., on Jan. 26. His 13-year-old daughter and seven others were also killed.

Officials are still investigating the cause of the crash, but some social media users have already fabricated their own details of Bryant’s death, including out-of-context videos, made-up biographical details and a hoax about former Secretary of State Hillary Clinton’s involvement.

The posts were flagged as part of Facebook’s efforts to combat false news and misinformation on its News Feed. (Read more about our partnership with Facebook.) Together, they’ve been shared thousands of times.

While the false posts were shared widely on social media, they follow a familiar playbook for misinformation about celebrity deaths: suggest it was planned, post false videos and claim it never happened. 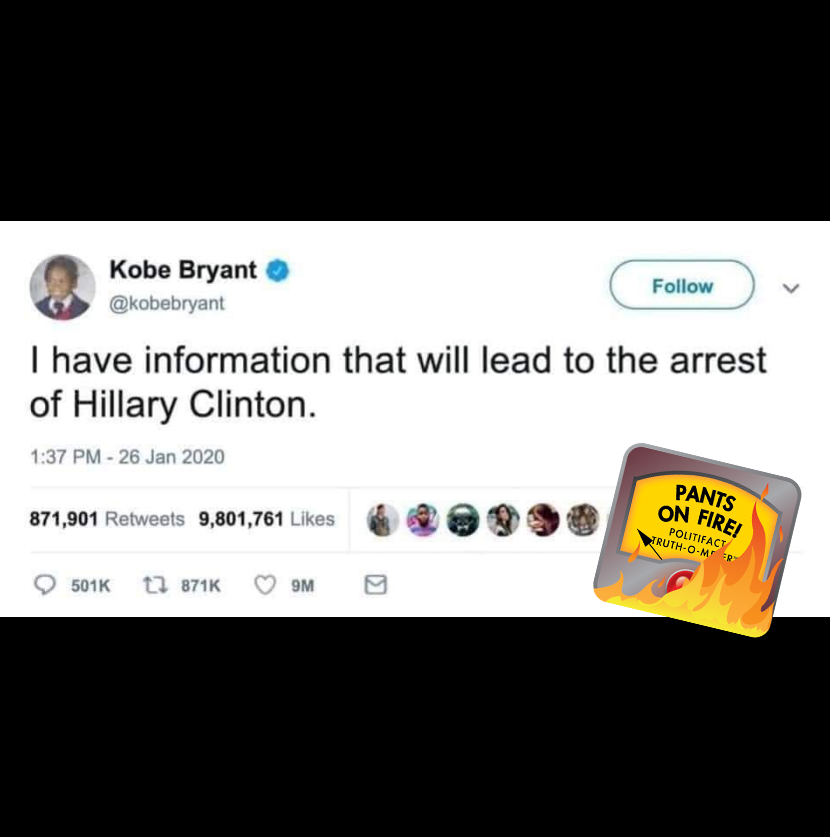 Clinton did not murder Bryant

One of the most common recurring conspiracy theories about celebrity deaths is that Hillary Clinton is involved. Bryant’s death was no different.

"I have information that will lead to the arrest of Hillary Clinton," read the purported tweet, which has since been deleted on Facebook. We found similar screenshots on Facebook.

We rated the post Pants on Fire! — Bryant didn’t tweet that. (He didn’t tweet anything on Jan. 26.) Some websites make it easy to create fake screenshots of tweets that were never actually posted.

But according to Google Trends, search queries for Bryant and Clinton spiked in the hours after his death.

We’ve debunked many claims Clinton has killed political enemies. The typical formula for these conspiracies is as follows:

Someone in the Clinton family orbit dies in an accident or commits suicide. Official accounts confirm the means of death by accident or suicide. Then conspiracists suggest the "real" story is that the individual was offed before they could reveal damaging information about the Clintons.

That misinformation formula has been applied to the deaths of people ranging from John F. Kennedy Jr. to a 72-year-old New Jersey woman. The imposter Bryant tweet is the latest example of that trend — which has become so ubiquitous that it’s now a meme.

The meme dates back to 2016, when WikiLeaks founder Julian Assange published stolen emails from the Clinton campaign. Social media users started sharing posts with language similar to "I have information that will lead to the arrest of Hillary Clinton." 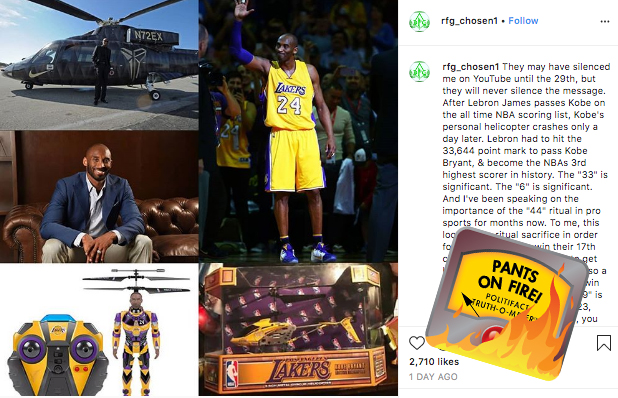 The next step in spreading misinformation about celebrity deaths: claim it was planned all along.

That’s what a Jan. 26 Instagram post alleges. The caption on a collage of photos outlines an elaborate conspiracy about how the basketball star’s death was planned for the benefit of two sports teams and Lakers player LeBron James.

"After LeBron James passes Kobe on the all time NBA scoring list, Kobe’s personal helicopter crashes only a day later," reads the post, which has nearly 3,000 likes. "To me, this looks like a ritual sacrifice in order for the LA Lakers to win their 17th championship, & for LeBron to get his 4th ring. I believe this was also a ritual sacrifice for the 49ers to win the Superbowl."

The hoax was posted by RFG ChosenOne, an Instagram profile and YouTube channel with a cumulative following of more than 86,000. The accounts regularly publish elaborate conspiracy theories.

We rated the post Pants on Fire, reserved for the most ridiculous and unsubstantiated claims. The helicopter went down in fog dense enough that the Los Angeles Police Department grounded its helicopters.

The National Transportation Safety Board is working with the Federal Aviation Administration, the helicopter’s manufacturer and the company that made its engine to collect evidence about the crash, according to the Washington Post. The investigation will look at weather data, radar information air traffic control communications, maintenance logs and the pilot’s record.

The misconception that celebrity deaths and other tragedies are planned is a fairly common theme of misinformation.

Following mass shootings in the United States, so-called "false flag" conspiracy theories regularly crop up online. They vary widely, from claims that the media fabricated the tragedies to allegations about shadowy government plots to push for gun control. Experts say people fall for them because they distrust the powers that be. 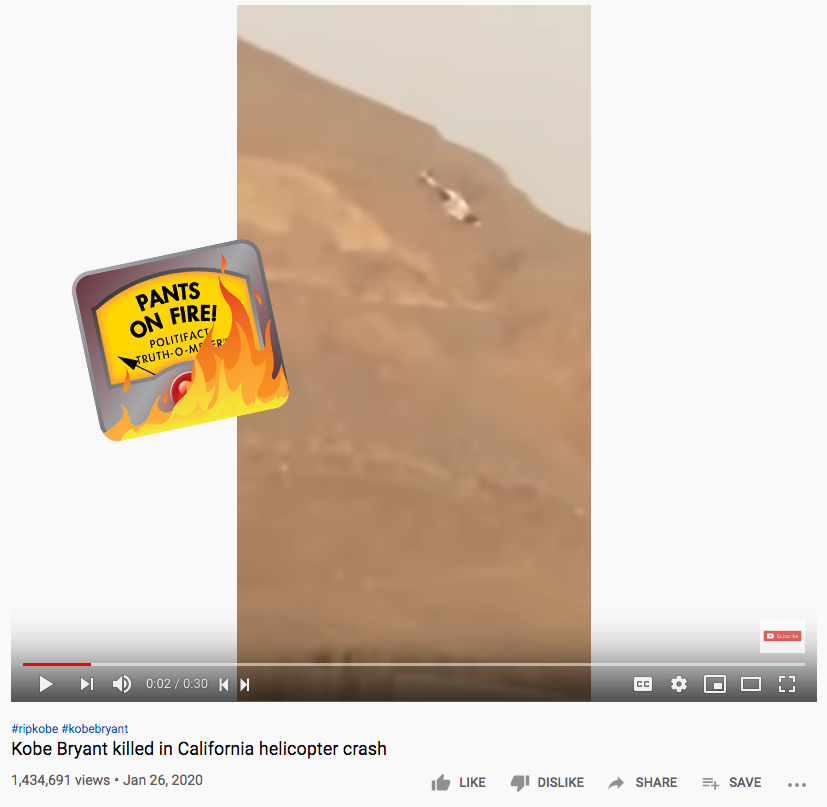 A video posted on YouTube Jan. 26 wrongly gave viewers the impression that it shows footage of the accident as it happened. It shows what looks like a helicopter spinning out of control against a mountainous background before it crashes and bursts into flames and billowing black smoke.

The video is titled: "Kobe Bryant killed in California crash" and has the hashtags #ripkobe and #kobebryant. It has been viewed more than 1 million times.

But the video is bogus — we rated it Pants on Fire!

Business Insider reported Bryant’s helicopter was a Sikorsky S-76B. Credible news photos show the aircraft was black, not a light color like the one in the YouTube video. Images from the crash scene show a foggy, green landscape, not the arid-looking background in the video. What’s more, there is no fog in the YouTube video.

We also rated Pants on Fire a similar out-of-context YouTube video of a helicopter crash. It shows what looks like a yellow, white and blue helicopter slowly descending before catching on something on the ground and spinning into a ball of flames. Like the other clip, it attracted a lot of attention on YouTube, racking up nearly 1 million views.

Posting unrelated videos out of context is an easy way for misinformers to dupe a lot of people on social media without putting in much effort.

Pro tip: Before sharing something on social media, always check to see that the caption actually aligns with what the video claims to show. 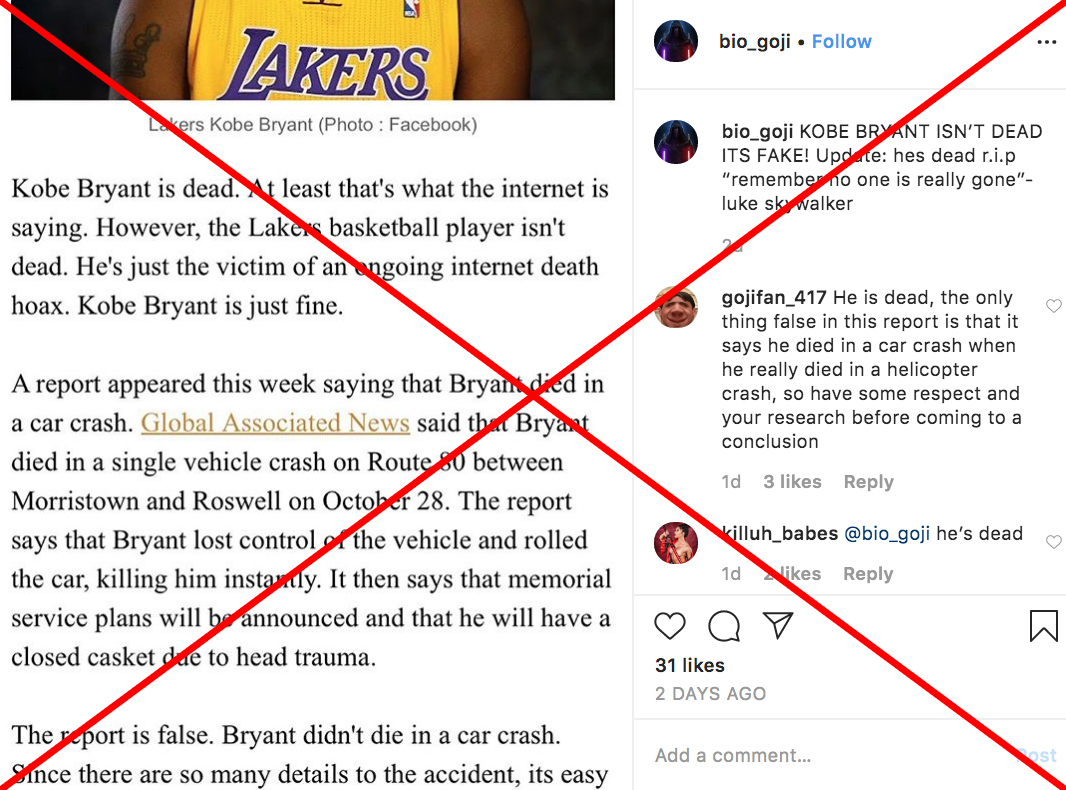 The final step in misinforming large audiences about the death of a celebrity: claim it never happened.

In an Instagram post published Jan. 26, a user published a screenshot of an article that claims reports about Bryant’s death are part of an "ongoing internet death hoax."

Ironically, the Instagram post is the hoax. A caption for the photo was later updated to say: "hes dead r.i.p."

Upon closer inspection, the screenshot depicts a 2012 story from a website called Travelers Today. The article is about a Bryant death hoax that circulated online at the time claiming he died in a car crash. (He didn’t.)

In 2016, Snopes reported on false news stories that alleged the frontman for the band The Doors, Jim Morrison — who died in 1971 — was found alive in a Paris retirement home. Rapper Tupac Shakur was shot and killed in September 1996, but a variety of conspiracy theories claim he’s living abroad. Esquire has a list of similar celebrity conspiracies, including a fabricated claim that JonBenet Ramsey actually grew up to become Katy Perry.

Bryant’s death is the latest example of this trend. And it’s unlikely that he’ll be the last.

See a questionable social media post, image or video about Kobe Bryant’s death? Send it to [email protected] and we’ll fact-check it for you.