Demonstrators from various organizations congregate on Fortaleza street to protest against the constant selective blackouts that the island has suffered for weeks due to low power generation, in San Juan, Puerto Rico, Oct. 1, 2021. (AP)

High electricity bills and an unreliable system have heated up a longstanding debate about why Puerto Rico doesn’t have better electricity service.

A fire at a power plant in Puerto Rico left more than 1 million people without electricity for five days in April — prompting hospitals to rely on generators and causing shutdowns of schools, restaurants and stores.

On July 7, more than 38,000 customers were again left in the dark for hours after a system failure, cause so far undetermined. The regular blackouts worry people on the island who question whether the electric grid will continue working during the hurricane season, which runs from June to November.

Puerto Ricans are voicing their frustration on social media and by protesting on the streets of San Juan, Puerto Rico’s capital, as power outages strain their daily lives and electricity costs keep rising. Puerto Rico, an island in the Caribbean and a U.S. territory, is home to about 3.2 million people, about 43% of whom live below the poverty line.

LUMA, the private power company in charge of distributing and transmitting electricity in Puerto Rico, has announced the seventh consecutive monthly bill increase this year; prices in July rose to 34 cents per kilowatt-hour.

To compare, customers in the U.S. pay an average 14 cents per kWh.

Puerto Rico’s electricity rates are "on par" with rates in Hawaii, which are the highest in the U.S., said Kenneth B. Medlock III, senior director of the Center for Energy Studies at Rice University’s Baker Institute for Public Policy. Both islands need to produce their own power because it cannot be imported from the mainland, and that raises prices for consumers.

On the other hand, Texas has the lowest electricity prices in the U.S. because it produces its energy from crude oil and natural gas reserves in the state, Medlock said. 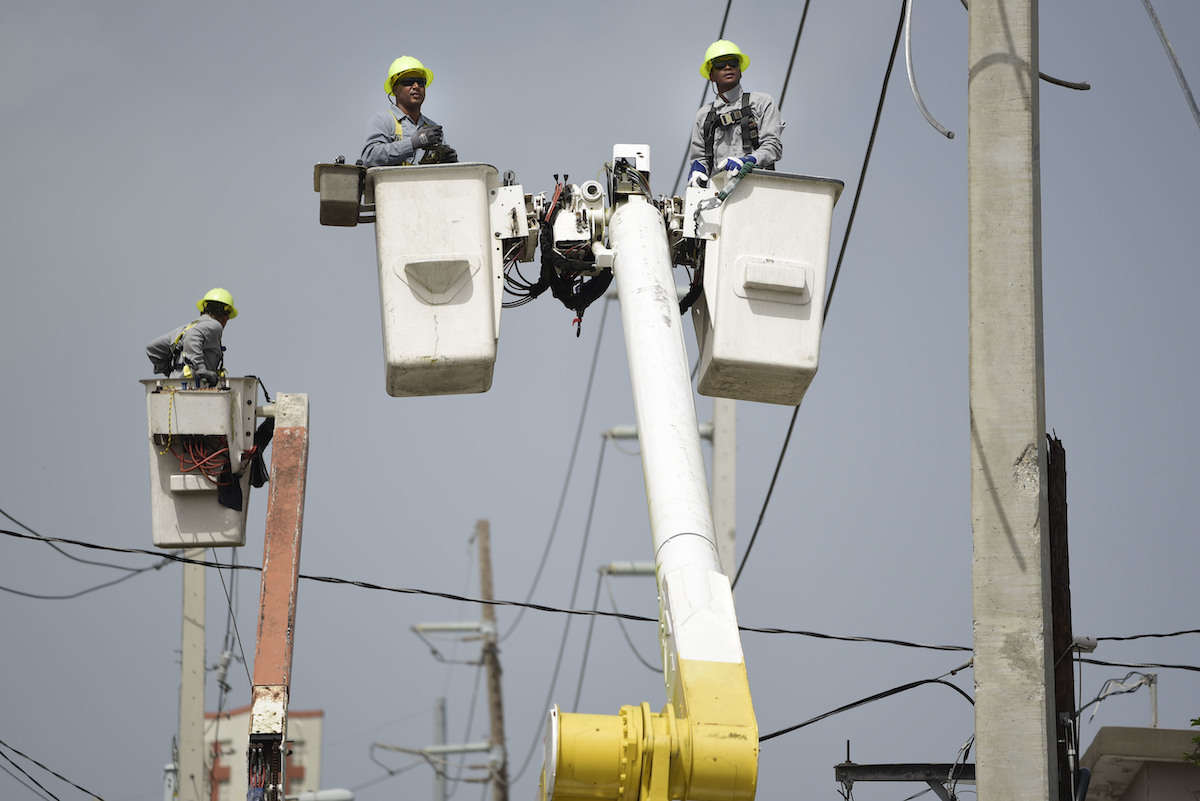 In 2018, then-Gov. Ricardo Rosello announced the privatization of the Puerto Rico Electric Power Authority, the government-owned company that generates electricity in the island. The company had filed for bankruptcy in 2017 with $9 billion in debt.

The company’s privatization started a reconstruction period to fund a more reliable power system after Hurricane Maria destroyed more than 80% of the transmission and distribution infrastructure in 2017. Some Puerto Ricans did not have power for about a year after the hurricane.

In June 2020, Gov. Pedro Pierluisi announced a 15-year contract with LUMA, a private company that would handle the distribution and transmission of electricity within the island, along with repairs after outages. The Puerto Rico Electric Power Authority is still around, but is now in charge only of producing electricity.

LUMA’s first reliability report in 2021 showed an increase in how long it took for Puerto Ricans to get power back after outages. It took LUMA about 323 minutes, or about 5.4 hours, to repair outages, compared with the 155 minutes, or about 2.5 hours, in 2020 when repairs fell under the Puerto Rico Electric Power Authority’s purview.

Why Puerto Rico’s electricity prices are so high?

Electricity in the U.S. is produced through high-voltage transmission lines and substations that convert high-voltage power to lower-voltage power. It’s distributed through interconnected power lines that run through Canada, a portion of Baja California, Mexico and the United States.

Because of the distance between the continental U.S. and Puerto Rico, these power grid lines cannot be connected to the island’s electrical grid. So, the island relies on plants that burn oil — one of the most expensive ways to produce electricity.

"Historically, there has not been a strong incentive to invest in generation capacity in Puerto Rico. Solar has increased in the last few years, but that is really it," Medlock said.

He said most power on the island is petroleum-based; the island’s petroleum usually originates from France, Algeria, Norway and Russia (the U.S has banned imports of Russian oil after Russia’s invasion of Ukraine).

According to the Puerto Rico Energy Bureau, 95% of the island’s power comes from fossil fuels, and 5% from renewable energy.

Another factor that drives up electricity costs in Puerto Rico is a federal law known as the Jones Act, said Miguel Velez-Reyes, a professor in electrical and computer engineering at the University of Texas, El Paso.

Under the Jones Act, vessels that transport U.S. goods between Puerto Rico and the United States must be built, owned and operated in the U.S. But due to the lack of liquefied natural gas tankers that comply with these requirements, Puerto Rico has to seek foreign producers, which contributes to the island paying more for these direct shipments.

The United States' sanctions against Russian oil have also caused electricity prices to increase for Puerto Ricans as the fossil fuel market becomes more volatile. The sanctions come after Russia’s invasion of Ukraine and as President Joe Biden seeks to reduce U.S. dependence on Russian oil.

Electricity rates are set by Puerto Rico’s Energy Bureau, an independent, specialized body created by the Puerto Rican government to regulate, monitor and enforce energy policy on the island. LUMA uses information provided by the bureau — such as the cost of fuel used in private electricity plants and the cost of production — to calculate electricity costs, Hugo Sorrentini, LUMA’s spokesperson, told PolitiFact.

Why is the electrical system failing?

After Hurricane Maria hit Puerto Rico in 2017, electric company workers denounced the lack of funding to fix and maintain aging equipment and what they said is the government’s mismanagement of the electric grid.

Puerto Ricans are continually experiencing blackouts because there hasn’t been enough investment and oversight — from the government and the contracted company, LUMA — to repair the electric grid, a study by the Institute of Energy Economics and Financial Analysis said. LUMA has not responded to the study’s findings.

The Federal Emergency Management Agency in June said it had approved nearly $600 million to buy materials needed to rebuild Puerto Rico’s power grid based on a list submitted by the Puerto Rico Electric Power Authority. FEMA said that’s in addition to $9.6 million that will be used to replace poles "with ones that can withstand winds of up to 160 miles per hour, emergency generators to prevent damage to replacement batteries at substations, and the elevation of substations located in flood zones."

The agency said it has approved $12.8 billion for Puerto Rico Electric Power Authority to address the damages from Hurricane Maria and recent earthquakes.

Read this article in Spanish.

CORRECTION, July 22, 2022: The story has been updated to accurately reflect how the Jones Act impacts the cost of electricity in Puerto Rico.

The Economic Research Organization at the University of Hawaii, Why are Hawaii’s Electricity Prices so High?, March 6, 2014

Email interview with Kenneth B. Medlock III, James A. Baker, III, and Susan G. Baker Fellow in Energy and Resource Economics at the Baker Institute and the senior director of the Center for Energy Studies, July 7, 2022.