Occupy Democrats
stated on June 16, 2015 in a post on Facebook:
Says Hillary Clinton "has donated every cent she's ever earned from speaking fees to charity."

Now a liberal group is bending the Truth-O-Meter in Clinton’s defense.

The group, Occupy Democrats, posted a recent Facebook meme that seeks to compare Clinton’s paid speeches to those given by former President George W. Bush. The meme has been shared more than 25,000 times.

It reads: "Hilary (sic) has donated every cent she's ever earned from speaking fees to charity. Bush keeps all of his speaking fees." 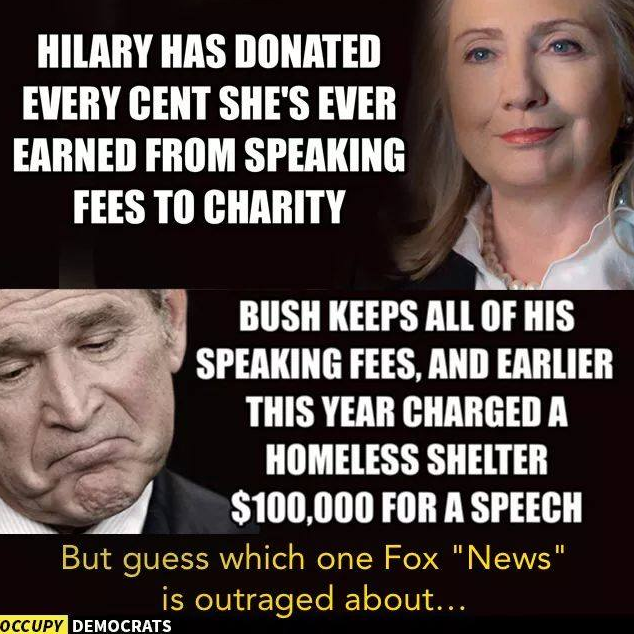 We’ll leave Bush out of this for the moment. As for the claim that Clinton "donated every cent she's ever earned from speaking fees to charity," that’s wrong.

No one from the Occupy Democrats group responded to our request for comment, but we believe its claim is based on 2014 comments by Clinton. When students at the University of Nevada, Las Vegas, asked that Clinton return her $225,000 speaking fee, Clinton noted that "all of the fees have been donated to the Clinton Foundation for it to continue its life-changing and life-saving work."

"So it goes from a foundation at a university to another foundation," Clinton told ABC News, with regard to the UNLV speech.

So are other speeches at universities and colleges as well as a few speeches organized by private groups such as Citibank, Chicago House and Goldman Sachs.

But that’s not all of the speeches for which Clinton has been paid.

In May, the New York Times published Clinton’s 2015 financial disclosure form. Covering a period from January 2014 to March 2015, Clinton lists a total of 51 speech fees that have been added to her personal account from a variety of companies. Not including her husband’s fees which also appear on the same disclosure, Clinton’s speech fees end up totaling more than $11 million.

Occupy Democrats claimed Clinton "has donated every cent she's ever earned from speaking fees to charity."

That’s a misreading of Clinton’s comments in 2014, when she said speaking fees at colleges and universities were donated to the Clinton Foundation.

PunditFact, "Glenn Beck says Hillary Clinton makes more at one speech than average CEO in a year," May 28, 2015