Carly Fiorina
stated on November 1, 2015 in comments on "Fox News Sunday":
"We have record numbers of people living in poverty."

Carly Fiorina said on Fox News Sunday that she "misspoke" when she used a striking but inaccurate statistic about women and unemployment during the third GOP debate. Nonetheless, Fiorina suggested the real culprit is the "liberal media."

Numerous fact-checkers, including PolitiFact, debunked Fiorina’s claim that "92 percent of the jobs lost during Barack Obama’s first term belonged to women." To FIorina, that’s quibbling with details to bury the larger truths.

We wanted to check out her claim that there are more people living in poverty now than ever before.

What the numbers say

Looking at data from the Census Bureau, Fiorina’s right that the number of people living in poverty (46.7 million in 2014) is the highest since the census began keeping track in 1959. However, the poverty rate — the measure typically used — is nowhere near historical highs.

"Most economists would agree that standards of living have increased substantially since 1959, and poverty, especially elderly poverty, was more severe in 1959 than today," said John Iceland, a professor of sociology and demography at Pennsylvania State University and author of  Poverty in America.

Here’s a graph from a Census Bureau report published in September of 2015 that illustrates this point: 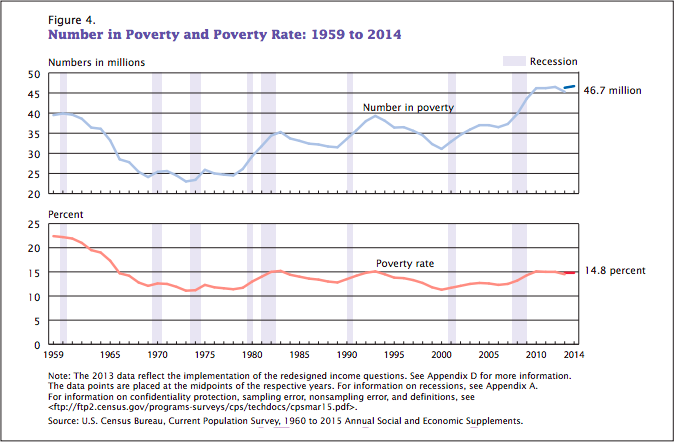 All the experts we spoke to cautioned against using raw numbers when making comparisons. Instead, analysts typically use rates to correct for the growing population of the nation.

"If we use absolute values and not rates, then the following statements are both true: There are more people who are poor than ever today. But GDP is much higher today than it ever was under a Republican president, so the Obama Administration economic policy is a smashing success," said Sheldon Danziger, the president of the nonpartisan Russell Sage Foundation, which funds research on poverty.

"No president in the last 40 years has been able to lower the number of people in poverty. Poverty rates fell most under the Bill Clinton Administration than any since Nixon," Danziger said.

What’s more, given the economic impact of the recession, poverty is actually lower than expected, in part due to spending in the stimulus package, according to Austin Nichols, a senior research associate at the Urban Institute, a nonpartisan economic and social policy think tank.

"So if Obama had any effect on poverty, it was to lower poverty, though presidents tend to have smaller impacts on broad economic trends than they would like to believe," he said. "In fact, when you use a broader definition of poverty that encompasses noncash aid, poverty hardly changed through the recession, which was a surprise to many who work on these issues."

As for Fiorina’s claim that "record numbers of women ...are living in poverty," she’s again accurate that more women live in poverty today than ever (about 162,000 in 2014). But the overall rate has remained relatively unchanged.

Here’s a chart using census data that illustrates that point:

A Fiorina spokeswoman passed along two articles highlighting the increase in raw numbers and told PolitiFact that the increase should not be trivialized.

Fiorina said, "We have record numbers of people living in poverty today."

In terms of raw numbers, Fiorina is correct that more people live in poverty today than ever in the 56 years the census has been keeping track.

However, absolute value is an inappropriate measure for poverty analysis, experts said. If we use the right measure, poverty rate, we see that poverty has decreased significantly since 1959.

We rate Fiorina’s claim Half True.