Carly Fiorina
stated on November 10, 2015 in a Republican presidential debate in Milwaukee:
"Obamacare isn't helping anyone."

The Affordable Care Act -- Obamacare to some -- is a perennial target of Republicans. But at the GOP presidential debate in Milwaukee, Carly Fiorina made a particularly strong statement about the law’s ineffectiveness.

Fiorina’s staff did not respond to an inquiry, but during the debate, she listed a number of problems she has with the law.

Fiorina also said that "Obamacare is crushing small businesses, it is not helping the families it was intended to help. So, let us allow states to manage high risk pools. Let us try the one thing in health insurance we've never tried, the free market. Let us ensure that as patients, and customers, that we have information to shop wisely for our health care."

Reasonable arguments can be made against the law and its many provisions. But is no one at all getting any actual help from the law? We decided to take a closer look.

Here are some of the provisions of the law and estimates of how many people have benefited from each. The estimates are from Charles Gaba, who has spent several years crunching the numbers for usage of the law at the blog ACAsignups.net. Gaba’s estimates are current through November 2015 unless noted:

• Americans currently enrolled in policies bought on the ACA’s online exchange: 9.5 million, of which roughly 8 million are receiving subsidies under the law. Another 2.5 million were enrolled in such policies during 2015 but have since dropped their coverage.

• Net number of Americans added to Medicaid due to the law: 15 million. This includes 10 million added through direct expansion of Medicaid under the law, 4 million new but previously eligible beneficiaries who signed up for Medicaid after the ACA passed, and about 1 million transferred to Medicaid from existing, state-based programs.

• Number of young adults age 19 to 26 who have been able to stay on their parents’ insurance due to the law: Possibly 1 million to 3 million, but the numbers change so often it’s hard to get a solid number.

Of the 25 million-plus total from these three categories, Gaba estimates, roughly 17 million are newly insured specifically because of the law -- approximately 5 million through the exchanges, 11 million through Medicaid, and 1 million assorted others.

Here are a couple of more ways people are benefitting:

• Americans no longer at risk for coverage denial due to pre-existing conditions: As PolitiFact has previously reported, between 19 percent and 50 percent of Americans fall into this category, or between 60 million and 160 million people.

• Americans no longer at risk of being kicked off policies for developing expensive medical conditions: Smaller than the previous categories, but unknown.

There is some overlap between these categories. But whatever the number is, it’s in the tens of millions -- and most of those people, Gaba said, "would disagree that it's ‘not helping anyone.’ "

Jonathan Oberlander, a professor in the Department of Health Policy and Management at the University of North Carolina-Chapel Hill, added two additional categories of Americans who have benefited from the ACA:

• Americans with private insurance who now have access to preventive services at no charge: Unknown, but likely in the millions.

Another way to look at it holistically is to gauge the net impact on national uninsurance rates. They have fallen sharply since the law has been put into practice, as this chart from the Kaiser Family Foundation illustrates: 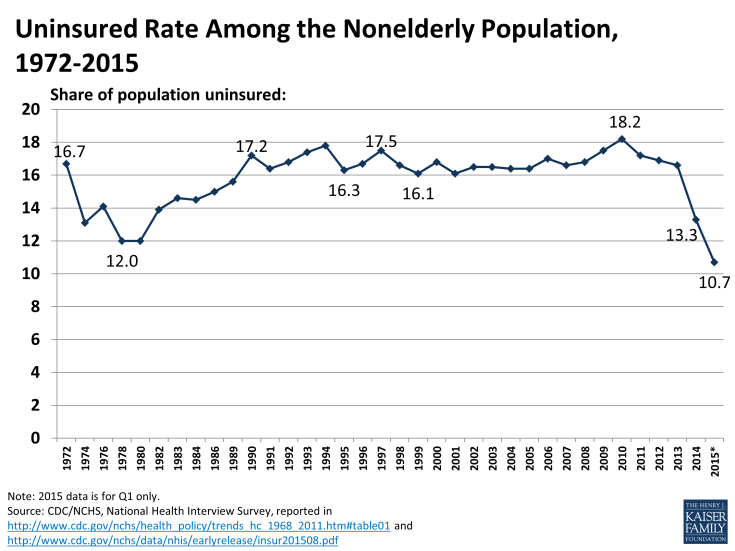 "The statement is utter nonsense. Put simply, it is a wild exaggeration that amounts to a lie," Oberlander said. "You can certainly debate the overall impact and desirability of Obamacare. But to say it isn’t helping anyone is to ignore both reality and overwhelming evidence to the contrary."

Policy experts who have mixed feelings about the law or oppose it outright say that some of these benefits have come at too high a cost, or have left more people significantly hurt than significantly helped.

For instance, Gail Wilensky, who ran Medicare and Medicaid under President George H.W. Bush and who has provided unofficial advice to Jeb Bush’s 2016 presidential campaign, said the law has squeezed out many of the more limited-benefit and catastrophic-coverage plans that beneficiaries may have liked, forcing them to pay for more expensive policies.

Michael Tanner, a scholar at the Cato Institute, said there have been both winners and losers, and that he expects that "the losers far outnumber the winners."

That said, both Wilensky and Tanner agreed that Fiorina went too far in saying that "Obamacare isn't helping anyone."

"People on expanded Medicaid or who were previously uninsured and substantially subsidized in the exchange are better off than they were," Wilensky said, even if "they may or may not be as well off as they could be."

Tanner added that, despite his qualms with the law, "you can’t truthfully say that no one has benefited. Even if you believe that the previously uninsured are paying too much for crummy policies under the ACA, as I do, I don’t think you can say that none of them have benefited at all. That’s a pretty low bar, of course. If you flew across the country dumping money from an airplane, some people would benefit."

Even taking the low end of estimates, tens of millions of Americans have benefited from the ACA, in big ways (such as securing insurance for the first time) or smaller ways (paying less for drugs under Medicare Part D). One does not have to buy into every aspect of the law or feel comfortable with its overall price tag to acknowledge that lots of people have benefited from it. We rate Fiorina’s statement Pants on Fire.

PolitiFact, "Obama says half of Americans have a pre-existing condition," Sept. 27, 2013

Email interview with Jonathan Oberlander, professor in the Department of Health Policy and Management at the University of North Carolina-Chapel Hill, Nov. 11, 2015

Email interview with Michael Tanner, senior fellow at at the Cato Institute, Nov. 11, 2015