Maria Cantwell
stated on January 23, 2019 in a tweet:
"7 million more Americans are uninsured now than when President Trump was elected."

Concern over health insurance helped Democrats take back the House of Representatives in the 2018 elections. And the issue remains a potent one for the party.

In a Jan. 23 tweet, Sen. Maria Cantwell, D-Wash., sent out a image that said, "7 million more Americans are uninsured now than when President Trump was elected."

The percentage of Americans without health insurance is at its highest since 2014, and 7 million more Americans are uninsured now than when President Trump was elected.

We should be working to expand access to affordable #healthcare, not cut it off. pic.twitter.com/aRWCINCjm5

Let’s take a look at the numbers.

In its National Health and Well-Being Index, the survey firm Gallup publishes quarterly data on how many Americans lack health insurance. To arrive at its numbers, the firm surveys approximately 10,000 U.S. adults aged 18 and older each month.

Here’s a chart Gallup put together showing the historical trend for the uninsured rate in recent years: 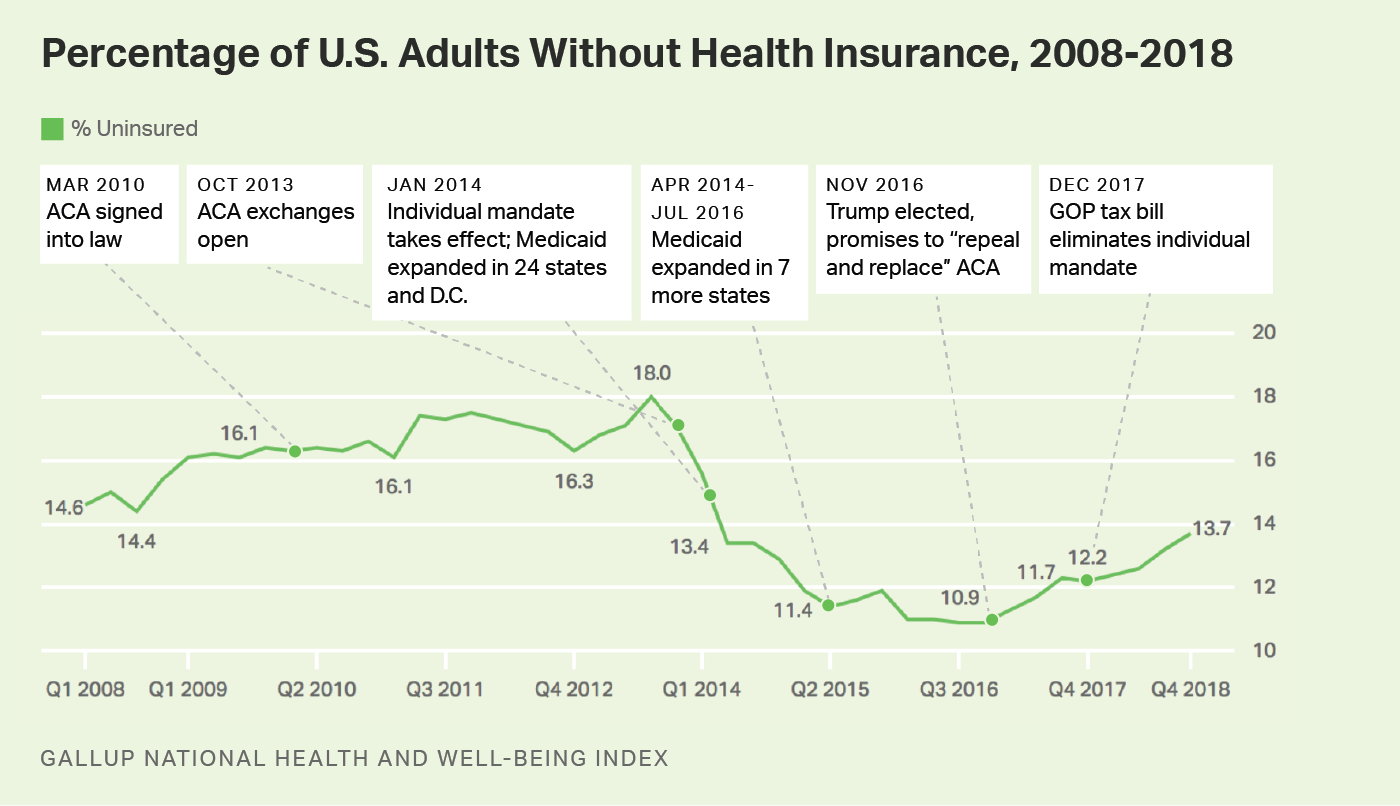 In its release of its findings for the fourth quarter of 2018, Gallup wrote, "Today's level is the highest in more than four years, and well above the low point of 10.9 percent reached in 2016. The 2.8-percentage-point increase since that low represents a net increase of about seven million adults without health insurance."

That parallels what Cantwell tweeted. However, Gallup’s data shows the most extreme rise in the uninsured rate; other data shows relatively little change.

• The Census Bureau’s "Health Insurance Coverage in the United States: 2017" showed an increase of the uninsured of 492,000 people between 2017 and 2016. That’s a rise, but it’s about one-fourteenth as large as the one Cantwell cited.

Here’s the historical trend line for the Census Bureau’s study: 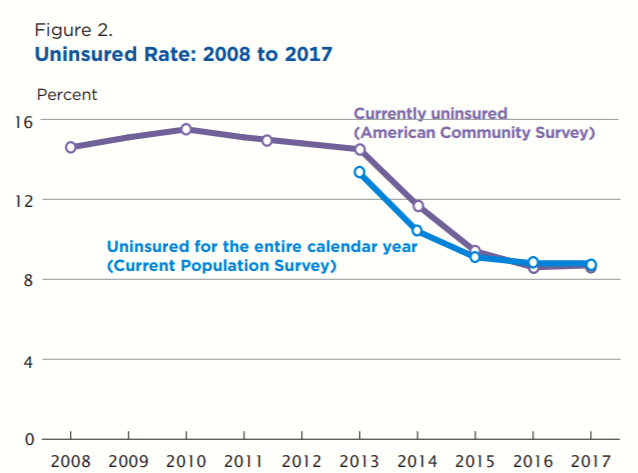 • The National Health Interview Survey, undertaken by the Centers for Disease Control and Prevention, actually found a decline of 300,000 uninsured Americans between 2016 and the first quarter of 2018, if you measure by "uninsured at the time of interview," which is the closest comparison to Gallup’s data.

If you instead use "uninsured for at least part of the past year" -- a different statistic the CDC’s survey collected -- there was essentially no change in the ranks of the uninsured over that period.

Here are the long-term historical figures for the CDC study: 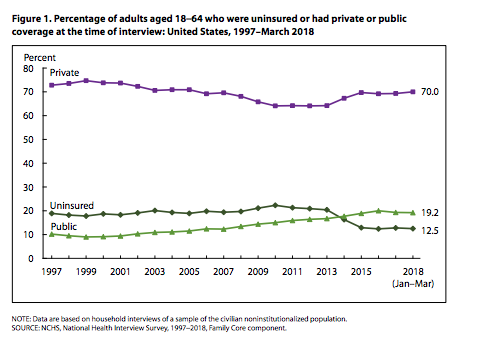 It’s worth noting that the various studies have some differences in methodology.

"Every survey that measures health insurance coverage and the uninsured comes out with somewhat different answers," said Linda Blumberg, a health-policy specialist at the Urban Institute. "They all have different questions, different ordering of questions within the survey, different sample sizes, and different sampling frames."

For instance, the CDC survey doesn’t include adults over 65, whereas Gallup does. Perhaps the most important advantage for the Gallup data is that it includes the most current data of the three -- a factor that Bryan Watt, a spokesman for Cantwell, cited in an interview with PolitiFact

Watt also pointed to another non-governmental survey, undertaken by the Commonwealth Fund, that shows an increase in the uninsured rate since 2016, a finding that’s consistent with what Gallup found. The Commonwealth Fund survey reported that the uninsured rate for non-elderly adults was 12.7 percent in February-April 2016, 14.0 percent in March-June 2017, and 15.5 percent in February-March 2018.

Still, Blumberg said there are reasons to rely on the governmental studies, particularly the one published by the CDC.

"Gallup is more recent, but they also show larger changes than the NHIS in recent years," she said. The CDC study "has a higher response rate, and it has been transparent as to whether any questions or data collection methodology has changed. Given the differences in the way these surveys are measuring changes in the number of uninsured, it’s probably best to acknowledge that and be careful not to draw conclusions too quickly," Blumberg said.

"We will know more when the Census Bureau or the CDC put out updated estimates," she said. "In the meantime, politicians should hold their fire."

The tweet cites one study of health insurance coverage, the one undertaken by Gallup. However, she ignores two closely watched government studies that showed much smaller changes in uninsured Americans, and in one instance, actually found a modest reduction in the number of people without insurance.

Gallup, "How Does the Gallup National Health and Well-Being Index Work?" accessed Jan. 23, 2019