In preparation for Hurricane Dorian, some social media users are sharing posts that claim Disney World is deconstructing Cinderella Castle. But that’s a fairy tale.

One image published Aug. 29 on Facebook purports to show cranes removing a spire from the castle, an iconic site at Disney’s Magic Kingdom in Orlando, Fla.

"BREAKING: Workers have begun removing spires of Cinderella Castle at Magic Kingdom ahead of Hurricane Dorian," reads the photo’s caption.

The post was flagged as part of Facebook’s efforts to combat false news and misinformation on its News Feed. (Read more about our partnership with Facebook.) And it’s been shared hundreds of times by several users, so we wanted to check it out.

Turns out, it’s just another iteration of a long-running hoax about Florida hurricanes.

RELATED: Hurricanes and tropical storms lead to flood of misinformation

Snopes debunked it in October 2017. In its fact-check, Snopes wrote that rumors claiming Cinderella Castle can be partially or fully deconstructed during hurricanes go back as far as 1997, when the Chicago Tribune wrote about them as one of "25 Secrets of the Magic Kingdom."

Viral image
stated on September 28, 2022 in an Instagram post
A news anchor warned that if Hurricane Ian “moves 20 miles to the west … you and everyone you know are dead.”

"According to imagineers involved in its construction, Cinderella Castle was built to code to withstand hurricane-force winds and can in no way be disassembled," the newspaper wrote at the time, without naming any sources.

In a Sept. 4 email to PolitiFact, Disney World said it was not dismantling the castle in preparation for Dorian.

As for the photo we found on Facebook, there’s evidence that it was digitally altered to make it look like a castle spire is being removed by a crane.

Using a reverse image search, we found the exact same photo of Cinderella Castle published on Twitter in the lead-up to Hurricane Michael last year. We also found a very similar image published in a blog post in 2009 — but with the spire intact. The crane in the photo was reportedly being used to remove holiday lights. 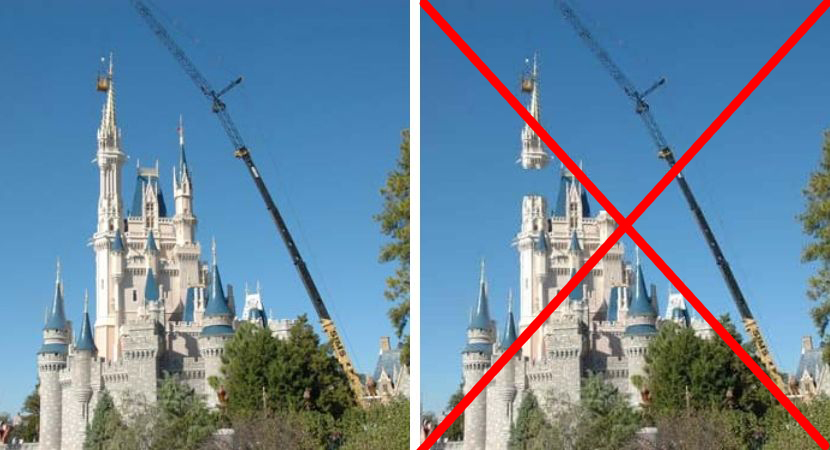 Using FotoForensics, a visual analysis tool, we were able to isolate the manipulation. The tool results indicate that someone cloned part of the blue sky and placed it over part of the castle spire on the left-hand side. The right-hand spire appears to have been removed altogether.

Snopes, "Are the Spires on Disney World’s Cinderella Castle Removable in Case of Hurricane?" Oct. 2, 2017