A related narrative claims Roberts was listed in Epstein’s flight logs, but it also lacks evidence.

The claims falsely connecting Roberts to Epstein, the billionaire who was accused of running a sex trafficking ring before he died in jail, have picked up as supporters of President Donald Trump attack the Supreme Court for rejecting a bid to overturn the election in his favor.

Attorney Lin Wood, who has pushed unfounded claims of voter fraud and has hashtags related to the QAnon conspiracy theory in his Twitter bio, suggested in one of several Dec. 17 tweets that the chief justice was listed on Epstein’s flight logs. Social media users quickly followed suit.

"John Roberts having fun at Epstein’s island!" said another Facebook post, which showed a photo of President Bill Clinton with several other men in an ocean. "He is compromised!"

The posts about Roberts were flagged as part of Facebook’s efforts to combat false news and misinformation on its News Feed. (Read more about our partnership with Facebook.)

In reality, the photograph that social media users say shows Roberts on Epstein’s private island was actually snapped at a Dominican Republic resort in January 2017. The picture shows Clinton with four men. It was featured in Spanish-language news reports from the time.

Other fact-checkers have debunked the same claim, as well as similarly false claims that said photos from the same trip showed Clinton with Epstein and another convicted sex offender.

It’s not clear who the person social media users identified as Roberts actually is. But as the Dispatch noted, photographs from Trump’s inauguration — which also took place in January 2017 — show that Roberts had grayer hair and a bigger bald spot than the man in question. 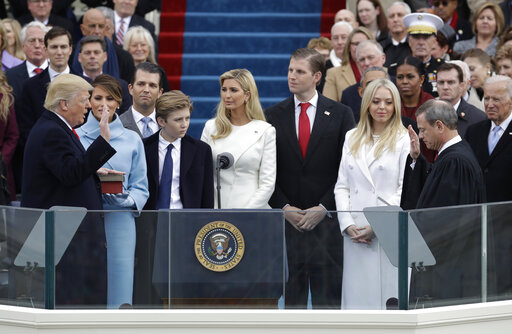 President Donald Trump is sworn in as the 45th president of the United States by Chief Justice John Roberts during the 58th Presidential Inauguration in Washington on Jan. 20, 2017 (AP)

A person by the name of "John Roberts" was listed in 2010 and 2011 entries in the handwritten flight logs kept by Epstein’s pilots. But PolitiFact found no credible evidence that the person named is the chief justice, as opposed to another person by the same name.

Other fact-checkers noted that after the logs came out, Fox News White House correspondent John Roberts also denied any connection to Epstein on Twitter.

PolitiFact searched Google and Nexis and found no credible reports indicating that the chief justice was friends with Epstein. Other fact-checkers reached the same conclusion. We reached out to Wood and the Supreme Court’s public information office, but we did not hear back.

Business Insider, "We compiled every known flight made by Jeffrey Epstein's fleet of private planes. Search them all for the first time," July 6, 2020

Snopes, "Is This a Picture of Bill Clinton with Convicted Sex Offender George Nader?" June 4, 2019

Donald Trump
stated on January 2, 2021 a phone call with the George secretary of state:
After a “major water main break,” Georgia election workers counted “18,000 ballots, all for Biden” that they pulled from suitcases and with no election observers present.

Facebook posts
stated on December 9, 2020 a Facebook post:
An optional microchip for COVID-19 vaccines “would give officials information on who has and has not been vaccinated” and “tracks the location of the patient.”

Laura Ingraham
stated on December 8, 2020 a TV handoff:
"You know what the biggest lie is, is that restaurants are spreaders of COVID. There's no science for that."

Facebook posts
stated on December 3, 2020 Facebook posts:
Video footage from Georgia shows suitcases filled with ballots pulled from under a table and illegally counted after election observers were told to leave.

Bloggers
stated on October 16, 2020 a blog post:
The coronavirus pandemic is “effectively over” in the United Kingdom and “there is absolutely no need for vaccines.”