A viral image purporting to link George Soros to Germany’s Nazi Party is picking up new steam on social media. But the photo of a young man wearing glasses and an SS uniform is not the billionaire Democratic donor, despite what some posts would have you believe.

"I give you George Soros," the text stamped over the image, which was originally posted to Facebook in 2016, says. "A(n) SS in the National Socialist German Workers Party. Nazi Party. He served under Adolf Hitler and Heinrich Himmler."

The post, which has been shared more than 22,000 times, was flagged as part of Facebook’s efforts to combat false news and misinformation on its News Feed. (Read more about our partnership with Facebook.)

We’ve fact-checked a version of the same photo before, as have reporters at Snopes and the Associated Press. The photo isn’t fake or doctored, but it also doesn’t show Soros, despite what the text attached to it says. A quick reverse image search reveals that much.

In reality, the photo is of Oskar Gröning, a former SS soldier who was sentenced to four years in prison in 2015 for being complicit in the murder of 300,000 people during the Holocaust. 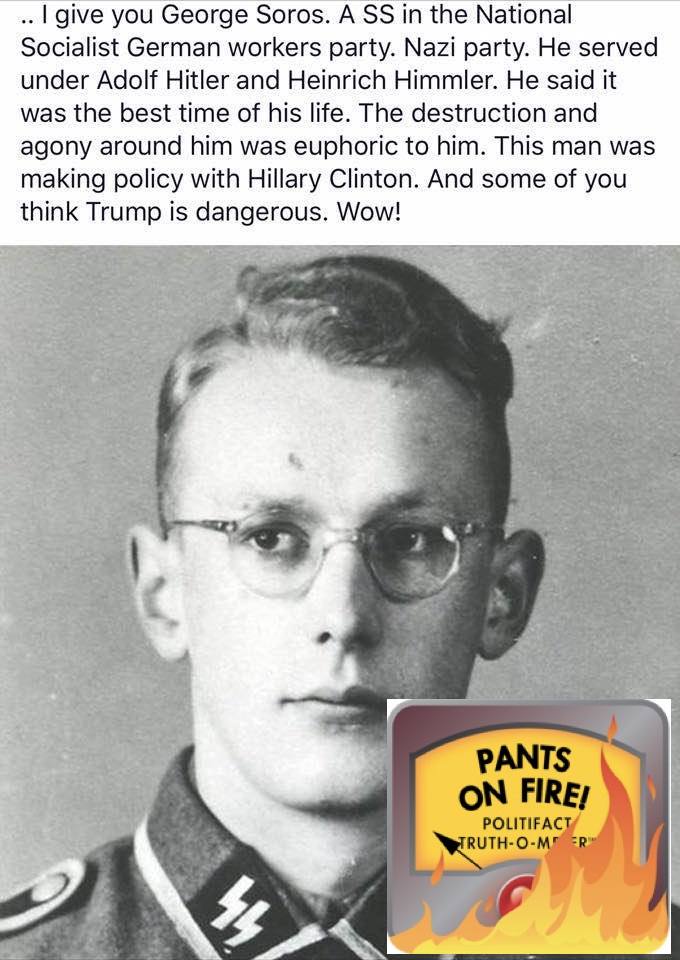 The sentence was handed down when Gröning, who died in 2018, was 94 years old. During the Holocaust, he was a corporal in Hitler’s Waffen SS, according to the New York Times’ obituary.

Soros, on the other hand, survived the Holocaust. When the Nazis invaded Hungary, Soros’ father obtained a false identity for Soros and sent him to live with an agricultural official who passed him off as his Christian godson, according to the New York Times.

The Guardian, "How Nazi guard Oskar Gröning escaped justice in 1947 for crimes at Auschwitz," July 16, 2015

The New York Times, "Former SS Member, on Trial in Germany, Says He Was ‘Morally Complicit’ at Auschwitz," April 21, 2015