President Donald Trump and his Republican allies have attacked former Vice President Joe Biden’s son Hunter for riding his family name to a fortune in Ukraine. But a viral post floating around social media suggests the same charges should be thrown in Trump’s direction.

The picture, a spin-off of a 2016 cartoon showing Trump hoarding bags of cash, tags Trump’s daughter Ivanka, her husband Jared Kushner, and the children of Trump personal lawyer Rudy Giuliani and Attorney General William Barr as benefactors of Trump’s presidency.

The image has been circulating on Facebook and Twitter since at least early December, when the House was moving toward impeaching Trump after a whistleblower complaint sounded alarms about Trump’s efforts to get Ukraine to announce an investigation into the Bidens.

One post from Occupy Democrats, a liberal advocacy group, received over 22,000 likes and more than 23,000 shares on Facebook. Actor John Leguizamo also shared the image.

The posts were flagged as part of Facebook’s efforts to combat potential false news and misinformation on its News Feed. (Read more about our partnership with Facebook.)

We decided to break down the family claims one by one.

Trump, Barr and Giuliani all have family members working in top positions at the White House and other government agencies, according to LinkedIn, news reports and the White House’s latest annual report to Congress on its personnel. Here’s what we found:

• Ivanka Trump, Donald Trump’s daughter, works as an adviser to the president and makes no salary.

• Jared Kushner, Ivanka Trump’s husband, works as an assistant and senior adviser to the president. He also takes no salary.

• Andrew Giuliani, Giuliani’s son, works as a special assistant to the president and associate director of the office of public liaison. He’s paid $95,000 per year.

• Tyler McGaughey, Barr’s son-in-law, works as an associate in the White House counsel’s office with an annual salary of $125,792.

• Mary Daly, Barr’s daughter, works as a senior adviser to the director of the Treasury Department’s financial crimes unit, according to news reports and her LinkedIn profile.

Ivanka Trump and Kushner have had White House roles since the early months of Donald Trump’s presidency, with Ivanka Trump formally occupying her position in March 2017 and Kushner swearing in just days after Trump’s inauguration.

Kushner’s appointment came after the Justice Department wrote a memo concluding that the White House was exempt from violating federal anti-nepotism laws.

Andrew Giuliani, a former Trump campaign volunteer, was first appointed in March 2017, with a starting salary of $77,000, per the White House’s 2017 report. 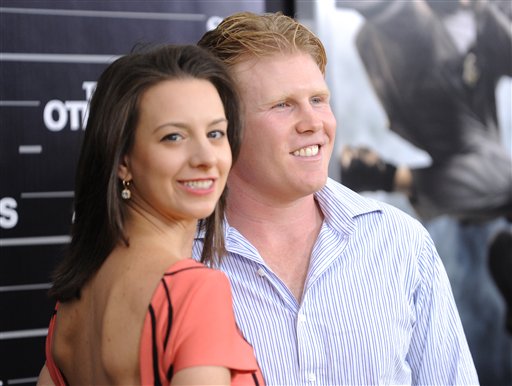 Andrew Giuliani and his former girlfriend, Olympic figure skater Sarah Hughes, at the world premiere of 'The Other Guys' in New York on Monday, Aug. 2, 2010. (AP/Agostini)

McGaughey, who’s married to Barr’s youngest daughter, and Daly, Barr’s oldest daughter, separately transitioned out of Justice Department jobs as Barr awaited Senate confirmation on his nomination to take over as attorney general, according to CNN. 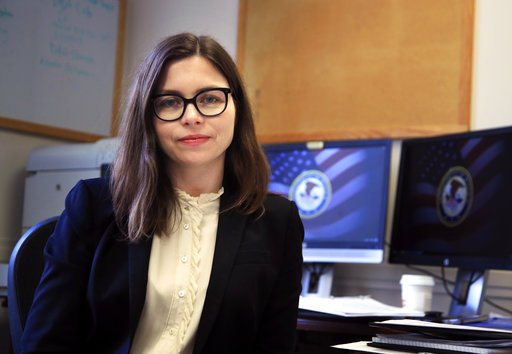 Mary Daly poses for photographs at the Department of Justice in Washington on April 6, 2018. (AP/Ceneta)

Other administrations, including under Presidents George W. Bush and Barack Obama, have seen relatives of high-ranking party leaders and administration officials in government positions.

The image also takes aim at Eric and Donald Trump Jr. for their management of the Trump Organization, as well as at Ivanka Trump for her own business interests.

In October 2019, Eric Trump said, "When my father became commander in chief of this country, we got out of all international business." We rated that claim Pants on Fire.

When Donald Trump became president, he transferred ownership of the Trump Organization to his sons and pledged that "no new deals" would be done during his time in office.

But as we’ve documented, the Trump sons have put almost no stops to their overseas business dealings. They have traveled the globe, managing properties and moving on deals they insist were signed or in-the-works before their father moved into the White House.

Multiple news outlets and accountability groups have kept track of their international activities, and in some cases, the Trump children have publicly celebrated their endeavors.

Congratulations to our extraordinary @TrumpScotland team! Minutes ago, we received full & total approval for a new phase of development to include 500 homes, 50 cottages, sports center, retail & more. We also received approval to build a 2nd golf course! Very proud of them! pic.twitter.com/odVxomGdmf

As for Ivanka Trump, it’s misleading to say she’s "getting Chinese patents and Saudi grants."

The president’s daughter kept her international fashion business going for 18 months after her father’s election before shutting it down. Amid trade talks with China in 2018, she received a number of trademarks from the country related to her products. She added more in 2019, as well.

Trademarks are slightly different from patents. According to the U.S. Patent and Trademark Office, a trademark protects a symbol, logo, design, name or word meant to identify the person or company behind a product, while a patent protects a person or company’s new invention.

In May 2017, Saudi Arabia and the United Arab Emirates announced their pledge to contribute $100 million to a World Bank fund meant to help women entrepreneurs and small-business owners around the world, according to reports. The fund was Ivanka Trump’s idea.

But as Snopes noted, she does not have a hands-on role with the project, nor is she lining her pockets because of it.

The post gets the White House and government positions right, as well as the fact that the Trump sons are still conducting business internationally.

Where it errs is in its portrait of the Saudi grants delivered to the World Bank for a project Ivanka Trump proposed. She does not stand to benefit from them financially.

The Justice Department, "Application of the Anti-Nepotism Statute to a Presidential Appointment in the White House Office," Jan. 20, 2017

PolitiFact, "Eric Trump’s false claim that the Trump family ‘got out of all international business,’" Oct. 18, 2019