President Donald Trump speaks during a campaign rally at the BOK Center on June 20, 2020, in Tulsa, Okla. (AP/Vucci)

That’s a far cry from the 19,000 people the city’s BOK Center can fit, and an even farther cry from the 1 million people who the Trump campaign said registered to attend. The campaign hyped the rally as a major event with an expected overflow crowd big enough to cheer on a second speech outside the arena, but organizers canceled the second address when that crowd didn’t materialize.

Reporters on site shared photos and videos of empty blue seats and a comparatively sparse crowd, while critics jeered Trump on social media and joked about TikTok users who registered for tickets with no intention of showing.

Now, supporters of the president are defending him by flooding social media with photos that they say show a nearly sold-out arena in Tulsa.

One Facebook post shows a packed arena from the vantage point of two people sitting in the venue’s upper deck. A man in the photo is wearing a Trump campaign shirt. "Stadium in Tulsa Trump rally yesterday," the caption on the June 21 post says.

That’s because this photo was taken at a different Trump rally. As some social media users pointed out in the comments, the arena and stage in the photo are set up differently than the BOK Center in Tulsa, where Trump’s June 20 rally took place. 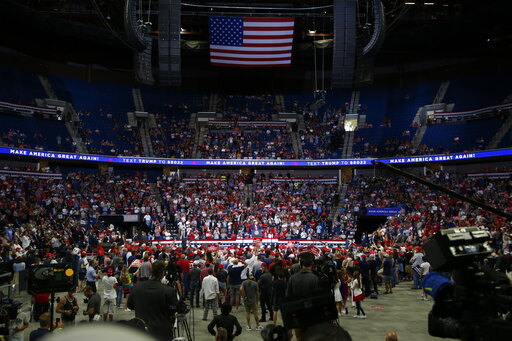 President Donald Trump speaks during a campaign rally at the BOK Center on June 20, 2020, in Tulsa, Okla. (AP/Ogrocki)

There are other visible differences, too. 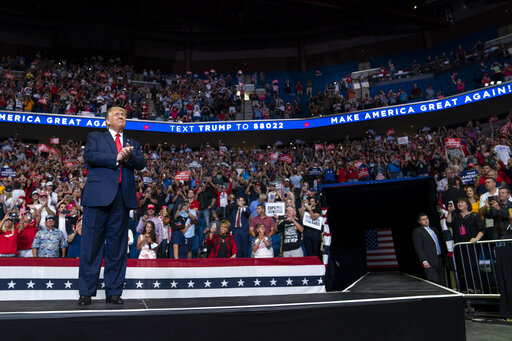 President Donald Trump arrives on the ramp to the stage at a campaign rally at the BOK Center on June 20, 2020, in Tulsa, Okla. (AP/Vucci)

It’s hard to say which rally the Facebook photo is from. We turned up no results when we ran the photo through reverse image searches on Google, TinEye and Yandex. The account that posted the image did not respond to a request for comment sent via Facebook Messenger.

The stage setup in the photo resembles the setup from Trump’s June 2019 rally at the Amway Center in Orlando, Fla. The Facebook user who uploaded the photo also shared posts about the Orlando rally after it happened, including a post from conservative political commentator Glenn Beck that showed what appears to be the same stadium, and from a similar vantage point.