Tweets
stated on November 3, 2020 in a tweet:
A poll worker in Erie County, Pa., threw out over 100 ballots for Donald Trump.

The claim originated with an Instagram user who said they were a poll worker and wrote, "I’ve thrown out over a hundred ballots for Trump already!" The Instagram story was screenshotted and spread widely on Twitter by Mike Coudrey, a self-described activist and entrepreneur.

"Poll worker in Erie County, PA … admitted on Instagram that he has thrown out over 100 pro-Trump ballots," Coudrey wrote in the Nov. 3 tweet, which has since been deleted but was shared widely, including by prominent conservative commentators such as Dinesh D’Souza. 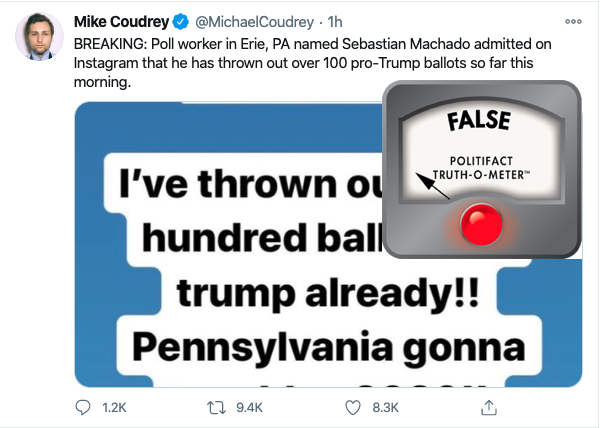 A screenshot of Mike Coudrey's tweet about an Instagram story from a user claiming to be a poll worker in Erie County, Pa.

Another tweet sharing a screenshot of the Instagram story was retweeted by the Trump campaign, fact-checkers at the Dispatch noted. That Twitter user later made a correction.

Similar screenshots have also surfaced in widespread posts on Facebook, where they were flagged as part of Facebook’s efforts to combat false news and misinformation on its News Feed. (Read more about our partnership with Facebook.)

The alleged admission of ballot tossing did not actually come from a poll worker, however.

"The person making the statements does not work in any way with Erie County or have any part of Erie County’s election process," Anderson wrote, "In fact, the individual is not a registered voter and is not believed to be a resident of Erie County."

A spokesperson for Erie County confirmed to PolitiFact that the statement was in reference to the Instagram story in question. Other reporters and fact-checkers have since noted that the viral Instagram story was a hoax, and that claims about it were inaccurate.

Coudrey told PolitiFact in a Twitter message that he had seen that the county issued its official statement saying the Instagram user was not a poll worker. He also noted that the county’s statement said authorities are investigating the incident for potential criminal charges.

Overall, the claim that an Erie County poll worker threw out over 100 ballots for Trump is based on an Instagram story from a person unaffiliated with the county. It has since been debunked.

Courtney Holland on Twitter, accessed via the Internet Archive Nov. 3, 2020

The Dispatch, "Did a Poll Worker in Pennsylvania Throw Away Trump Ballots?" Nov. 3, 2020