Matt Schlapp
stated on November 8, 2020 in a Fox News appearance:
As an example of voter fraud, “we have literally 9,000 people who voted in this election (in Nevada) who don’t live in Nevada.”

Matt Schlapp, chairman of the American Conservative Union, speaks during a news conference in front of the Clark County Election Department on Nov. 5, 2020, in Las Vegas. (AP/Locher)

As supporters of President Donald Trump ramp up their efforts to delegitimize the election with unsubstantiated allegations of widespread voter fraud, one high-profile Republican ally claimed that 9,000 Nevada ballots were fraudulently cast by nonresidents.

"We have literally 9,000 people who voted in this election who don’t live in Nevada," American Conservative Union chair Matt Schlapp told Fox News on Nov. 8, wrongly claiming the election has seen widespread "fraud" and "illegality" but offering no proof to support his allegations.

Schlapp also cited the 9,000 figure during a press conference the same day, telling a crowd of Trump supporters that many "non-Nevadans" had been caught illegally voting in the state.

Schlapp’s allegation earned a shoutout from Trump, who tweeted that Nevada was "a cesspool of fake votes." Schlapp has continued repeating the claim since.

Nevada is turning out to be a cesspool of Fake Votes. @mschlapp & @AdamLaxalt are finding things that, when released, will be absolutely shocking!

But there is no proof that 9,000 people cast illegal ballots in Nevada after moving out of state, and there remains no evidence of any widespread voter fraud in Nevada or elsewhere.

President-elect Joe Biden led Trump by more than 36,000 votes in Nevada as of this writing.

Schlapp’s claim is derived from a Trump campaign list

Schlapp’s 9,000 number derives in part from another unproven claim from the Trump campaign and Republicans in Nevada, who argued days earlier that there were 3,062 instances of voter fraud stemming from cases in which people moved out of Nevada but still voted in the state.

The campaign’s list showed ZIP codes for voters’ current and previous addresses, but it left out other personally identifying information. The lawyers said they formed it by cross-referencing the list of general election voters in Nevada with publicly available change-of-address records.

But the list alone did not prove that anyone had violated the law, as we reported.

That’s because people who move within 30 days before an election can legally cast a ballot in their new state — or in their prior state of residence — in-person or via absentee ballot. Nevadans who leave the state to attend college or other reasons can also request a ballot.

The list from Trump’s lawyers also included addresses for Americans serving overseas in the military and their spouses, including some people who have since spoken out.

The ACLU of Nevada said the list showed changes of address for people who moved to military bases, including at least 129 Army or Air Post Office addresses, 13 Fleet Post Offices and 15 Diplomatic Post Offices, according to the Wall Street Journal. There are other addresses on the list, the Journal reported, that the ACLU said are located in cities near military hubs.

"This list they’re talking about has been debunked as having, for example, having military personnel on there who are serving overseas and have the right to vote," Nevada Attorney General Aaron Ford, a Democrat, said on Fox News Nov. 7. "It could include Mormon missionaries on that list. It could also include college students on that list."

Any registered voter in Nevada could request to vote by mail in 2020, according to the website for the Nevada secretary of state.

Clark County, which includes Las Vegas and nearly 75% of Nevada’s population, has so far referred just three cases of potential fraud to the Nevada secretary of state’s office, said county spokesperson Dan Kulin. None of the three cases involved an ineligible voter from out of state. 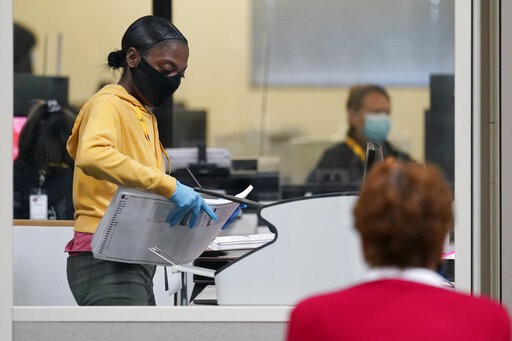 A county election worker scans mail-in ballots at a tabulating area as an observer watches at the Clark County Election Department on Nov. 5, 2020, in Las Vegas. (AP)

Schlapp does not have hard evidence to support his claim

His number relies on back-of-the-envelope math and some major assumptions, including the assumption that everyone who mailed in a ballot was ineligible to do so. There are no signs of a new, bigger list that includes 9,000 changes of address or voter names.

An American Conservative Union spokesperson said Schlapp had projected that the number of people who illegally voted from outside Nevada was actually three times as large as the 3,062 people originally alleged. The spokesperson said that’s because only one-third of people report changes of address to the national database maintained by the U.S. Postal Service.

"The 3,000 that we came up with, we believe that that is two-thirds shy of the actual number because most people don’t go to the post office to change their address," Schlapp said in a Nov. 9 interview with former White House press secretary Sean Spicer.

But Martha Johnson, a spokesperson for the Postal Service, said the service was "unable to confirm" that only one-third of people report when they change their address. "The USPS processed approximately 36 million change of addresses" in 2020, Johnson said.

Schlapp has not backed his claims up with any hard evidence. Even if 9,000 absentee voters did mail in ballots to Nevada from out of state, there’s no proof any of them did so illegally, as he claimed.

A spokesperson for Nevada Secretary of State Barbara Cegavske, a Republican, declined to comment on Schlapp’s specific claims but pointed to a statement. It said Nevada is investigating all credible allegations of fraud but noted that "many voter fraud complaints lack any evidence."

Nevada law does allow the residency of registered voters to be challenged, including for people who have moved, the Nevada Independent reported. But that law would have required that an affidavit be filed by the challenger with the county clerk in advance of the election.

Schlapp claimed that as an example of voter fraud, "we have literally 9,000 people who voted in this election (in Nevada) who don’t live in Nevada."

Schlapp has acknowledged that his 9,000 figure is not a literal count of illegal out-of-state voters. It is a speculative estimate he came up with based on a list of 3,062 individuals produced by the Trump campaign — a list that had its own problems.

The original list included military personnel in its count and did not establish that any of the people it identified were actually ineligible to vote in Nevada. The burden of proof is on the speaker, and Schlapp has provided no credible evidence to substantiate his claim.

The Washington Post, "Here are the GOP and Trump campaign’s allegations of election irregularities. So far, none has been proved," Nov. 8, 2020

Time, "Here Are All the Lawsuits the Trump Campaign Has Filed Since Election Day—And Why Most Are Unlikely to Go Anywhere," Nov. 7, 2020

Email and phone correspondence with the American Conservative Union, Nov. 10, 2020