Joe Biden
stated on October 10, 2020 in a comment to reporters:
Senate Republicans' move to confirm Judge Amy Coney Barrett to the Supreme Court in an election year is "not constitutional."

Asked whether he would consider adding justices to the Supreme Court if elected, Democratic presidential nominee Joe Biden claimed Senate Republicans’ move to install Judge Amy Coney Barrett to the vacant seat less than a month before Election Day was "not constitutional."

"Look, the only court packing is going on right now," Biden told reporters Oct. 10. "It's going on with the Republicans packing the court now. It's not constitutional what they're doing."

Joe Biden: "The only court packing is going on right now -- it's going on with Republicans packing the court now. It's not constitutional." pic.twitter.com/nSySmeVdkv

The rush to replace the late Justice Ruth Bader Ginsburg, who died in September, is a departure from the GOP’s position in 2016, when the Republican-led Senate blocked President Barack Obama’s nomination of Judge Merrick Garland months before that year’s election.

Biden, the former vice president who served two terms with Obama, has argued that the winner of the Nov. 3 presidential election should pick the next nominee.

The term "court packing" — a phrase that invokes President Franklin D. Roosevelt’s 1937 proposal to expand the size of the Supreme Court — means increasing the number of justices on the court. Doing that would require legislation, and Biden has not said whether he’d consider it as president. But Republicans are not currently pursuing that.

As for the move to seat Barrett before the election, two constitutional scholars said that in a general sense, the Senate Republicans’ actions seem at odds with some of the democratic principles underlying the Constitution.

But the Republicans’ move to add Barrett to the bench with a fast-paced confirmation process is not a violation of any specific clause in the Constitution, legal experts agreed.

"In the modern era, whether to proceed on a nomination during (or after) an election year is wholly a matter of politics," Prakash said.

No specific clause in the Constitution outlaws this moment

Article II of the Constitution says that the president "shall nominate, and by and with the advice and consent of the Senate, shall appoint … judges of the Supreme Court."

The Constitution doesn’t spell out procedures for nominating justices, nor does it require that the high court stay at a certain size. The number of seats on the Supreme Court is determined by legislation and has changed over the years. It has been set at nine justices since 1869.

A handful of historical precedents and informal rules have been cited for the handling of election-year Supreme Court nominations, but they carry no official force. 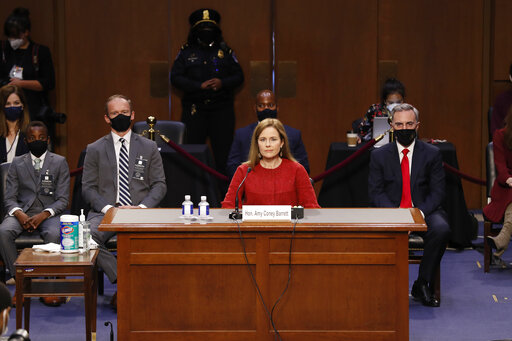 "If ‘unconstitutional’ means that a court would find what the Republicans are doing to be inconsistent with the Constitution, the answer is no, no court would make such a holding," added Mark Tushnet, a professor of law emeritus at Harvard Law School.

The Biden campaign says he was talking about constitutional principles

Biden did not elaborate on his claim when he made it. He previously accused Republicans of "denying the American people the one shot they have, under constitutional law, to be able to have their input," according to the Associated Press.

Kate Bedingfield, Biden’s deputy campaign manager, made a similar point when CNN’ Jake Tapper pressed her on Biden’s claim about the Republicans’ move being "not constitutional."

"Ramming through this nomination after millions of Americans have already voted is contemptuous of the essential democratic structure that is the bedrock of the Constitution," said Andrew Bates, the Biden campaign’s director of rapid response, in a statement to PolitiFact.

Laurence Tribe, a professor emeritus of constitutional law at Harvard University and a fierce critic of the Trump administration on Twitter, argued that Senate Republicans have run afoul of basic constitutional principles, even if there’s no specific clause to condemn their actions.

"There is no anti-hypocrisy clause in the Constitution, but the hypocritical use of constitutional powers can undermine the presuppositions of a constitutional system," Tribe said.

A fast-tracked confirmation battle so close to the election, for example, isn’t honoring the principle requiring the consent of the governed, Tribe said. And the Senate’s race to fill the newly vacant seat is an abdication of its duty to give meaningful advice and consent.

"This Senate is committed right now under the leadership of (Senate Majority Leader Mitch) McConnell not to give its advice and consent, but to give its rubber stamp," Tribe said.

Tushnet, also from Harvard, said that while no court of law would strike down the course of action Republicans are charting, "what they are doing is inconsistent with what some people reasonably view as fundamental principles underlying the constitutional order" — namely, the idea that "the political system should operate over time to ensure that overall, all of our institutions are roughly in line with what the American people want."

Still, what they’re doing is not expressly prohibited by the language of the Constitution.

The requirement for the Senate to give its advice and consent "is a political prerogative that duly elected senators can determine how to exercise," Shapiro said.

Biden said Senate Republicans’ move to confirm Barrett to the Supreme Court in an election year is "not constitutional."

Email interview with Ilya Shapiro, director of the Robert A. Levy Center for Constitutional Studies at the Cato Institute and publisher of the Cato Supreme Court Review, Oct. 12, 2020

Email interview with Saikrishna Prakash, professor of law at the University of Virginia School of Law, Oct. 12, 2020