Left Action
stated on October 20, 2020 in a Facebook post:
“Hunter Biden was chairman of the World Food Program, which just won the Nobel Peace Prize. Eric Trump, Donald J Trump Jr, Ivanka Trump are banned from ever operating a charity again because they stole donations to children with cancer."

A popular liberal Facebook page is pushing back against attacks on Hunter Biden with uncharitable claims about the children of President Donald Trump.

"Hunter Biden was chairman of the World Food Program, which just won the Nobel Peace Prize," Left Action said in an Oct. 20 post. "Eric Trump, Donald J Trump Jr, Ivanka Trump are banned from ever operating a charity again because they stole donations to children with cancer."

The post was flagged as part of Facebook’s efforts to combat false news and misinformation on its News Feed. (Read more about our partnership with Facebook.) It’s been shared more than 5,200 times.

Left Action is a popular Facebook page that’s part of a series of online liberal advocacy properties called the Left Action Network. We reached out to the page for evidence to back up its post, but we haven’t heard back.

We’ve previously fact-checked claims about the Trump children being disallowed from operating charities, but we wanted to take a fresh look at the facts.

The Facebook post is wrong to say that the Trump children aren’t allowed to operate charities, and it paints a misleading picture of Hunter Biden’s connection to a nonprofit that fights global hunger. 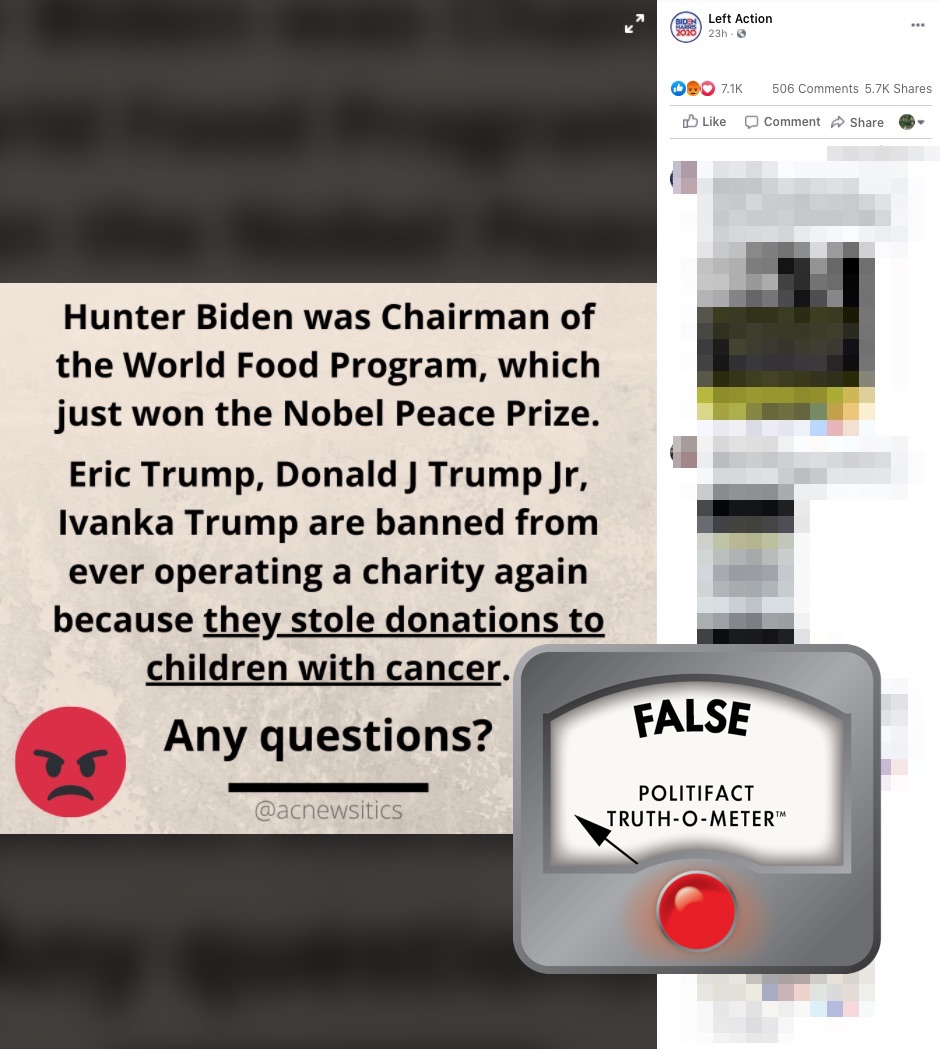 World Food Program USA is a 501(c)(3) charity based in Washington, D.C. Its mission is to support the World Food Programme, a United Nations-affiliated humanitarian organization that delivers food assistance in dozens of countries around the world.

The World Food Programme won the 2020 Nobel Peace Prize — not World Food Program USA. While the two organizations share a common mission, and the U.S. group frequently donates to the international one, they are separate entities, as evidenced by public tax records.

Hunter Biden, son of Democratic presidential nominee Joe Biden, was on the World Food Program USA board of directors from 2011 to 2017 and served as chairman from 2011 to 2015, according to the nonprofit’s annual reports. Randy Russell is the current chairman.

So Hunter Biden is not a former chairman of a Nobel Prize-winning humanitarian organization, as the Facebook post claims. But what about the Trump children?

We reached out to the White House and Trump’s re-election campaign for more information. A spokesperson for the campaign pointed to an October 2019 PolitiFact fact-check about a Facebook post that claimed the Trumps were "disallowed from operating any charity in the State of New York because they stole from a kids cancer charity."

In June 2018, the New York attorney general filed a lawsuit against the president and three of his children: Donald Trump Jr., Ivanka Trump and Eric Trump. The Donald J. Trump Foundation, whose board the Trump children served on, was also named in the lawsuit.

The suit claimed that for more than a decade, the foundation violated state and federal laws related to charities in New York state. As a result, it sought to dissolve the foundation and to temporarily prohibit the Trumps from future service as officers or directors in New York charitable organizations.

In November 2019, New York Attorney General Letitia James announced a settlement under which the state Supreme Court ordered the president to pay $2 million "for improperly using charitable assets to intervene in the 2016 presidential primaries and further his own political interests." The settlement also required training for the three Trump children and imposed restrictions on the president if and when he joined another charity as director.

The lawsuit had nothing to do with a charity for children with cancer, as the Facebook post claims.

Forbes reported in June 2017 that Eric Trump’s own foundation gave donors the impression that all the money it raised at an annual golf event went to St. Jude Children’s Research Hospital, when in reality more than $500,000 went to other causes. Eric Trump resigned from the foundation in December 2016.

That scrutiny was separate from the New York attorney general’s lawsuit against Donald J. Trump Foundation, which agreed to dissolve in 2018. And Donald Trump Jr., Ivanka Trump, and Eric Trump can still operate charities under the terms of the settlement.

The Washington Post, "Trump agrees to shut down his charity amid allegations that he used it for personal and political benefit," Dec. 18, 2018