Donald Trump
stated on October 24, 2020 in a campaign rally:
"We have a mayor in D.C. who formed a commission with recommendations. Her recommendation is: Take down the Washington Monument, close up the Lincoln Monument."

"We have a mayor in D.C. who formed a commission with recommendations," Trump said Oct. 24 in Circleville, Ohio. "Her recommendation is: Take down the Washington Monument, close up the Lincoln Monument. No, no. These are serious. You read about it."

Trump’s comment mischaracterized the recommendations of a city commission that spent the summer reviewing the namesakes of more than 1,300 schools, buildings, parks, streets, public spaces and monuments throughout the nation’s capital.

The working group suggested that the city rename a number of its properties, often because of the namesakes’ connections to slavery, systemic racism or other forms of social injustice. It also called on Bowser to urge the federal government to "remove, relocate or contextualize'' eight federal statues and memorials, including the Washington Monument.

But Bowser never recommended that the city "take down" the Washington Monument or "close up" the Lincoln Memorial. The Lincoln Memorial was never mentioned in the commission’s report, which has since been edited to remove the recommendations for federal properties.

Situated on the National Mall, both the Washington Monument and the Lincoln Memorial are on federal land, putting them outside of the control of Bowser or the city government. Renaming them would require action from Congress, according to DCist.

The mayor’s office and Trump campaign did not respond to requests for comment.

Bowser convened the working group in July following unrest in Washington and elsewhere over the May police killing of George Floyd, a Black man from Minneapolis.

The purpose of the commission, Bowser said on Twitter, was to ensure that the legacies of people honored with their names on buildings or other public spaces were consistent with the city’s values. In a 24-page report published in September, the commission laid out whether certain city-owned facilities should be "removed, renamed or contextualized."

The group looked primarily at whether the namesakes had "key disqualifying histories," such as participation in slavery, systemic racism or the mistreatment of minority groups. It suggested that the city rename 21 of its public schools; nine of its residential buildings and campuses; 12 of its parks, fields and playgrounds; and seven of its government buildings.

Relevant to Trump’s claim, the commission also recommended that Bowser use her position on the National Capital Memorial Advisory Commission to lobby the federal government to "remove, relocate or contextualize" eight federal properties.

The report did not specify what it was recommending for each of the properties listed, which included iconic landmarks such as the Jefferson Memorial and Washington Monument, both named for former presidents who enslaved people.

But the rollout of the report was met with criticism from the White House and the president’s allies, some of whom misrepresented the report’s intentions as calling for the removal of the Washington Monument, according to the Washington Post.

To address the confusion, Bowser had the report shortened by a page, removing the page related to federal properties. LaToya Foster, a spokesperson for Bowser’s office, told the Washington Post the commission’s proposal for the federal properties was "contextualizing, not removing."

"Mayor Bowser has asked the (committee) to clarify and refine their recommendations to focus on local D.C.," Foster said, according to the Washington Post. 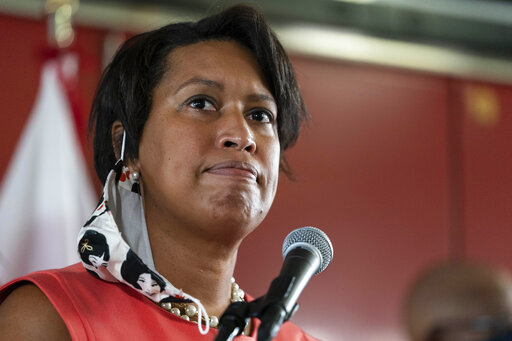 "My expectation of the report was that it would not include any recommendations on federal buildings," Bowser said in a Sept. 3 press conference. "When I saw the final report, and I could see immediately how its recommendations could be easily misconstrued or purposely misconstrued, so we removed it."

Trump said, "We have a mayor in D.C. who formed a commission with recommendations. Her recommendation is: Take down the Washington Monument, close up the Lincoln Monument. No, no. These are serious."

Bowser has not petitioned for tearing down the Washington Monument or Lincoln Memorial.

A report from a working group she established in July did urge her to encourage the federal government to "remove, relocate or contextualize" the Washington Monument, not the Lincoln Memorial. But the mayor had the references to federal monuments deleted from the report, and her office quickly clarified that the commission’s call was for "contextualizing, not removing."

DCist, "Dozens Of D.C. Sites Could Get Renamed Or Removed Due To Ties With Slavery And Racism," Sept. 1, 2020