The rapper DMX, born Earl Simmons, performs during the BET Hip Hop Awards in Atlanta on Oct. 1, 2011. He died April 9 at the age of 50 in a hospital in White Plains, New York. (AP/Goldman)

DMX, the raspy-voiced rapper behind several hip-hop anthems such as "X Gon Give It to Ya" and "Party Up (Up In Here)," died April 9 at a hospital in New York, where he had been on life support after suffering a heart attack days earlier. The rapper, born Earl Simmons, was 50.

The hospital where DMX died said in a statement that he died "peacefully with family present after suffering a catastrophic cardiac arrest."

It is not clear what preceded the rapper’s heart attack. But in the days surrounding DMX’s death, social media users circulated posts suggesting that the rapper died days after getting vaccinated against COVID-19. The implication: the vaccine made his heart fail. 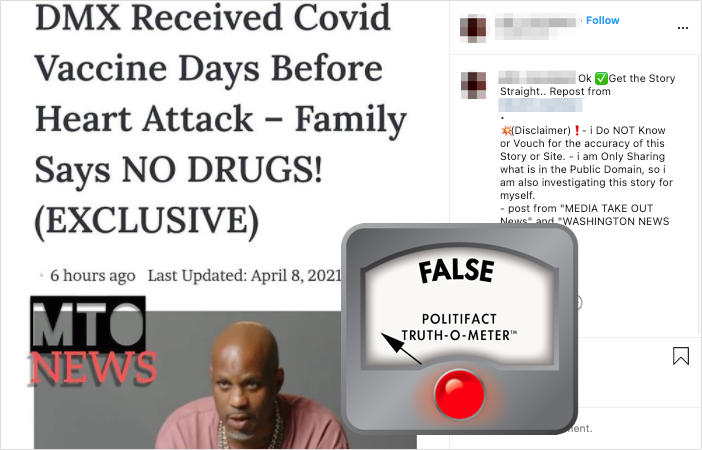 The source of the viral headline was MTO News, a gossip news site. One day before DMX died, the site quoted an unnamed family member as saying that DMX got his COVID-19 shot once he became eligible to receive it "so that he could go travel and perform, stuff like that."

PolitiFact could not verify the accuracy of the quotes or whether DMX was recently vaccinated before he died, as the headline claimed. MTO News did not respond to a request for comment, and our inquiries to DMX’s manager also went unanswered.

But Murray Richman, DMX’s longtime attorney, told PolitiFact that the rap icon did not die of COVID-19 or because of a COVID-19 vaccine.

"Earl Simmons did not die of COVID or a COVID vaccine," Richman said. "Earl Simmons died of a heart attack, spurred on by I don’t know what, but certainly not COVID or the vaccine."

The MTO News article does not provide proof that DMX died because he received the COVID-19 vaccine. The statements from his family and the hospital did not mention a vaccine, and Richman had told several news outlets that he was not sure what caused the heart attack even before the MTO News article published. (He was responding to a tabloid report that said DMX had suffered a drug overdose.)

"You can get a COVID vaccine and still die from something else," said Paul Offit, director of the Vaccine Education Center at the Children’s Hospital of Philadelphia.

MTO News "frequently publishes unsubstantiated claims based on unclear sourcing," according to NewsGuard, a service that reviews and rates news and information sites according to nine basic journalistic criteria. NewsGuard identified several articles on MTO News that made false claims about celebrities’ sexual orientation and gender identity, as well as articles that embedded a doctored video about former President Donald Trump’s hair.

The claim about DMX mirrors other social media posts that wrongly blamed COVID-19 vaccines for the deaths of other celebrities, such as baseball legend Hank Aaron. Aaron died after receiving his vaccine, but not because of it, we found.

The U.S. administered over 167 million COVID-19 vaccine doses between Dec. 14, 2020, and April 5, according to the Centers for Disease Control and Prevention, and the CDC’s vaccine safety surveillance program received 2,794 reports of death, affecting 0.00167% of recipients.

The agency wrote that after reviewing death certificates as well as autopsy and medical records for those people, it found "no evidence that vaccination contributed to patient deaths."

The rumor can be sourced to a website that purported to quote an unnamed family member. Statements from the rapper’s family and the hospital that kept him on life support after a heart attack did not mention the coronavirus or a COVID-19 vaccine.

DMX’s attorney told PolitiFact that the rapper did not die because of the COVID-19 vaccine.

Because this claim lacks supporting evidence, we rate it False.

UPDATE, April 15, 2021: This fact-check was updated to reflect comments from Murray Richman, DMX’s attorney, confirming that the rapper did not die from a COVID-19 vaccine. Our ruling remains the same.

Email interview with Paul A. Offit, director of the Vaccine Education Center at the Children’s Hospital of Philadelphia and chair of vaccinology at the University of Pennsylvania’s Perelman School of Medicine, April 12, 2021