Jeff Jackson
stated on April 8, 2021 in a tweet:
On whether he supports the filibuster.

A Democratic candidate for U.S. Senate has already changed positions on a key issue, according to a wing of the Republican establishment.

Jeff Jackson, a state senator from Charlotte, is one of several Democrats running for the seat that Republican U.S. Sen. Richard Burr will vacate in 2022.

The National Republican Senatorial Committee said in an April 12 press release that one of Jackson’s recent tweets reveals he has changed his view on the filibuster. The filibuster, a loosely-defined term, generally refers to a rule allowing a minority of senators — even just one — to hold up legislation, effectively requiring 60 votes for a motion to end debate.

It’s a hot topic because Democrats control the White House and Congress, but their majority is so narrow that a filibuster can effectively block any major legislation they promised on the campaign trail.

The group credited Jackson’s alleged change of mind to pressure he received from one of his Democrat challengers, former state Sen. Erica Smith.

"Erica Smith gets Jeff Jackson to flip-flop on the filibuster in under a month," the NRSC declared.

Consistency is a trait many voters look for in a candidate. So PolitiFact takes the term "flip-flop" seriously. In fact, we have our own Flip-O-Meter to help measure how much someone’s position has changed.

Most recently, we ruled that Republican Amanda Chase did a Half Flip when she added a caveat to her pledge not to run as an independent in this year’s Virginia governor’s race if she did not win her party’s nomination. In North Carolina, we ruled in October that U.S. Sen. Thom Tillis did a Full Flop when he decided to support a U.S. Supreme Court justice nominee in an election year.

PolitiFact has also put multiple claims about the filibuster through the Flip-O-Meter.

So, how much has Jackson changed his position on the filibuster?

We asked the NRSC for evidence showing that Jackson once supported the filibuster but now opposes it. Committee spokesman T.W. Arrighi pointed to two instances.

"I think the survival of the filibuster is completely dependent on whether or not [Senate Minority Leader] Mitch McConnell chooses to act in a responsible way. If he chooses to treat that in any manner remotely resembling what he did with it the last time he had the opportunity and just bring everything to a halt, it’s gone. I think it's hanging by a thread right now, and I think that's the best case you can make for it."

In other words, Jackson said his support for the filibuster was dependent on McConnell’s actions.

On April 8, Jackson posted three consecutive tweets in response to a Washington Post story about the decision by Democratic Sen. Joe Machin of West Virginia to support the filibuster. Jackson tweeted: 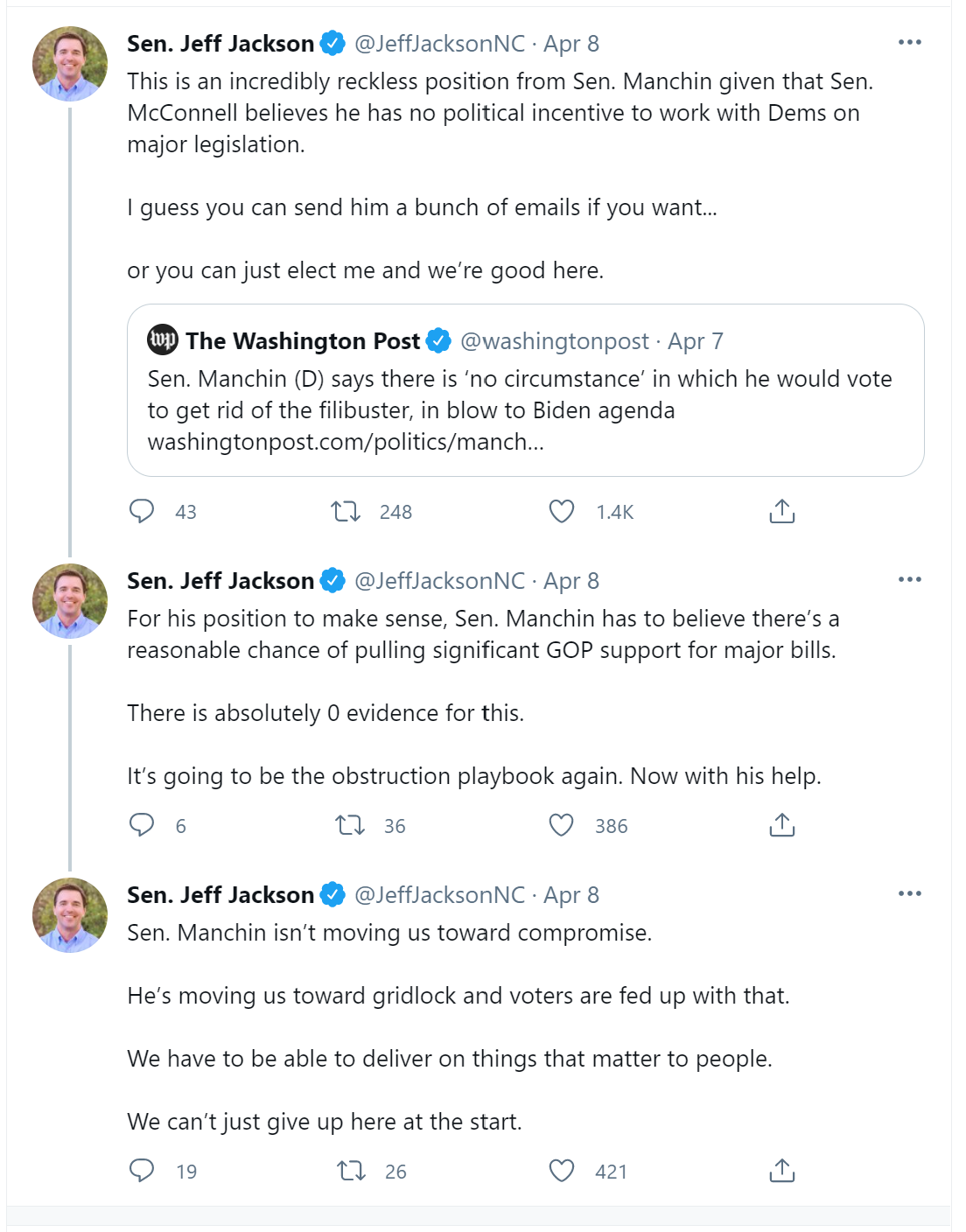 "This is an incredibly reckless position from Sen. Manchin, given that Sen. McConnell believes he has no political incentive to work with Dems on major legislation. I guess you can send him a bunch of emails if you want ... or you can just elect me and we’re good here.

"For his position to make sense, Sen. Manchin has to believe there’s a reasonable chance of pulling significant GOP support for major bills. There is absolutely 0 evidence for this. It’s going to be the obstruction playbook again. Now with his help.

"Sen. Manchin isn’t moving us toward compromise. He’s moving us toward gridlock, and voters are fed up with that. We have to be able to deliver on things that matter to people. We can’t just give up here at the start."

Where does Erica Smith come in?

The NRSC’s release suggests that Jackson spoke out about the filibuster because Politico in March compared his "filibuster skeptical" position to Smith’s belief that it should be abolished. Politico reported that Jackson "did not outright endorse getting rid of the 60-vote threshold but said it should not be a roadblock to passing legislation on voting rights."

As for his tweets, Jackson says he’s frustrated by Manchin’s position. He says Manchin is either wrongfully giving the Republican leader the benefit of the doubt, or he’s "saying in advance that he won't stand up to McConnell if he abuses the filibuster."

In an interview with PolitiFact, Jackson reiterated his doubts about McConnell while also tying his support for the filibuster to the Kentucky senator’s actions.

"An early test will be voting rights legislation. If Sen. McConnell decides to filibuster it, that would be an example of something that should not be allowed to occur," Jackson said in a text exchange. "I am practically certain that he's going to abuse the filibuster to gridlock the Senate. If he does, the filibuster should be reformed."

The NRSC says "Erica Smith gets Jeff Jackson to flip-flop on the filibuster."

Jackson initially tied his support for the filibuster to McConnell’s actions, saying he wants to see whether the Republican leader will use it to try to block key legislation. And at the time, Jackson noted McConnell’s history of blocking legislation.

To date, it’s not clear that Jackson has deviated from that wait-and-see, middle-of-the-road position.

The NRSC sees Jackson’s tweets about Manchin as evidence he wants the filibuster gone. Jackson says that’s not the case. He says he’s frustrated that Manchin has dug in his heels to preserve the filibuster so quickly.

At worst, Jackson has grown more fearful that McConnell will use the filibuster. It’s fair for the NRSC to point out that Jackson has become more outspoken, but there’s not enough evidence to definitely say he’s changed his position.

We rate this claim No Flip.

Press release from the National Republican Senatorial Committee on April 12, 2021.

Story by the Washington Post, "Manchin says there is ‘no circumstance’ where he would vote to get rid of or ‘weaken’ the filibuster in blow to Biden agenda," posted April 7, 2021.

Fact checks by PolitiFact, "Chase half flips on pledge not to launch independent bid for governor," posted April 12, 2021; "Sen. Thom Tillis flip-flops on filling a Supreme Court vacancy in an election year," posted Oct. 27, 2020; "Did Sen. Bill Nelson flip-flop on use of filibuster for a Supreme Court nominee?" posted March 9, 2017; "Harry Reid among flip-floppers on Senate's 'nuclear option,’" posted Nov. 22, 2013.