Facebook posts
stated on July 1, 2021 in a Facebook post:
A Marine painted his house red, white and blue after he "was told by his neighbors that he could not fly the American flag in his yard all year long."

In the leadup to July 4, an image circulating on Facebook is celebrating a Marine who Facebook users say painted his house red, white and blue to stick it to his neighbors.

"Nice paint job!" one such post says below a photo of the house. "This Marine was told by his neighbors that he could not fly the American flag in his yard all year long. This is his response."

Various posts from June and July were flagged as part of Facebook’s efforts to combat false news and misinformation on its News Feed. (Read more about our partnership with Facebook.)

The house painted like the American flag is real, as is the photo highlighted in the Facebook posts, which shows several ladders set up on the deck and against the house. But the story told by the Facebook posts about the origins of the house’s design is not accurate. 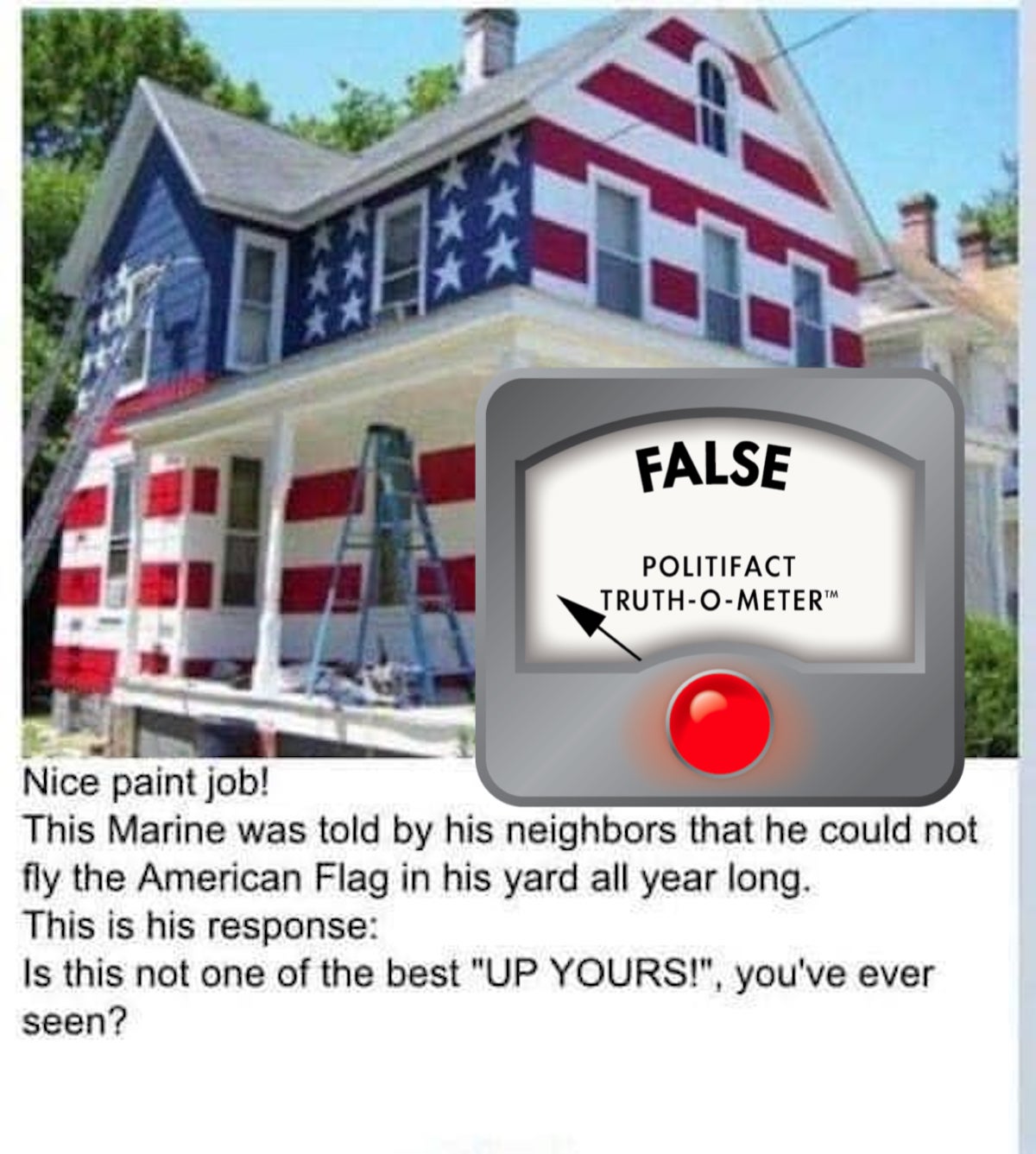 The one-of-a-kind property is located in Cambridge, Md., a city on the Chesapeake Bay. It has been featured on a travel website, and it can be seen via Google Maps. It is still painted like a flag, said Pat Escher, the division manager for Cambridge’s planning and zoning division.

Using TinEye, a reverse image search engine, PolitiFact found versions of the same photo of the house from as early as 2013. Snopes fact-checked a claim about the same photo in 2014.

Branden Spear, a contractor and the owner of the property, told PolitiFact that he painted the exterior of the house red, white and blue in 2012 following a dispute with Cambridge’s Historic Preservation Commission. He was frustrated with the commission at the time because local building inspectors had objected to the windows he was using to restore a nearby property he had purchased across the street.

"The problem started with the neighboring property," Spear said. "After buying the property, I started to replace the existing vinyl windows, and I saw a commission came to me and said they had to go back to original wood windows. This would increase the cost to around $30k!"

"The flag house was done up for fun against the commission," Spear continued. "The house has 45 stars, just like the year it was built (in the) early 1900s."

Spear said that he is not a Marine, and that he has never had any trouble with neighbors over the American flag, as the Facebook post claims.

He also discussed the inspiration behind the house during a local news segment in 2019.

Escher said she knew of no provision in the city about flying the American flag.

False claims about the house, like the ones circulating on Facebook, have been around for years and tend to crop up around national holidays, AFP Fact Check reported.

Lead Stories, "Fact Check: House Was NOT Painted American Flag Colors Because Owner Was Told He Could Not Fly American Flag All Year Long," July 1, 2021