Dr. Anthony Fauci, director of the National Institute of Allergy and Infectious Diseases, listens during a Senate Appropriations Subcommittee hearing on May 26, 2021. (AP)

• We found nothing in Dr. Anthony Fauci’s publicly disclosed emails to indicate that he urged a close relative to use hydroxychloroquine.

• Fauci was consistent in his emails in arguing that anecdotal evidence suggesting hydroxychloroquine’s efficacy against the coronavirus would need to be demonstrated in a controlled clinical trial before recommending its use.

• Fauci’s stance in his private emails mirrored what he said publicly.

Some social media users are seeking to tar Dr. Anthony Fauci, the head of the National Institute of Allergy and Infectious Diseases, as a hypocrite for how he handled his high-profile role as a scientific expert during the coronavirus pandemic.

A June 21 post claimed to have found a smoking gun in a batch of emails that Fauci sent early in the pandemic that were obtained by BuzzFeed and the Washington Post through a Freedom of Information Act request and published June 1. 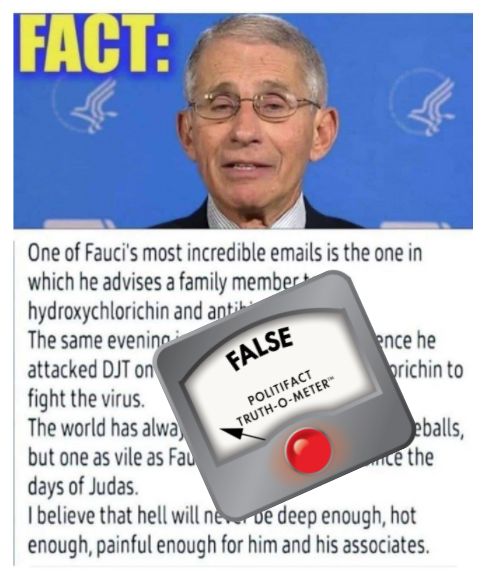 We looked through the searchable database of Fauci’s publicly released emails and found some references to hydroxychloroquine, but nothing that matched the duplicity alleged in the Facebook post. All told, we found no indication that Fauci’s private comments were inconsistent with his public views of the drug, including what he said at White House press briefings.

The post was referring to hydroxychloroquine, a drug that’s well-established in the treatment of lupus, rheumatoid arthritis, and malaria and which attracted attention early in the pandemic as a possible treatment of COVID-19.

In early 2020, two small trials, including one that used hydroxychloroquine along with the antibiotic azithromycin, reported that the virus was essentially gone in five days. But the research society that published that article later renounced it, saying it didn’t meet its standards.

Then-President Donald Trump championed the drug, despite skepticism from many medical experts, including Fauci, who cautioned that the evidence of the drug’s efficacy was anecdotal and needed to be confirmed by high-quality studies, especially since the drug carries a particular risk for people with heart problems, as well as other possible side effects.

A clinical trial was conducted by the National Institutes of Health to see whether the drug could be used as a treatment for COVID-19. The study was halted in June 2020 after it found hydroxychloroquine was "very unlikely to be beneficial to hospitalized patients with COVID-19."

Soon after, the Food and Drug Administration revoked a three-month-old emergency use authorization for the drug for the treatment of COVID-19. The FDA said taking the drug could potentially lead to serious side effects including "serious cardiac adverse events" and that any potential benefits "no longer outweigh the known and potential risks."

Mentions of hydroxychloroquine in Fauci’s emails

Hydroxychloroquine was specifically mentioned almost three-dozen times in Fauci’s emails, usually due to someone asking Fauci for his thoughts on the drug.

At no point in any of the publicly available emails sent by Fauci did he conclude that hydroxychloroquine was an effective treatment, much less urge a close relative to start using it.

On Feb. 24, 2020, a pharmacologist at the federal Food and Drug Administration asked Fauci whether there was any proof to back up a claim from China about hydroxychloroquine being able to "decrease COVID-19 infections and lung disease."

"There are no data in this brief report and so I have no way of evaluating their claim. There are a lot of these types of claims going around. I would love to see their data," Fauci responded.

In several subsequent emails asking about the drug, Fauci acknowledged the existence of anecdotal accounts about hydroxychloroquine’s effectiveness but said he was waiting on high-quality studies, like the one NIH was conducting.

On April 23, 2020, NIH press staff sent Fauci an email seeking to finalize language for a press release that said in his name, "Although there is anecdotal evidence that hydroxychloroquine and azithromycin may benefit people with COVID-19, we need solid data from a large randomized, controlled clinical trial to determine whether this experimental treatment is safe and can improve clinical outcomes."

In his response to the email, Fauci wrote that the draft language "looks fine."

Fauci’s emails echoed statements he made publicly about the drug, which were to withhold any official position until a controlled clinical trial was complete.

His most extensive comments on hydroxychloroquine from the White House briefing room were in March 2020. At the time, a reporter asked Fauci about whether there was evidence that hydroxychloroquine might be effective against the coronavirus.

"The answer is no," Fauci responded, adding that the reporter was talking about anecdotal evidence that "was not done in a controlled clinical trial, so you really can't make any definitive statement about it."

"The president is talking about hope for people. And it's not an unreasonable thing: to hope for people. So when you have approved drugs that physicians have the option and a decision between the physician and the patient, are you going to use a drug that someone says, from an anecdotal standpoint, not completely proven, but might have some effect? There are those who lean to the point of giving hope and saying, ‘Give that person the option of having access to that drug.’

"And then you have the other group — which is my job, as a scientist — to say my job is to ultimately prove, without a doubt, that a drug is not only safe, but that it actually works. Those two things are really not incompatible, when you think about that, particularly when you're in an arena where you don't have anything that's proven."

A Facebook post said that one of Fauci's "most incredible emails is the one in which he advises a family member to use (hydroxychloroquine) and antibiotic therapy, the same evening in which in a press conference he attacked (Trump) on the usefulness of  (hydroxychloroquine) to fight the virus."

We found nothing in Fauci’s publicly disclosed emails that supports the claim that he urged a close relative to use hydroxychloroquine. To the contrary, Fauci in his emails was consistent in arguing, both publicly and privately, that anecdotal evidence supporting hydroxychloroquine’s efficacy in the pandemic would need to be demonstrated in a controlled clinical trial before its use could be recommended.

Andy Nguyen contributed to this article.

Washington Post, "Anthony Fauci’s pandemic emails: ‘All is well despite some crazy people in this world,’" June 1, 2021

Buzzfeed, "Anthony Fauci’s Emails Reveal The Pressure That Fell On One Man," June 1, 2021

Lead Stories, "Fact Check: Draft Research About Hydroxychloroquine As COVID-19 Drug Does NOT Yet Warrant Calling It A Cure," June 10, 2021

medRxiv, "Observational Study on 255 Mechanically Ventilated Covid Patients at the Beginning of the USA Pandemic," May 31, 2021

U.S. Food and Drug Administration, "Chloroquine or Hydroxychloroquine With or Without Azithromycin," Oct. 9, 2020

National Institutes of Health, "NIH begins clinical trial of hydroxychloroquine and azithromycin to treat COVID-19," May 14, 2020

PolitiFact, "Hydroxychloroquine and coronavirus: what you need to know," April 8, 2020