President Joe Biden steps off Air Force One to board Marine One at Andrews Air Force Base, Md., on May 19, 2021, for a trip back to the White House after speaking at the commencement for the U.S. Coast Guard Academy in New London, Conn. (AP/Harnik)

In a falsehood-filled attack on President Joe Biden’s administration, Eric Trump wrongly claimed that the White House under Biden is not traveling — to the border, overseas, or anywhere.

"There’s no fight coming out of the White House," Trump, the second son of former President Donald Trump, told Fox News host Sean Hannity May 18. "There’s no one there. They don’t travel. They don't go down to the border. They don't go overseas."

The ongoing coronavirus pandemic has affected Biden’s transition into office, but Trump’s claim about White House travel and work is wrong. Previously, he criticized Biden for traveling on the job too often, calling Biden’s weekend trips to his home state of Delaware "heartbreaking."

The Trump Organization and former president’s office did not respond to requests for comment.

The Biden White House is not empty 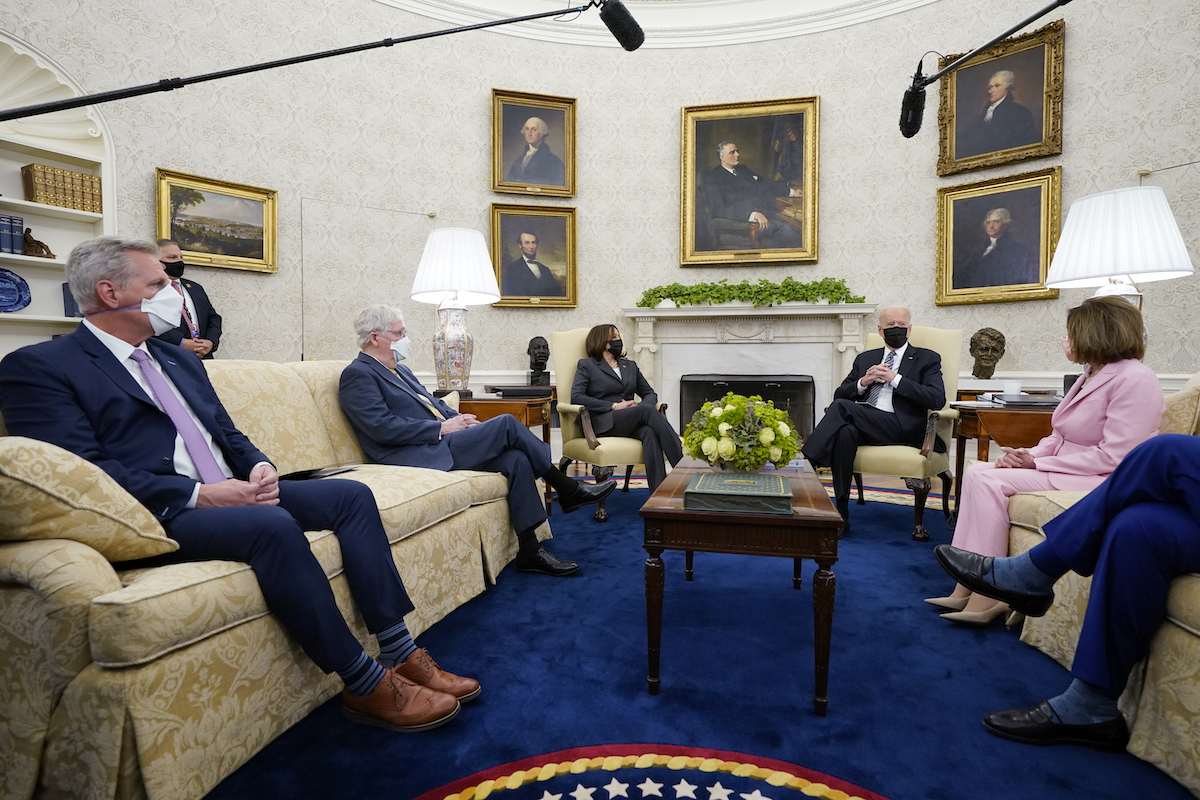 President Joe Biden meets with congressional leaders in the Oval Office of the White House on May 12, 2021, in Washington. (AP)

Trump’s claim that "there’s no one there" in the White House is inaccurate.

The Biden White House has maintained a slimmed-down in-person workforce because of the coronavirus pandemic, but it is gradually returning people to the office environment.

"Today, those who physically come into work vary in the West Wing," Politico reported May 6. "Most senior advisers around Biden are in the office every day."

The administration includes Biden’s Cabinet, made up of the 15 agency heads and other senior officials, such as White House Chief of Staff Ron Klain. The president has also announced his intent to nominate 233 people to serve in Senate-confirmed positions across the executive branch, according to a White House fact sheet about his first 100 days in office. 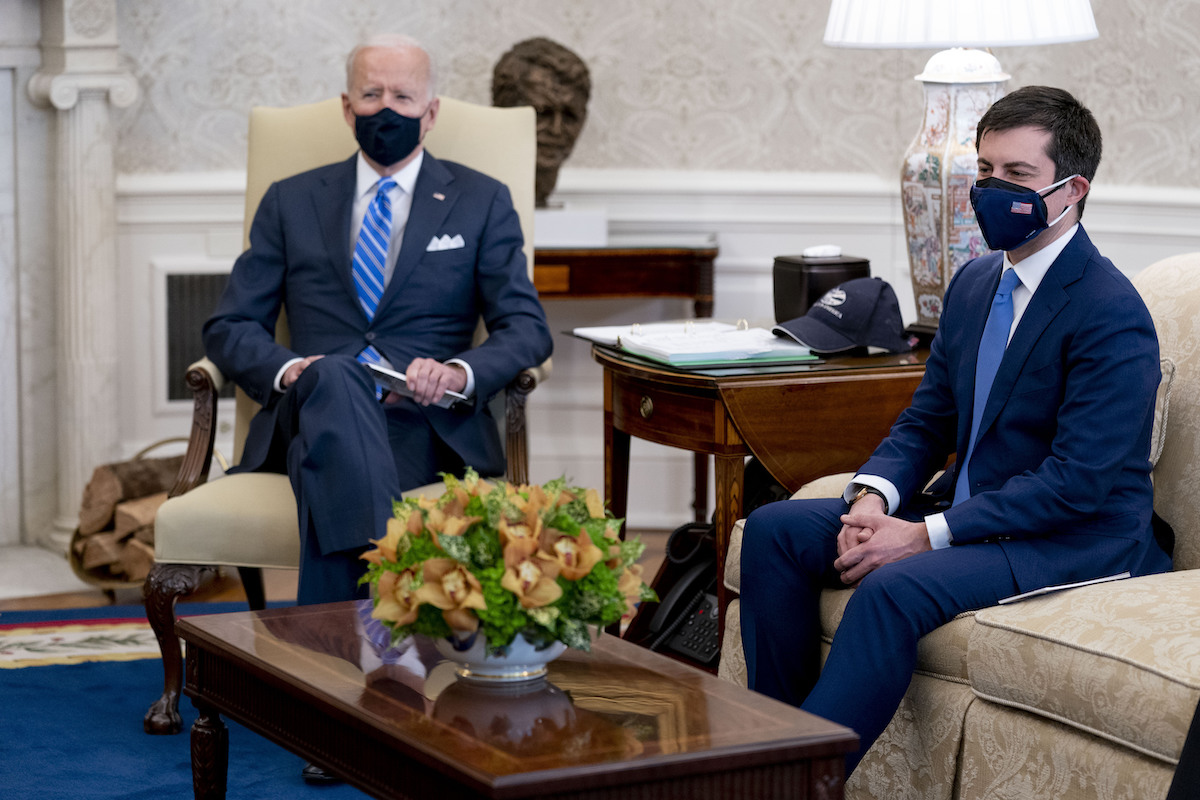 President Joe Biden and Transportation Secretary Pete Buttigieg, a member of Biden's Cabinet, meet with Vice President Kamala Harris and members of the House of Representatives in the Oval Office of the White House in Washington on March 4, 2021. (AP)

In April, Biden hosted Japanese Prime Minister Yoshihide Suga, the first in-person visit of a world leader during his presidency. 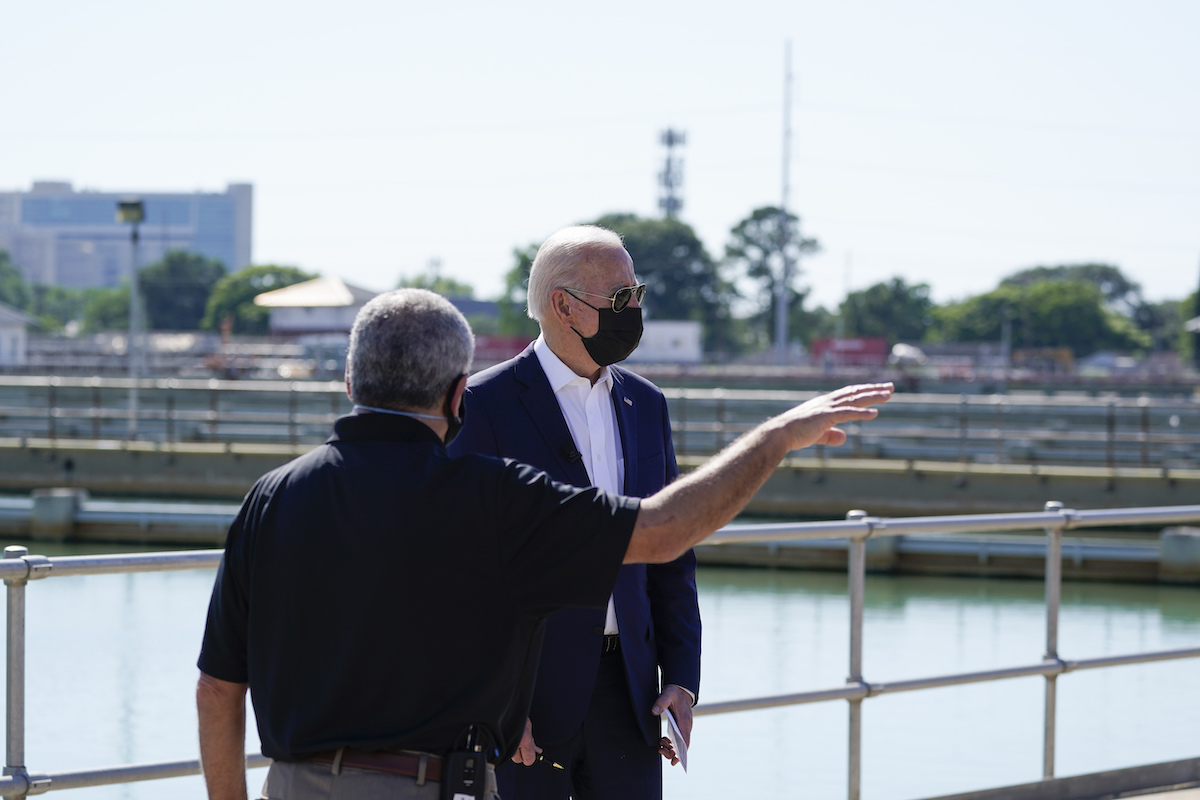 Trump’s claim that Biden and his administration haven’t been traveling is also inaccurate.

On May 18, the same day Trump accused the Biden administration of staying put, Biden had traveled to Dearborn, Mich., where he spoke at Ford’s electric vehicle center and test-drove the company’s new electric truck. Hannity highlighted portions of Biden’s remarks from that visit on his show.

In addition to those trips and his time spent at his home Delaware, Biden has also traveled to Georgia, Ohio, Virginia, Maryland, Pennsylvania, Louisiana, Wisconsin and Texas. He has delivered remarks, toured vaccination sites and public health agencies, visited wounded soldiers at Walter Reed National Military Medical Center, and participated in ceremonies such as the laying of a wreath at the Tomb of the Unknown Soldier at Arlington National Cemetery.

His first major trip as president outside the Washington area was in February, when he flew to Milwaukee to participate in a CNN town hall.

Vice President Kamala Harris, first lady Jill Biden and other members of the White House have also traveled beyond Washington, both with the president and without him.

Similarly, Secretary of State Antony Blinken, Defense Secretary Lloyd Austin and John Kerry, a special presidential envoy on climate, have all traveled overseas, among other officials. 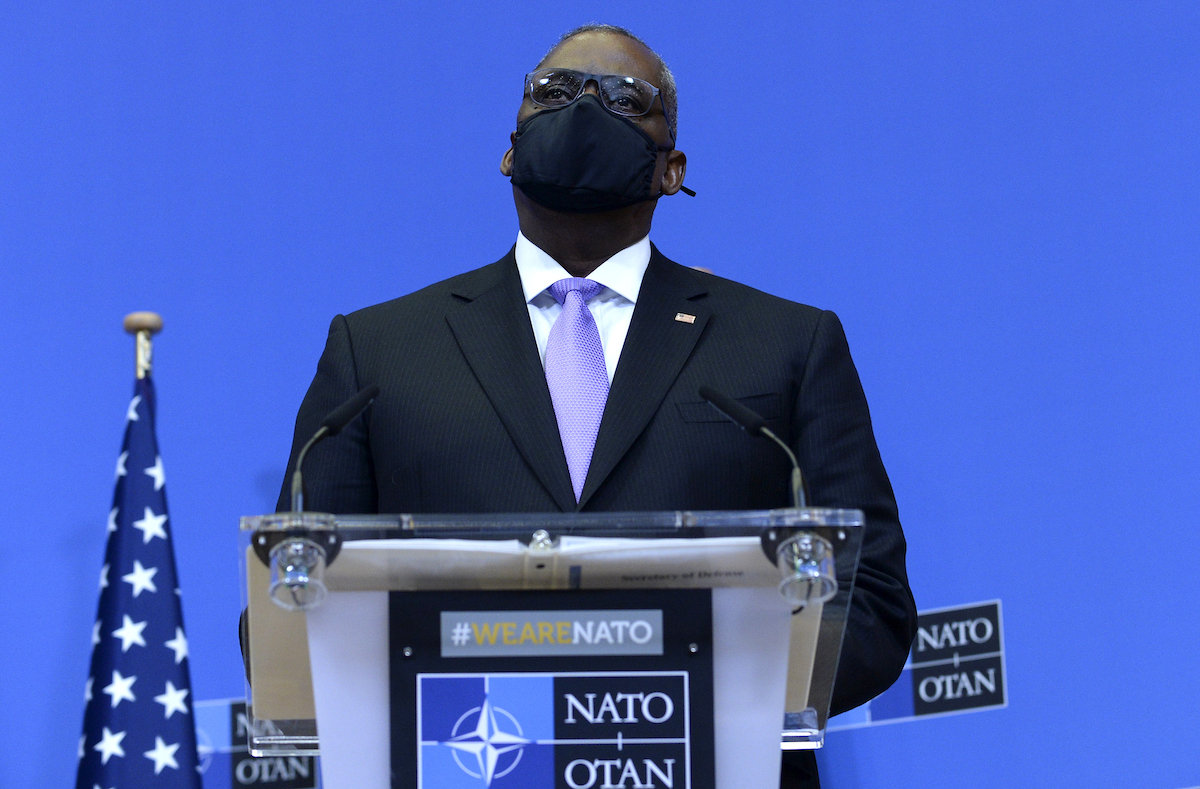 On May 18, the day Trump made his false claim, Blinken was in Iceland as part of a trip that also included a visit to Denmark. Kerry was in Berlin that day, rounding out an overseas tour that included stops in Rome and London.

Blinken has also traveled to Japan, South Korea, Belgium and Afghanistan, according to a list of his foreign trips. Austin joined Blinken in Japan and South Korea in March and went to Israel, Germany and Belgium in April.

Kerry has also made trips to London, Brussels and Paris, and to the United Arab Emirates, India and Bangladesh. 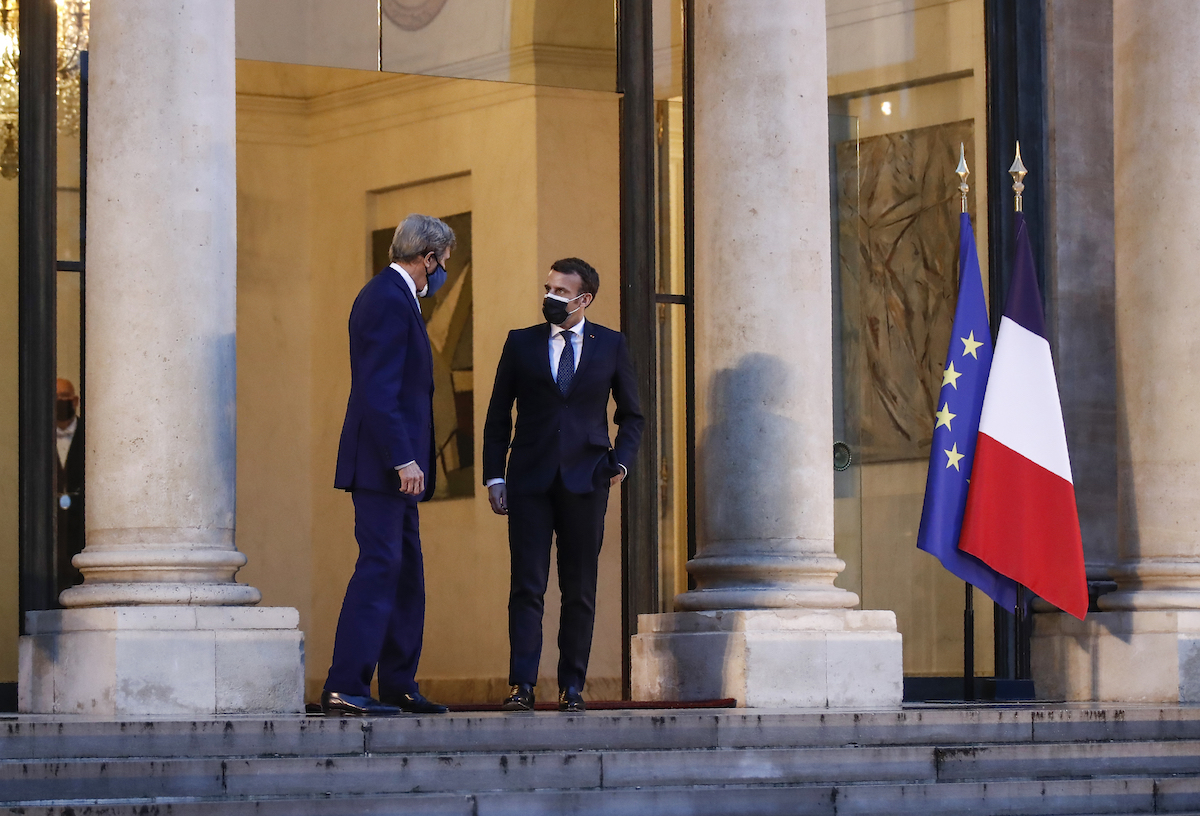 Special Presidential Envoy for Climate John Kerry speaks with French President Emmanuel Macron at the Elysee Palace in Paris on March 10, 2021, after a meeting. (AP)

Biden, who has been in office for about 120 days, has not traveled himself to the southern border or abroad, although he has pledged to go to the border "at some point." He is scheduled to make his first overseas trip as president in June. He will attend the G-7 Summit in the United Kingdom and NATO Summit in Brussels.

Donald Trump’s first foreign trip as president came in late May of 2017, when he traveled to the Middle East and Europe. That was about 120 days after he took office.

That’s wrong on every point. The coronavirus has kept some White House staff working away from the White House grounds, but it’s not true that "there’s no one there."

Biden has made several trips, including a visit to Michigan the day Trump made his claim. Other members of Biden’s White House and Cabinet have traveled to the border and overseas.

The White House on YouTube, "President Biden Delivers Remarks on the American Jobs Plan," May 6, 2021

CBS News, "Harris to travel to Mexico and Guatemala in first foreign trip as vice president," May 5, 2021

The White House on YouTube, "President Biden and the First Lady Deliver Remarks at Tidewater Community College," May 3, 2021

The White House, "Statement by Press Secretary Jen Psaki on the President’s Travel to the United Kingdom and Belgium," April 23, 2021

Reuters, "Biden to visit border 'at some point', says migrants should apply from home," March 21, 2021

The White House on YouTube, "President Biden and Vice President Harris Visit the Centers for Disease Control and Prevention," March 19, 2021

The White House, "Readout of Visit to the Border Region by Senior Administration Officials," March 7, 2021