Viral image
stated on October 5, 2021 in a viral image:
Facebook planted Frances Haugen as its own pretend whistleblower.

Former Facebook employee and whistleblower Frances Haugen testifies during a Senate Committee on Commerce, Science, and Transportation hearing on Capitol Hill on Oct. 5, 2021, in Washington. (AP)

A viral image circulating on social media baselessly claimed that former Facebook employee Frances Haugen, who turned over troves of internal company documents to the Wall Street Journal, was not a real whistleblower, but a plant set up by Facebook itself.

"Imagine planting your own whistleblower to expose yourself for not censoring enough so you can censor more," the image said in a text caption, which was overlaid on top of a photo from Haugen’s Oct. 3 interview with CBS News’ "60 Minutes."

Posts sharing the image received nearly 25,000 interactions on Facebook and Instagram, according to data from CrowdTangle, a social media insights tool.

They were flagged as part of Facebook’s efforts to combat false news and misinformation on its News Feed. (Read more about our partnership with Facebook.)

But PolitiFact found no evidence that Facebook planted Haugen to pretend to speak out as a whistleblower — a claim that Facebook told us was not true. 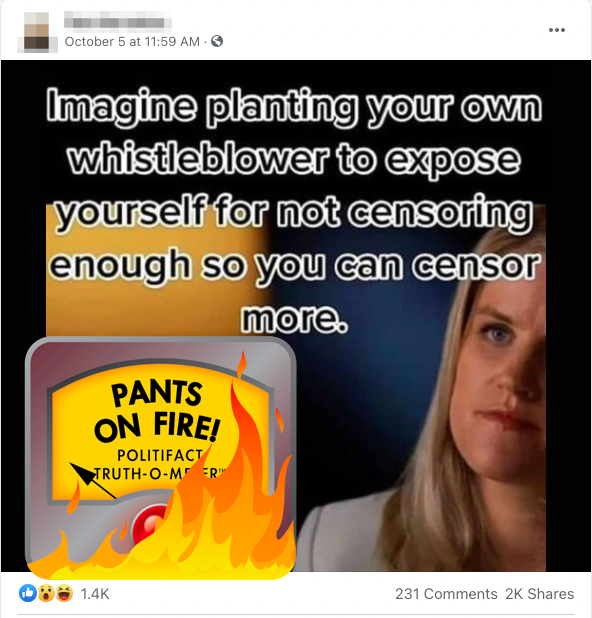 Haugen, 37, left Facebook in May after nearly two years with the company. She was recruited to the social media giant as a product manager on the civic misinformation team, according to her recently created website. She previously worked for Google, Pinterest and Yelp.

In her final days at Facebook, Haugen parsed through internal company documents, copies of which she later provided to Wall Street Journal reporter Jeff Horwitz, who covers technology.

The documents formed the basis for the newspaper’s multi-part series, the Facebook Files, which reported on Facebook’s tiered system for elites who violate platform policies, Instagram’s impact on teenage girls’ mental health and body image, and other revelations.

"We are confident in the legitimacy of our sourcing and rigorous vetting of the documents, and we stand by our reporting," said Wall Street Journal spokesperson Steve Severinghaus.

Horwitz first heard from Haugen late in 2020, and their reporter-source relationship spanned 10 months, during which time Horwitz referred to her by the pseudonym "Sean." Haugen used the same alias in communications with lawyers at Whistleblower Aid, a nonprofit that represents people reporting corporate and government misbehavior, the New York Times reported.

Haugen filed at least eight whistleblower complaints with the Securities and Exchange Commission based on the documents she gathered, according to "60 Minutes."

She also testified about her role and experience at Facebook before Congress. "I saw Facebook repeatedly encounter conflicts between its own profit and our safety. Facebook consistently resolved these conflicts in favor of its own profits," Haugen said in her Oct. 5 testimony.

In response, Facebook said in a statement that she "worked for the company for less than two years, had no direct reports, never attended a decision-point meeting with C-level executives — and testified more than six times to not working on the subject matter in question."

Facebook and CEO Mark Zuckerberg have also disputed some claims made by Haugen and the Wall Street Journal in various statements.

A viral image claimed that Facebook planted Haugen as a pretend whistleblower.

PolitiFact found no evidence that Haugen was acting as a plant when she leaked documents to the Wall Street Journal, filed whistleblower complaints with the SEC, appeared on "60 Minutes" and testified before Congress. A Wall Street Journal spokesperson said the organization stands by its reporting related to Haugen, and Facebook denied "planting (its) own whistleblower."

We rate the viral image Pants on Fire!

The Wall Street Journal, "The Facebook Whistleblower, Frances Haugen: Does the Law Protect Her?" Oct. 5, 2021

The Wall Street Journal, "The Facebook Whistleblower, Frances Haugen, Says She Wants to Fix the Company, Not Harm It," Oct. 3, 2021