Kimberly Klacik
stated on October 13, 2021 in a tweet:
An image of empty grocery store shelves shows the effect of President Joe Biden's “Build Back Better” plan.

UPDATE, Oct. 14, 3:30 p.m.: This fact-check has been updated to include additional comment from Kimberly Klacik. The rating is not changed.

"A look at #BuildBackBetter," Klacik wrote above the photograph in the Oct. 13 post shared on Twitter, Facebook and Instagram. The hashtag was an apparent reference to "Build Back Better," Biden’s COVID-19 relief, economic and infrastructure plan.

Supply chain disruptions have affected grocery stores throughout the pandemic and continue to hit some U.S. markets especially hard, the Wall Street Journal reported in August.

But the photograph that Klacik shared is not from a U.S. store, nor was it taken during the Biden administration. 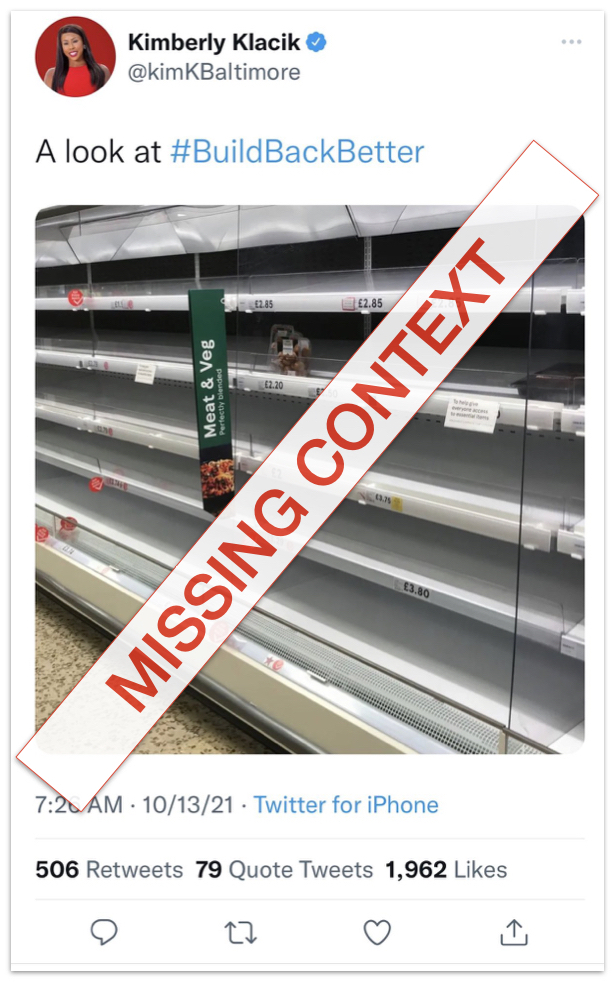 The giveaway was the prices shown on the shelves. They’re listed in British pounds, not U.S. dollars. The original photograph appeared with an editorial published by the Guardian on March 27, 2020, about supply-chain disruptions during the earliest wave of the pandemic. "Empty shelves at a Tesco store in Worcester," the Guardian’s photo caption says.

Klacik is a Republican who lost her 2020 campaign for a U.S. House seat representing most of Baltimore. She deleted the posts soon after posting them.

Asked about the posts, she told PolitiFact: "Build Back Better is used in the U.K." She didn’t say whether her posts were meant to refer to U.K. stores or economic policies.

British Prime Minister Boris Johnson has used the same slogan and hashtag to describe his Conservative government’s pandemic recovery plan. The Independent reported that Biden formally launched his plan first, but Johnson had been using the phrase throughout 2020.

After this fact-check was published, Klasic claimed that she deleted the posts to prevent confusion.

Even after Klacik deleted her tweet, screenshots of it remained online. PolitiFact was able to view the Facebook and Instagram posts via CrowdTangle, a social media insights tool. They were flagged as part of Facebook’s efforts to combat false news and misinformation on its News Feed. (Read more about our partnership with Facebook.)

We rate the posts False.

The Wall Street Journal, "Why You Can’t Find Everything You Want at Grocery Stores," Aug. 22, 2021

The Guardian, "The Guardian view on empty supermarket shelves: panic is not the problem," March 27, 2020