Occupy Democrats
stated on April 5, 2022 in a Facebook post:
Josh Mandel doctored an image in a campaign ad but "forgot to Photoshop the hands that clearly show he put his face on the body of a Black soldier."

The ad drew strong criticism, and some on social media accused Mandel of editing himself into a photo with Black Marines for the spot — claims the Mandel campaign called false.

The campaign released the ad April 5 on Twitter and YouTube. The 30-second spot cuts between images from Mandel’s service in the Marine Corps to Mandel on and near the Edmund Pettus Bridge in Selma, Alabama, where King marched for civil rights in 1965.

"Martin Luther King marched right here so skin color wouldn’t matter," Mandel says in the ad. "I didn’t do two tours in Anbar Province, fighting alongside Marines of every color, to come home and be called a racist. There’s nothing racist about stopping critical race theory."

An unsubstantiated Twitter rumor asserted that Mandel had edited his face into one of the ad’s photos, which showed him alongside five other uniformed troops, all of whom appear to be Black. Some social media users noted with suspicion that in the image, Mandel’s hands appear darker than his face. Some also pointed out that Mandel appears to be the only person with his name on his uniform.

Some Twitter users shared posts alleging that Josh Mandel edited himself into a photo in his recent ad.

"Breaking news: Ohio pro-Trump U.S. Senate candidate Josh Mandel puts a photo of himself standing with Black soldiers in his latest campaign ad," Occupy Democrats wrote in a post shared on both Facebook and Instagram. "The only problem is that he forgot to photoshop the hands that clearly show he put his face on the body of a Black soldier." 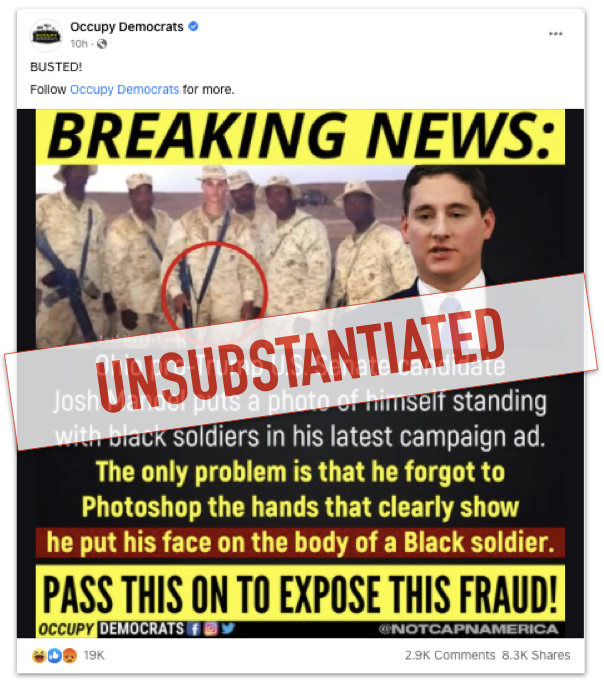 Occupy Democrats claimed in this April 5 Facebook post that Josh Mandel edited himself into a photo in his recent ad.

Scott Guthrie, a spokesperson for Mandel, said the charges of photoshopping are "totally false."

Guthrie provided PolitiFact and reporters at Politico, NBC News and the Associated Press with another version of the image in question, which he said was the original photo. In that version of the image, Mandel’s hands do not appear to be as dark as in the ad. 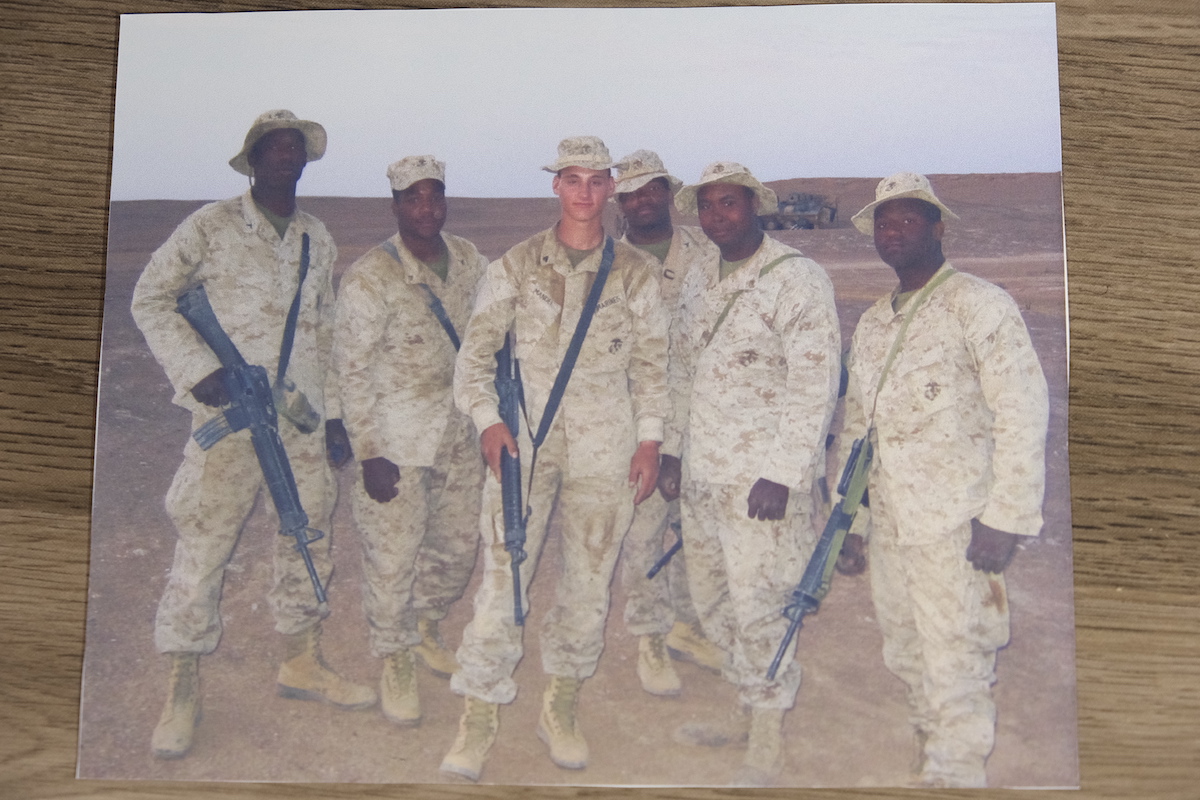 Josh Mandel's Senate campaign shared what they said was an original version of the photo from his recent ad. (Josh Mandel for U.S. Senate)

Fred Davis, a Republican consultant who creates ads for Mandel, told PolitiFact that the version of the image that showed up in the ad reflected efforts by the video editor to make sure the text directing viewers to the campaign’s "JoshMandel.com" web address showed up on the video. He said it "was vignetted slightly by the editor to make sure the URL white type was legible."

The bottom halves of the other soldiers in the ad version of the photo also appear darker than their faces, as do the weapons they are holding.

PolitiFact ran reverse image searches and found no prior versions of the photo, with or without Mandel. Occupy Democrats did not respond to requests for comment but has since removed its post from Facebook.

PolitiFact also asked four digital forensics experts who know how to detect image manipulation about the social media allegations claiming that Mandel photoshopped his head onto the body of a Black soldier. All four said that the image as seen in Mandel’s ad, and the photo provided by his campaign, are both too low-quality to conduct a reliable, definitive analysis.

The ad version of the photo includes other possible inconsistencies related to its lighting and pixelation, but the quality is so low that it's impossible to determine whether they are the result of Photoshop, video compression or other factors, said Hany Farid, a professor at the University of California, Berkeley.

"Analyzing the frame in the video isn't really possible because the image has been post-processed, converted to video, further post-processed, then compressed," said Matthew Stamm, an assistant professor of electrical and computer engineering at Drexel University.

Stamm analyzed the other file that Mandel’s campaign shared with PolitiFact. He found "no evidence of manipulation" and said it seems "very plausible that the image is real," but he also cautioned that his analysis "isn’t really conclusive" because that version of the image could have theoretically been altered and then printed, photographed and shared.

A conclusive analysis would require the original photo in digital form, and the Mandel campaign said it does not have that. "It’s an 18-year-old photo taken in Iraq that was printed," Guthrie said.

The campaign did not provide information about the other people in the photo, and the Marine Corps said it was not able to do so. But if the photo shared by the campaign really is 18 years old, then "that makes it less likely to have been digitally manipulated," Farid said.

"Visually comparing both versions, it is unlikely to me that the (version in the ad) was a result of Photoshop editing," added Siwei Lyu, a professor of computer science and engineering and the director of the UB Media Forensic Lab at the University of Buffalo.

Occupy Democrats said Mandel doctored an image in a campaign ad but "forgot to Photoshop the hands that clearly show he put his face on the body of a Black soldier."

The liberal group’s claim is based on social media users’ observations that Mandel’s hands appear darker than his face in a photo showing him beside Black soldiers in a recent ad.

No other evidence has conclusively substantiated the alleged photoshopping. The ad’s creator, meanwhile, said Mandel’s hands appeared darker in the ad because the photo had been vignetted in order to highlight the white text at the bottom directing viewers to Mandel’s website.

PolitiFact places the burden of proof on the speaker of the claim. Because the claim is unproven, we rate it False.

Email interview with Hany Farid, professor, associate dean and head of school at the University of California, Berkeley School of Information, April 6, 2022

Email interview with Siwei Lyu, professor of computer science and engineering, founding co-director of the Center for Information Integrity and director of the UB Media Forensic Lab at the University of Buffalo, April 6, 2022

Email interview with Catalin Grigoras, associate professor and director of the National Center for Media Forensics at the University of Colorado, Denver, April 6, 2022