Widespread videos claiming to show the explosion that sank the Moskva, the premier Russian Black Sea warship, continue to rack up views across social media, even though the videos show the wrong ship.

One such video was uploaded to TikTok on April 14, the same day the missile cruiser sank. Russia and Ukraine offered differing explanations: Ukraine claimed that it took out the ship with missiles, a position supported by U.S. officials, while Russia blamed a fire on board and only recently acknowledged casualties.

The TikTok video has since amassed more than 16.5 million views. Other versions of the same video, with similar captions falsely claiming it shows the Moskva, also appeared on other platforms such as Twitter and Facebook. 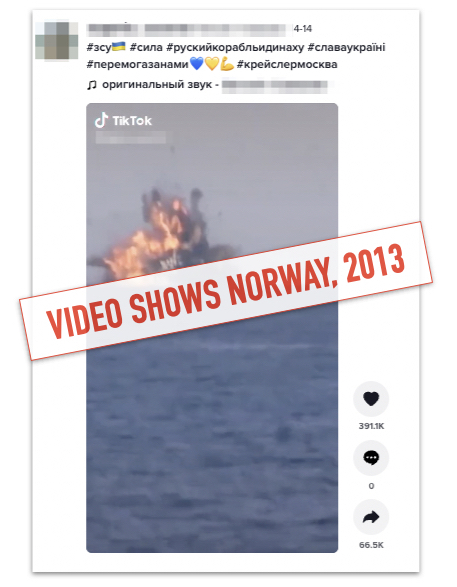 The footage seen in the viral videos predates the Russian war on Ukraine by almost a decade. Researchers and fact-checkers at Bellingcat, Reuters, Snopes and other organizations quickly identified the original source of the footage.

Reverse image searches show the video was taken off the coast of Norway in 2013. The Norwegian Navy blasted one of its own decommissioned ships with a missile as part of a military exercise meant to test out new weaponry. The same video was published online in 2013 by CNN, Military.com, and South West News Service, a British news agency.

"That is some serious Scandinavian firepower right there," CNN’s John Berman said in a June 2013 TV segment that played the footage. "That’s the Norwegian Navy blowing up one of its own ships to test out a new long-range stealth missile."

AFP Fact Check, "This video does not show the Moskva warship exploding -- it's a 2013 Norwegian military exercise," April 25, 2022