Ukrainian President Volodymyr Zelenskyy answers questions during a press conference in a city subway under a central square in Kyiv, Ukraine, Apr. 23, 2022. (AP)

The first video digitally added a white, powdered substance on Zelenskyy’s desk during a video call with billionaire Elon Musk. The second video spliced together clips from an interview Zelenskyy gave in 2019 to give the false impression that he was endorsing taking cocaine.

Versions of both videos ricocheted across social media, spreading in different languages on platforms such as Twitter, Facebook, TikTok and Telegram.

Zelenskyy didn’t have cocaine on his desk

The video purporting to show cocaine on Zelenskyy’s desk first took off among pro-Russian Telegram channels, according to reports. It also cropped up on Facebook and other platforms. 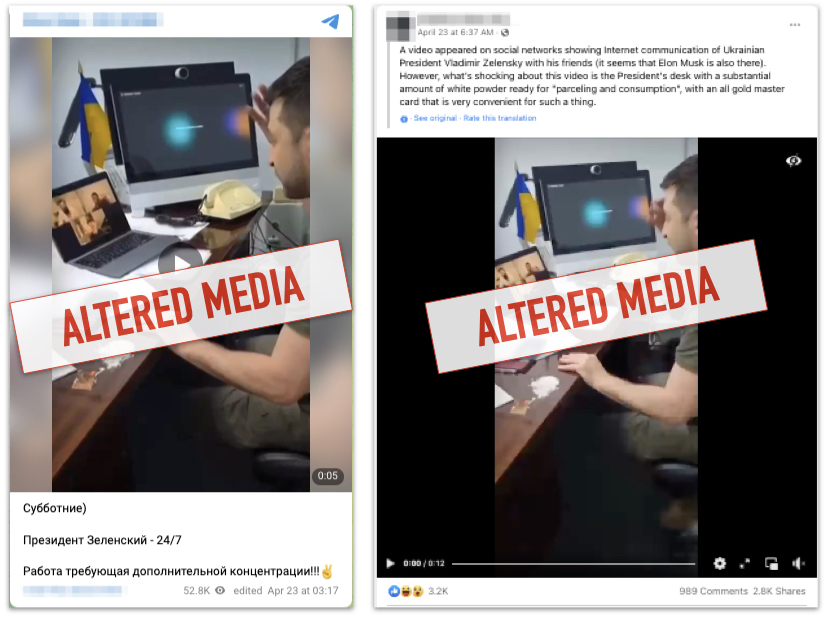 But the viral video was altered. The video took an authentic, 13-second clip that Zelenskyy posted to Instagram on March 5 and added a white substance — along with a credit card laid beside it.

The original video, which was also published online by news organizations such as the Guardian and the BBC, does not show the white substance or credit card on Zelenskyy’s desk. It shows Zelenskyy inviting Musk, whose aerospace company SpaceX delivered internet service equipment to Ukraine, to visit the country after the war with Russia.

Pro-Russian accounts are currently sharing a video (left) that has a big ol' pile of cocaine digitally added to smear Zelensky. The original video (right), sans cocaine, can be found here https://t.co/cChEsa7Sbj pic.twitter.com/JAfGsiEIDj

The second deceptively edited video, which was falsely billed as showing Zelenskyy signaling his approval for cocaine, circulated separately across many of the same platforms.

The video stitched together clips from a January 2019 interview Zelenskyy gave to Ukrayinska Pravda, an online news outlet in Ukraine.

The English subtitles attached to the viral video falsely claim that Zelenskyy, asked if he uses cocaine, responded: "Awesome! Awesome! Energy man number one. Seriously! This is energy for the whole day. At 7 a.m. I got up … And I do snort drugs. This is the mode. I live in it." 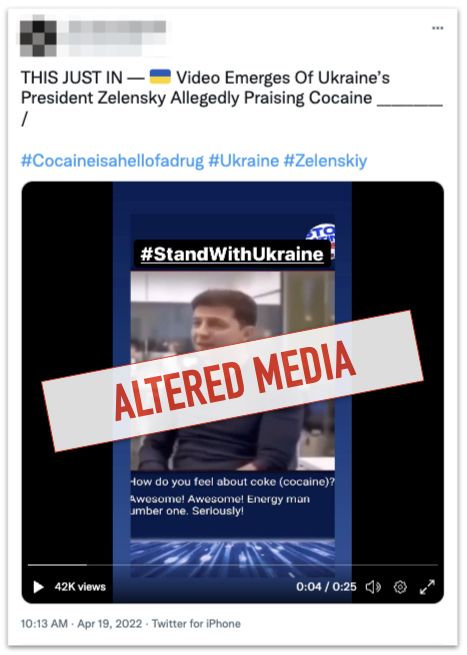 But in the original interview, after Zelenskyy was asked about an apparent rumor that he used cocaine, he denied doing so. According to English translations of his answers, Zelenskyy said he does not use drugs and later quipped that he is addicted to coffee.

The Associated Press offered one translation of Zelenskyy’s responses: "Great! Great! No, I’m sitting on something white, but it is a chair. It’s not cocaine. I don’t use drugs." Later, he said, "I breathe coffee, because I am very addicted to coffee. I really like coffee, it’s true."

In another part of the interview, Zelenskyy walked through his morning routine, describing his 7 a.m. wake-up to take his dog outside and exercise.

The altered video rearranged the words of Zelenskyy’s denial to leave viewers with the distorted impression that Zelenskyy admitted to regularly using cocaine.

Two videos claimed to show Zelenskyy either using or admitting to using cocaine.

The first video purports to show a white powder on Zelenskyy’s desk as he placed a video call to Musk. But the video was doctored to include the substance, which is not in the original.

We rate these videos Pants on Fire!

The Associated Press, "Video of Zelenskyy talking about cocaine is deceptively edited," April 26, 2022