Viral image
stated on February 15, 2022 in a Facebook post:
An image shows “a medical oddity that is characterized by having two pupils in each eyeball.”

An image of a wide-open eye with not one but two irises and pupils is being shared on social media with a description of a condition that might cause ophthalmologists to close their own in disbelief.

"The Pupula duplex is a medical oddity that is characterized by having two pupils in each eyeball," text appearing with the image says.

A post sharing it was flagged as part of Facebook’s efforts to combat false news and misinformation on its News Feed. (Read more about our partnership with Facebook.) 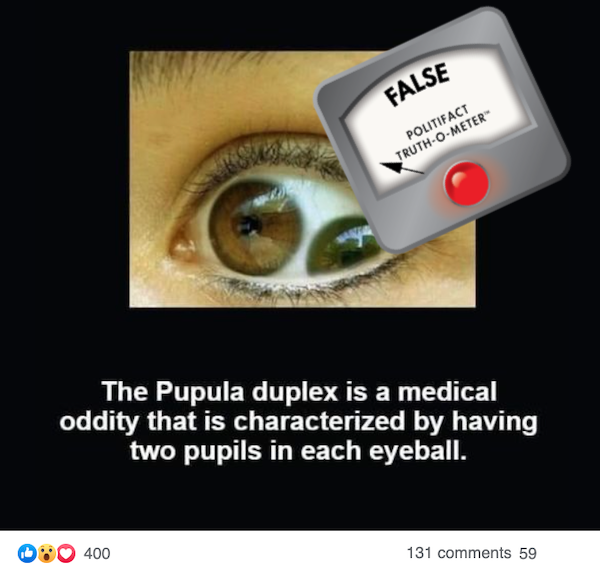 (Screenshot from Facebook)
Claudia Costabile, a spokesperson for the National Eye Institute, told us the image isn’t real.
There is "an extremely rare condition where there are two or more openings in the same iris," Costabile said. It’s called polycoria, and it can interfere with a person’s vision because each pupil, or opening, has its own sphincter muscle that makes the pupil contract and expand.
But it doesn’t look anything like the image circulating online. Rather, it looks like one pupil that has broken apart in the same iris, like ice that has fractured.
Yakesha Cooper, a spokesperson for the American Optometric Association, also told us that the image being shared on social media is fake.
"Pupula duplex is not a medical term that we are aware of," Cooper said
We rate claims that this picture shows a real eye condition False.

All About Vision, Polycoria causes, symptoms and treatments, visited Feb. 17, 2022

BuzzFeed, These Viral Pictures Of People With Two Irises Are Definitely Fake, Feb. 26, 2015

Facebook posts
stated on June 27, 2022 a post:
Planned Parenthood clinics are “closing down all over the country” because Roe v. Wade was overturned.