Tweets
stated on February 13, 2022 in a tweet:
Greenpeace USA had a banner on Trump International Hotel in Las Vegas making fun of Donald Trump’s genitalia.

The video plays on salacious claims made in 2018 by Stormy Daniels, an actress who claimed to have had an affair with Trump. The video appears to show a yellow banner created by the environmental group Greenpeace, with a slogan that uses Daniels’ description of Trump’s genitalia.

"Happening now at Trump Tower in Las Vegas," the poster behind the video wrote Feb. 13 on Twitter, where the 19-second clip received hundreds of thousands of views, and on Facebook, where it received tens of thousands more.

But the video is fake. It was flagged as part of Facebook’s efforts to combat false news and misinformation on its News Feed. (Read more about our partnership with Facebook.) 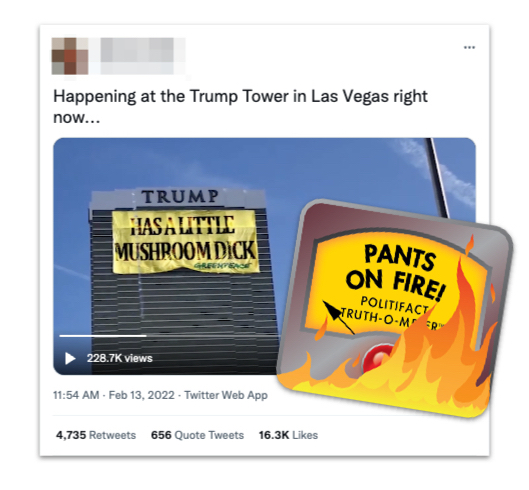 A video posted to social media Feb. 13 purported to show a derogatory anti-Trump banner hanging from his Las Vegas hotel.

The video was digitally edited to show a massive banner that never actually existed hanging from the very top of the 64-story Trump International Hotel in Las Vegas.

The video first circulated on social media several years ago, posted by someone who goes by the name Tom Adelsbach on Facebook and Paul Lee Teeks on Twitter.

"Show of hands," said a March 2019 post showing the same banner-hanging video on Adelsbach’s Facebook wall. "Who didn't know this was a fake video?"

But in tweets responding to comments about the video, Greenpeace USA said that it was the fake creation of an "artist," and that the organization "had nothing to do with it."

Reuters also identified the creator as Adelsbach, and he told the news organization that he "shot the video, and altered it." On Twitter, he wrote, "Who gives a s--- if someone physically climbed up and actually put that banner there — just think about how insanely angry it'll make all the (Trump supporters)."

In another tweet, he said that he previously made "like 5 variations of this, and each time it went viral and Snopes did an article debunking it."

Indeed, those variations of the video have been debunked by multiple fact-checking organizations, and Greenpeace USA has repeatedly denied involvement. The creator did not respond to requests for comment from PolitiFact.

Greenpeace activists raised a "resist" banner outside a Trump-owned hotel in Chicago in 2017, a few months after Trump took office. The banner appeared significantly smaller than the fake Greenpeace USA banner in the doctored videos circulating online.

AFP Fact Check, "This video of the Trump hotel in Las Vegas has been doctored to include the banner," Oct. 9, 2019

AFP Fact Check, "This video of the Trump hotel in Las Vegas has been doctored to include a ‘concentration camps’ banner," July 11, 2019